July 2 Someone to appeal to our better angels 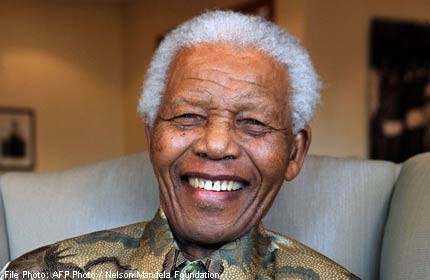 SINGAPORE - As South Africa continues to hold vigils for its fading father figure, the rest of the world too feels a sense of impending loss.

Mr Nelson Mandela, more than any other living hero, epitomises the power of hope over adversity. His life story brushes aside the barriers of cynicism. For if he could shrug off 27 years of imprisonment by a violent, racist regime and work with his former enemies to build a united, democratic nation, what excuse could anyone else have to surrender to despair and doubt.

After his release in 1990, you could have expected to see an angry, world-weary figure. But, in 1992, when a group of Singaporean journalists accompanied Mr Lee Kuan Yew to South Africa, we were greeted instead by a man with bright, shining eyes, a ready broad smile and an infectious laugh that belied his stolen years.

Of course, Mr Mandela had his doubters, with many pessimists noting that his party had no experience in managing the economy when he went on to become president.

Who would deny, though, the historic role that Mr Mandela played in one of the most inspiring democratic revolutions of the 20th century. By choosing reconciliation over retribution, he gave post-conflict societies a template for lasting peace.

Closer to home, that template is being applied in Myanmar. Once again, a key role is being played not just by a leader of the old regime who recognises that change is inevitable - President Thein Sein, who like South Africa's F. W. De Klerk has decided to move with the times rather than be crushed by them - but also by its most high-profile victim.

Both President and former prisoner of conscience appeared before the international media earlier this month when the World Economic Forum met in Myanmar's capital, Naypyidaw. No prizes for guessing who the star of the show was.

Now, this is no insult to Michelle Yeoh, but when Ms Aung San Suu Kyi first stepped into the room, my first thought was how the real person was more magnetic than the younger (by some 20 years) Hollywood actress who played her.

The Lady was luminous. Her gleaming eyes betrayed the energy within. Cellphones sprouted like mushrooms as she settled down in her seat as part of a panel about to be televised on the BBC. Even as the show was being taped, the phones peeked out now and again from among the memento-hungry audience.

The rallying figure behind the movement to free Myanmar from the shackles of a military junta, she embodied resolute resistance, but also showed a disarming, coquettish charm that years of unjust treatment had failed to diminish.

The headlines would later report her definitive declaration that she wanted to run for president. But then not even her most ardent fans believe she is the solution to all of Myanmar's problems - any more than Mr Mandela was to South Africa's.

This came through most clearly when she was pressed for her stand on Myanmar's treatment of the minority Rohingya community.

Observers moved by their plight long for some stirring expression of solidarity from the Nobel Peace laureate. But, as before, she would not be drawn into offering words of solace. Acknowledging that what she had to say was not very exciting, she stated that the rule of law was paramount and that security had to be enforced.

Later, at a press conference, the questions flew again. And again, she refused the bait. She did not want to take sides, she said, for fear of inflaming the situation before all the evidence was clear.

The moment illustrated the dilemma facing such leaders: how to represent lofty ideals while also dealing with ground realities. In Myanmar, one of those realities is that Buddhists make up nearly 90 per cent of the population, and do not regard Muslims as equal to them. Championing the Rohingya may exact a cost too great to bear, even for someone with as much capital as South-east Asia's only Nobel Peace Prize winner.

Indeed, some of her fans say it may be wiser to stay away from the tough decisions. Perhaps her true value is mainly symbolic.

The fading away of Mr Nelson Mandela and the entry of Ms Aung San Suu Kyi into mainstream politics are an occasion to think about the role of such icons in the life of a country.

They give hope, telling people not to underestimate the good they are capable of. They soothe and unite rather than divide. They persuade people to compromise for the common good, instead of wanting to win everything at any cost. They are also made by their times, shaped by the epic moments that summon them.

Singapore has never suffered as greatly as these other societies, which is perhaps why such figures are alien to us. Here, the ruling party has not had much patience for symbols in politics. It believes in technocratic solutions to problems, not soaring speeches or grand gestures.

Yet, perhaps the ability to rally citizens, to appeal to our better angels and set aside differences, is not an irrelevant quality for Singapore's leaders, especially as the country becomes more fractious.

Ms Suu Kyi repeated her famous quote, that hope is futile without endeavour. While those who are bearish about Myanmar question whether its endeavour will match its hope, many wealthier countries seem to suffer the opposite imbalance, emphasising endeavour but without hinging it to hopes for a more just society.

Maybe the welling emotion over the impending death of Mr Mandela is mainly about that sad realisation - the sense that our societies are still a long way off from the standards he set for sacrifice and selfless dedication to a greater good.