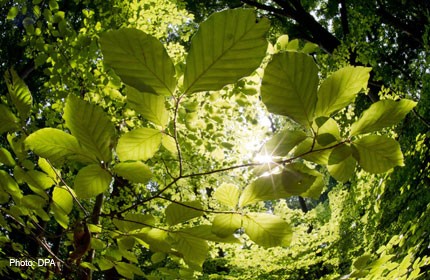 PARIS - The larva of a Vietnamese moth has devised a unique form of transport - constructing a leaf cone and thrashing about inside to make it jump, a study showed Wednesday.

Even more remarkably, the tiny caterpillar manages to steer its leafy vehicle in a clear direction along the forest floor - but always away from the Sun, Canadian scientists wrote in the journal Biology Letters, published by Britain's Royal Society.

The team believes the creature is in pursuit of shade. Dehydration seems to pose a bigger death risk even than ant predators on the ground.

"We believe the largest risk the insect faces is from overheating and drying out, so it would be beneficial to find a cool, shady place to be," Kim Humphreys from the Royal Ontario Museum's Department of Natural History told AFP.

The caterpillar of the moth Calindoea trifascialis wraps itself in a leaf cone about two weeks after hatching from an egg.

The cone, which protects the creature for about another two weeks until it emerges as a moth, falls to the ground and starts hopping around - presumably looking for a safe spot.

"They jump about one jump per second, and about three quarters of a centimetre (0.3 inches) per jump. They are not fast or high jumpers," said Humphreys.

"They jump for usually three days, usually during the daytime only," before settling down for the pupa to develop into a moth.

Such acrobatics by larvae is not unknown - there is the well-known example of the Mexican "jumping bean" which is in fact a seed pod with a larva hopping about inside.

But the Calindoea trifascialis caterpillar is unique in that it builds its own vehicle and uses a novel propulsion method, according to the authors who studied hundreds of pupae that behave in this way.

Its movements are also not as random as those of other insects.

To jump, the Calinda trifascialis caterpillar fixes hind foot-like organs called prolegs to one end of the leaf inside before thrashing its front body backwards, arching upward.

Its back strikes the inner top of the shelter, propelling the cone up and backwards.

Videos of the jumping larva can be viewed at the museum's YouTube channel: