June 11 Vain and proud of it 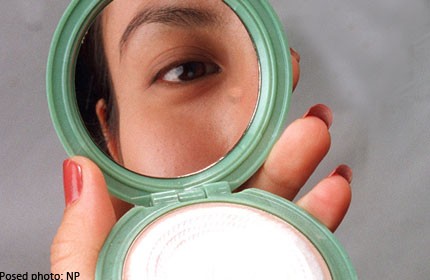 Mirror, mirror on the wall. Who's the fairest in the mall?

If it's not me, I'm likely to get pretty upset.

I might even start preening around in front of the mirror in the shopping centre washroom.

Because, when it comes to personal grooming, I've a confession to make.

I'm vain - and proud of it. That's a double dose of deadly sins right there.

You see, vanity has always had a bad rep. The Oxford English Dictionary defines it as "that which is vain, futile or worthless".

But my question is: What's so worthless about making sure you look good at all times?

Personally, I can't think of a better way to get ahead in life (except the obvious ones such as hard work, a can-do attitude and having a rich dad).

If you think I'm talking simply about looking presentable, think again. In this preening modern world of celebrity Botox jabs and misleadingly glamorous Facebook profile pictures, only the vainest survive.

That's why I refuse to leave the house without plastering my hair with wax and slapping on the sunscreen in a desperate bid to avoid wrinkles.

When American singer Carly Simon crooned "You're so vain, you probably think this song is about you", she was rumoured to be taking a dig at a former lover. But had it been aimed at me, I'd have taken it as a compliment.

Because for those who care about the way they come across to others in a competitive society, a dose of vanity can only be a good thing.

For a start, it motivates us to stay healthy. No vain person wants to become a junk food-munching couch potato. That's just not a good look.

Then there are the obvious social benefits that being well-groomed can bring - just so long as you don't end up tipping over into full-blown narcissism and posting endless pictures of yourself posing in the mirror with a smartphone.

I'm not saying I always look immaculate. Far from it. But at least I try.

When you've given up on personal grooming, the message is clear - you've given up on life. Who's going to take a man seriously if he's shuffling along in slippers and an oversized T-shirt, looking like he just got dressed in a darkened room?

I know what you're thinking. Don't judge a book by its cover. But this is the 21st century. Book sleeve design has reached a whole new level of skill and creativity. When was the last time you bought one with a really useless cover that turned out to be brilliant?

Judging people on appearances may not be an exact science but it has served mankind well for the past 200,000 years or so, ever since our ancestors evolved on the plains of Africa. Who are we to say it's wrong now?

Of course, being too pleasing to the eye has its pitfalls.

For a start, it can attract unwanted attention - from members of either sex. Back in my early 20s, I was gelling my hair in the gents at a newspaper where I worked in London when I noticed a well-known silver-haired art critic hovering behind me.

"You look very beautiful," he declared in an aristocratic drawl.

"Er, thanks," I replied awkwardly, and scurried out.

Obviously, not everyone can resemble catwalk models all the time - especially not those like me who were born with looks that could most generously be described as average. What really counts is not what you've got but how you use it.

Take rock god Steven Tyler. The 60 something Aerosmith frontman, who played Singapore last month, has a face that's so lived-in it probably has its own set of tenants. Yet how could anyone care when he puts so much effort into dressing in outlandish get-ups and strutting around like a glorious rock 'n' roll peacock? This is obviously a man for whom vanity is nothing to be scared of.

So why worry about the fact that men who enjoy personal grooming are traditionally considered a bit girly?

We often make the mistake of thinking that to be vain means to be shallow; that the person in question is simply incapable of looking beyond surface appearances. But, like it or not, they do matter. For how we choose to present ourselves to the world speaks volumes about the soul of the person underneath.

Now if you'll excuse me, I've just got to run off and fix my hair.

Joel Cooper will be taking a break.