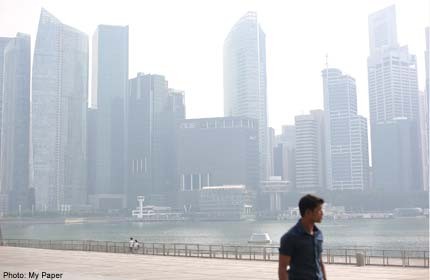 But that's the Great Singapore Sale for you. It's a very stressful time for shoppers and retail outlets.

So let's talk about the haze instead.

There hasn't been such a formidable cloud hanging over Singaporeans since the last MRT breakdown. The haze is inescapable. So here are the telltale signs that those damn forest fires are back.

1) Numbers on the TV screen

Without warning, a number appears in the top corner of the screen.

I wasn't sure if it was Singapore's latest Fifa ranking or the IQ of the actor on screen. As I was watching an appalling Chinese drama at the time, the latter seemed highly unlikely.

One can only wonder what the tourists make of the number on their hotel room TVs. I suspect they believe it's the Singlish spelling of South Korean singer "Psy" and that we're monitoring his latest chart position.

Mind you, if you'd tried a little Gangnam style on Monday night at a void deck, you'd have gone down like a three-legged horse.

2) Farmer is a dirty word

Last week, Indonesian farmers were not part of our national conversation. If considered at all, they were probably thought of in benign terms.

They are immediately struck down with Tourette Syndrome. They can't say the word without swearing. For a week now, it has been "those ******* farmers".

Singaporeans are turning the air blue (which is the last thing we need right now).

If you find yourself getting worked up about neighbouring farmers and the Indonesian forestry industry, stay calm and think of sunny days and blue skies. Oh, wait, we can't... Those ******* farmers.

3) Everyone thinks they're superheroes

I've got nothing against the masks. They are smart and selfless. If sensible folks want to look like a cross between Dr House and Hannibal Lecter, then good luck to them.

But there seems to be a rush to don the masks at the earliest opportunity and play Batman. I imagine a male voice saying: "Mummy, mummy, there is a small grey cloud coming over from Indonesia. Can I put my mask on, please, mummy, please?"

And a female voice replies: "Of course you can, son. But you're a 45-year-old man who really doesn't need my permission...

Okay, this one could just be me. When a national disaster comes along, I become more melodramatic than an old opera.

On Tuesday, I was on the phone all the way to my daughter's school. "Lock down the children," I cried.

"The Gangnam Style Psy index has just hit a 100. My daughter can't have any outdoor play and no outside toilet breaks. If she needs to pee, put some newspaper down in the corner... And make sure the kids all have masks.

"No, don't give them superhero play masks. Give them real masks... Yeah, the Hannibal Lecter ones."

I spent Tuesday night using a hair dryer to blow the air away from my daughter's face. I don't think it made any difference, but she had beautiful layered hair by the time I finished.

This is what happens during haze season. The arguments descend to the level of a kindergarten classroom. If they get any pettier, trousers will be dropped and we'll all start wiggling our backsides at each other.

6) Media photos of the same location

Was the CBD the only place that had the haze? Presumably the rest of the island was savouring cool, cloudless days and singing Lucy In The Sky With Diamonds.

7) We turn into action figures

After several days of unremitting gloom, Singaporeans rose up in revolt. We demanded action against the slash and burn policy. We reached our tipping point. We were furious. We went on Facebook and said: "Someone should do something about this!"

We weren't entirely sure who that someone was, or what the something should be, but we were united in our solidarity. This radical course of action had the plantation workers soiling their underwear.

Those doing the slashing and burning in Indonesia suddenly stopped and said: "Did you hear what's happening on Facebook in Singapore? They're saying we shouldn't do this" ... "Really, how do you know?"... "I read it on my iPhone 5. I bought it with that last subsidy from Singapore, pass the petrol."

In protest, some even destroyed their old Guns N' Roses albums, unaware that the forest fires had nothing to do with lead guitarist Slash.