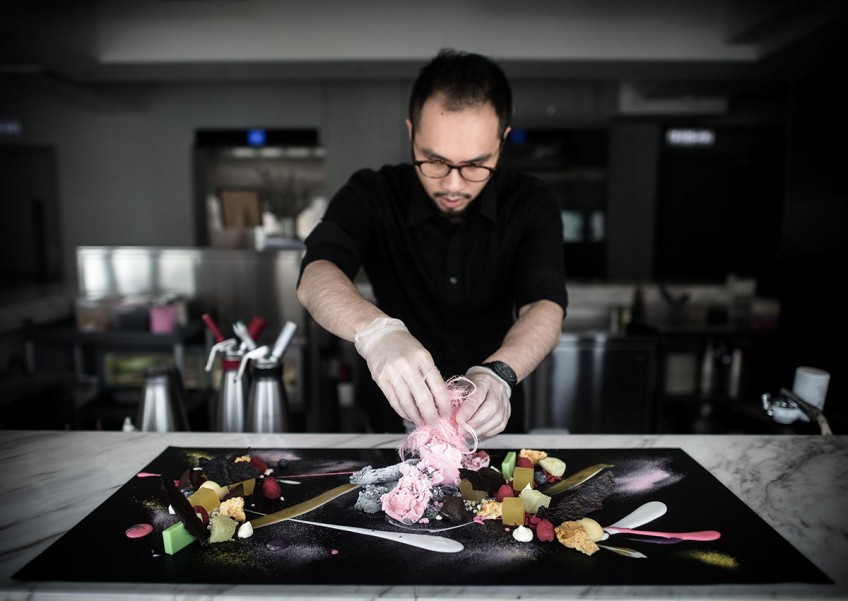 HONG KONG - From Champagne shaved ice to bamboo charcoal-flavoured ice cream, desserts in East Asia are coming into their own as ever-more inventive chefs look to satisfy the region's increasingly adventurous diners.

While Michelin-starred restaurants have long served the foodies of Tokyo, Seoul and Hong Kong, recent years have seen a boom in high-end eateries offering nothing but puddings.

Add the ability to share snaps of dessert delights on social media, and you have a recipe for sugared success.

Small, family-run cafes selling only traditional desserts like black sesame seed soup have been popular in the one-time British colony for decades.

Where in many Western cities, diners might stay in one restaurant all evening, Hong Kong's specialised venues and compact layout encourage customers to move around for their meals, says Kwok.

"It might be a luxury but people are willing to pay a little bit for enjoyment" and to relieve the pressure of living in Hong Kong's hot house environment, says the chef - whose popular bamboo charcoal ice cream with raspberry sorbet and dark chocolate chips sells for a cool HK$130 (S$23.50).

Sitting up at a bar table overlooking the open kitchen, Matthew Ip and girlfriend Sophie have skipped their main course and come straight for ATUM's "Improvisation" dessert for two - HK$348 - to celebrate her birthday.

In front of them, a chef covers the table with a black mat and, after a short conversation about their preferred flavours, decorates the surface with sweets, sauces and sherbert - before pouring unfrozen ice cream into a bowl of misty liquid nitrogen, where it solidifies in seconds.

"We're flexible, we have a dynamic food culture," says marketing-worker Ip, 30, after photographing his meal from various angles and handing his phone to the chef so he and his girlfriend can pose with their pudding.

"You can have dim sum at midnight and ramen in the morning, if you want. In the West I think there's more a fixed perception of what you eat and when.

"Dessert's not normally included in a meal - it might be at the end of a big feast but it's not an everyday thing - so it's not so strange to come out and have only dessert." ATUM is a far cry from Tei Mou Koon, a street-level Hong Kong dessert cafe where bowls of sweet soups and bean curds sell for around HK$20.

With ever increasing rents and a low-margin product, Judy Fung, who took over the business from her father earlier this year, says shops like hers are struggling to survive.

"Over the last 10 years, less and less of these kind of stores exist," she says, though her cafe is doing brisk trade on a weekday afternoon.

"For me, it's not about making money, it's extending the tradition. I have strong feelings about being part of the community - there are people who come here every day."

In South Korea, restaurants are increasingly putting a luxury twist on traditional desert, with a wave of shops offering takes on "bingsu" - a bowl of shaved ice with sweet toppings that first became popular during the 1910-45 Japanese occupation.

While early versions of the dish were served with a cold, red bean paste, shavings are now taken from flavoured milks, while toppings include tropical fruits, green tea ice cream, popcorn and macaroons.

The SeolBing franchise, which offers regularly updated takes on bingsu, opened its first cafe in 2013 and has expanded exponentially to the point where it now has 490 outlets nationwide. This year, it opened its first Chinese venue in Shanghai.

Dishes at the chain costs around 10,000 won (S$12), but at the very top-end of the market a Dom Perignon and strawberry bingsu created by Seoul's JW Marriott hotel sells for 80,000 won.

"South Korean consumers have tremendous interest in high-end desserts and their taste is also becoming increasingly sophisticated," a spokeswoman for the hotel told AFP.

"Our main target was women in their 30s and 40s who have enough income and are willing to invest a certain amount of money and time in themselves." Demand was high enough for the hotel to shift 10 of their most luxurious bingsu every day during the peak summer period.

In Tokyo, diners are also prepared to invest time and money in the dessert of the moment - on a Friday lunchtime some 40 people queued outside Himitsudo, a cafe serving serving the shaved ice dish, known in Japan as "kakigori".

"It's a fluffy kakigori with rich, juicy syrup," says 60-year-old Nobuko Koike as she waits to buy a tub of ice brought down from the mountains around Nikko, 150 km (90 miles) to the north of Tokyo, then flavoured with fresh fruits.

"The shaved ice here is not like the others."