At Just Nyonya in KL, you want to just makan 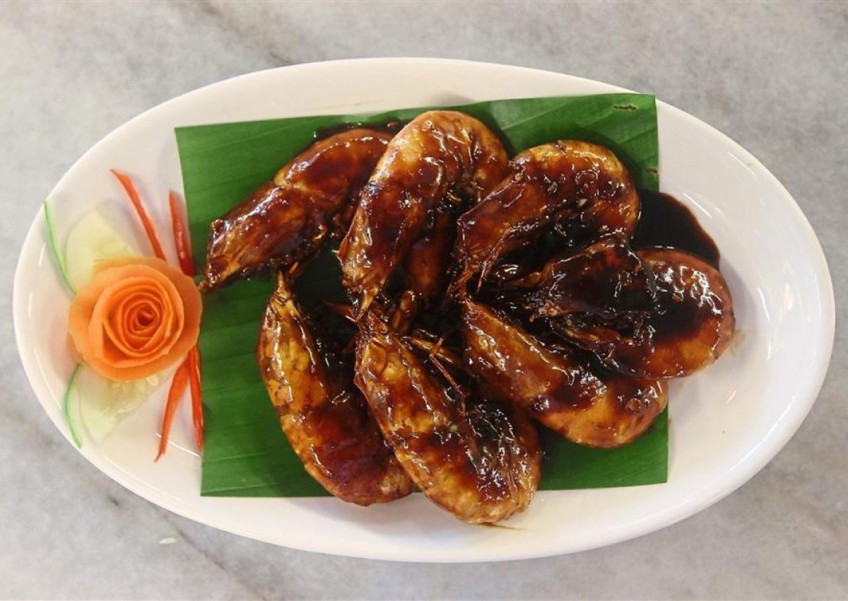 Pickled fish guts do not sound like the most appetising thing. But at Just Nyonya, an honest-to-goodness mom-and-pop restaurant wedged among a row of shophouses in Kepong, the Perut Ikan comes cosseted in a beautiful amber-coloured stew swimming with dark green wisps of herbs and vegetables.

This concoction - a quintessential nonya dish - is made by fermenting fish stomach in salt for a week, before simmering it in a pineapple-spiked stew that's invigorated with a litany of ingredients, primarily daun kaduk, an aromatic indigenous leaf.

The result? A sour, fragrant dish providing plenty of kicks.

Despite its terse name, Just Nyonya serves food that is anything but.

So labour intensive and tedious are preparation methods for this centuries-old cuisine that owner and chef K.S. Tan slogs in the restaurant's kitchen at all hours of the day, preparing the spice pastes and braising or grilling meats.

Armed with the patience of a saint, the 50-year-old is adamant in his refusal to resort to shortcuts. He prepares all his spice pastes from scratch, believing serving curries imbued with pre-packaged chilli pastes will ruin his restaurant's credibility.

The Perut Ikan (above) is a luscious example of this tireless dedication. The banana leaf-swathed Otak-otak (below) - a spicy mousse which combines tenggiri fish meat with a handful of fresh red chillies, kaffir lime and turmeric leaves - is yet another.

Lovingly grilled for two hours over a low fire rather than steamed, the classic dish - which is thoughtfully served with cucumbers in this restaurant - packs plenty of aromatic flavour and leaves a trail of smoke and burn that is perfectly balanced out by the coolness and crispness of the veggies.

Tan's flair for the cuisine is also evident in his Ayam Pongteh (below)- the name given to a sweet and savoury meat dish that's made from a fermented soybean paste.

These tender chunks of chicken and potatoes luxuriating in a rich, inky-brown gravy is so lovely you'd be hard-pressed to believe that a staid Hokkien man from Selangor - rather than a kebaya-clad granny - was cooking it.

But Tan's credentials are just as impressive. Having slogged behind the scenes in a number of Peranakan eateries throughout his 30-year career as a chef, this industrious man has learned the craft from various babas and nonyas who are willing to teach him the secrets behind their family recipes.

He finally realised his dream of running a restaurant early this year, in March, and Just Nyonya arrived at the scene with zero fanfare.

The pared-down menu is made up of the usual suspects, and prices are reasonable, given the amount of effort that goes into each dish.

The restaurant caters mainly to middle-class families in the vicinity who are looking for a no-frills joint to enjoy their meals in relative peace and quiet.

Members of the local Peranakan Association dropped by on several occasions to feast and share culinary tips.

Not all nonya dishes call for a long list of ingredients and convoluted cooking techniques.

Tan's Asam Prawns (see top image), however, shines with the bold, tart flavours of the asam jawa or tamarind, despite its relative simplicity.

His Tempra Brinjal, which also gets its zing from the tamarind, lacks the firepower of previous dishes but is no less delicious, especially when heaped onto a bowl of steaming white rice.

Not everything lives up to the near perfection of the Perut Ikan and Ayam Pongteh though.

A jumble of stir-fried yambean, cabbage, dried cuttlefish and chicken, Tan's Jiu Hu Char is crying out for a certain ingredient.

The ingredient, as it turns out, happens to be mushrooms; without their special brand of earthiness and umami, the dish remains incomplete and wanting - that's how it appears to me, at least, bearing in mind that each Peranakan family have their own idiosyncratic recipes to the dishes.

There's also the Chicken Curry Kapitan, which is a harmonious blend of tangy tamarind, creamy coconut milk and a variety of herbs and spices. Tan says the dish is quite popular among his regulars, but personally, I prefer a drier and more aromatic version.

With most new-generation Peranakans not willing to labour long hours in the kitchen, Tan can be considered among the few cooks still willing to champion one of Southeast Asia's oldest fusion cuisines.

It is with this in mind that you leave Just Nyonya, your growling stomach appeased, and a deep sense of satisfaction prevails.