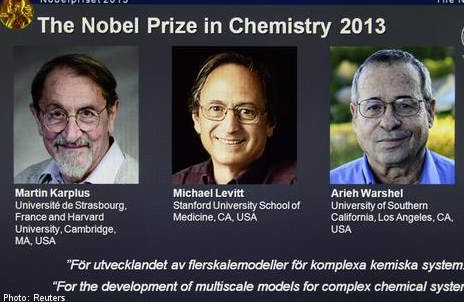 Photos of Martin Karplus, Michael Levitt and Arieh Warshel, the three laureates of the 2013 Nobel Prize for Chemistry, is seen on a screen during the announcement of the winners at the Royal Swedish Academy of Sciences in Stockholm October 9, 2013.

STOCKHOLM - Three molecular chemists won the Nobel Prize for Chemistry on Wednesday for devising computer simulations that are used to understand and predict chemical processes, the jury said.

Martin Karplus, a US-Austrian citizen, Michael Levitt, a US-British citizen, and Arieh Warshel of the US and Israel, were honoured "for the development of multiscale models for complex chemical systems," the jury said.

Their prizewinning work has helped develop computer models mirroring real life, "which have become crucial for most advances made in chemistry today."

As a result, powerful computer programmes can be used to predict complex chemical processes, providing pharmaceutical engineers and manufacturing chemists with a fast-track way to solve problems.

These processes can take place in a fraction of a millisecond, defeating conventional algorithms that try to map them step by step.

The contribution of the three was to combine classical physics with quantum physics in their model.

This hugely boosts the number of permutations for calculation, although it also requires enormous computer power to crunch the data.

"The strength of the methods that Martin Karplus, Michael Levitt and Arieh Warshel have developed is that they are universal," the Nobel panel said.

"They can be used to study all kinds of chemistry; from the molecules of life to industrial chemical processes. Scientists can optimize solar cells, catalysts in motor vehicles or even drugs, to take but a few examples."

The trio will share the prize sum of eight million Swedish kronor ($1.25 million, 925,000 euros), reduced because of the economic crisis last year from the 10 million kronor awarded since 2001.

In line with tradition, the laureates will receive their prize at a formal ceremony in Stockholm on December 10, the anniversary of prize founder Alfred Nobel's death in 1896.

Last year, the honour went to Robert Lefkowitz and Brian Kobilka of the United States for identifying a class of cell receptor, yielding vital insights into how the body works at the molecular level.