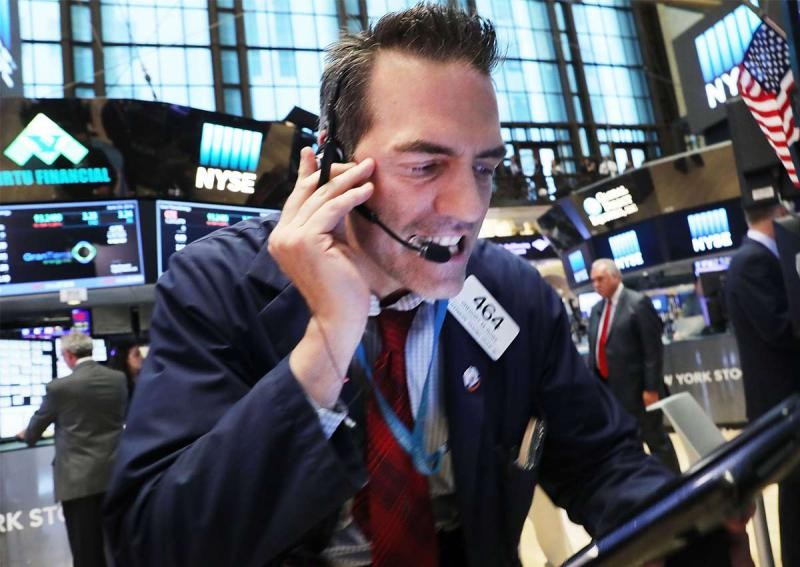 Amid the turmoil, financial experts are advising investors to stay vigilant and keep a cool head.

The key message is: do not panic.

Asian markets crumbled in a massive rout, with investors rushing for the exit after the Leave camp won the Brexit referendum by a margin of 51.9 per cent to 48.1 per cent.

Trading swung wildly early last Friday, with some upbeat moments when it briefly seemed the Remain camp was ahead. But the sell-off began to intensify as the results continued to filter in and cement the largely unexpected outcome.

At the end of the day, regional markets were awash in a sea of red ink, while risk assets such as sterling and crude oil were dumped.

Singapore's benchmark Straits Times Index (STI) closed down 58.46 points or 2.09 per cent at 2,735.39 for its worst single-day loss since the 2.98 per cent slump on Jan 20, when the yuan devaluation sparked a global market crash.

Other markets were belted just as much or even more. In Greater China, the Shanghai Composite Index lost 1.30 per cent and Hong Kong's Hang Seng shed 2.92 per cent.

Tokyo's Nikkei tumbled 7.92 per cent, its worst fall since March 2011, when a tsunami triggered fears of nuclear disaster. Kuala Lumpur went down 0.36 per cent, and Sydney's ASX tanked 3.17 per cent.

Not surprisingly, at the centre of the storm itself, London's FTSE 100 was decimated right from the start, losing more than 5 per cent within the first two hours of trading. US stocks plunged at the open, with the Dow Jones Industrial Average falling more than 500 points.

Experts say this is no time for investors to act recklessly.

Maybank Singapore's head of FX research Saktiandi Supaat said: "The impact of Brexit on growth per se is limited for now, but how Brexit will pan out may take some time (to know). There is no need to panic, as we do not expect any market meltdown now."

OCBC Bank's vice-president and senior investment strategist Vasu Menon said: "At this point, especially over the next few days, investors should not panic. Brexit is not going to be as catastrophic as the global crisis that followed the Lehman (Brothers) collapse in 2008.

"Once the dust settles, markets should regain their footing and we could see a rebound, as global policy makers and central bankers may act to stem the fallout from Brexit. Also, the low interest rate environment and the abundance of liquidity on the sidelines should help markets to rebound once there is greater clarity on how Britain will exit the EU."

The Sunday Times looks at the impact of Brexit on investments, currencies and British property.

UOB said Brexit is likely to create a protracted period of uncertainty in financial markets, and will likely have negative implications on growth prospects for Britain and potentially elsewhere.

"Price gains in stocks around the world from mid-February were unsustainable, given a slowing world economy, falling corporate earnings and a deep malaise in global monetary policy... Brexit will add a new - and very threatening - dimension," Mr Lim said.

Meanwhile, investors piled into safe haven assets, with the price of gold rising more than 4 per cent to a new 12-month high at above US$1,310, a contrast to the over 4 per cent slide in crude oil futures Brent to below US$49.

"Gold is going to be looked at as a preferred safe haven. As the unexpected has happened, the entire notion of whether the US Federal Reserve will raise rates comes into question again," said OCBC economist Barnabas Gan.

"As for oil, as a growth-related asset, it will suffer under the notion that, because the British economy is clearly going to suffer, the EU will also be affected. And with Europe commanding 20 per cent of global oil demand, the conditions that have supported oil at around US$50 are also becoming questionable."

A UOB spokesman said that given the bank's concerns about Brexit, it has downgraded its recommended equity allocation to underweight and raised its fixed income allocation to overweight.

UOB remains underweight on commodities, with a preference for gold. It is also overweight on cash.

"We expect gold, government bonds and the US dollar to benefit from this risk aversion. We will look for evidence that market conditions are stabilising and the global growth outlook improves before raising our risk positioning in our tactical asset allocation," said UOB.

Mr Menon said that because Singapore is a small and open economy with significant links to the rest of the world, uncertainties caused by Brexit may cast a pall on the local bourse, at least in the short term.

Last Friday, sterling was abandoned as global fears mounted over Britain's economic future, and the currency crashed around 7 per cent to 1.388 against the US dollar in the evening. At around noon, the pound plunged to a 31-year low of 1.3224 from a high of 1.5018.

Currency experts agree sterling will continue to bear the brunt of the effects of Brexit and could weaken further.

Mr Supaat said: "It is likely for the pound to overshoot to around 1.30-1.35 against the US dollar in the coming weeks as the impact on the British economy and terms of trade hits. The pound could be weak in the medium term and we think a further decline in sterling towards US$1.30 is possible."

In the long term, Brexit should affect the pound's fair value due to the pessimistic growth outlook, although there seems to be long-term support at the US$1.30 level, he added. He expects to see the pound at 1.30 against the US dollar at the end of this year.

OCBC sees headwinds and uncertainties ahead for Britain which could weigh on the pound.

Aside from the risk of the British economy slipping into a recession, factors that could weigh on the pound include Britain's large external deficit which stands at 4 per cent of gross domestic product, the risk of credit rating downgrades which could result in Britain losing its triple-A status, and the risk of Scotland seeking a second referendum to exit Britain, as the Scots had voted to remain in the EU.

The political uncertainty following Prime Minister David Cameron's move to step down by October and the potential for a protracted and difficult separation negotiation with the EU are other factors that could cast a pall on the pound, said Mr Menon.

The euro is also not being spared.

As Brexit raises the question about potential referendums by other EU members, the euro will likely be affected by risk-off sentiments as well. Meanwhile, safe-haven currencies like the US dollar, Swiss franc and Japanese yen will likely benefit, buoyed by the general flight to safety.

Asian currencies could also weaken against the US dollar in the short term because the greater global risk aversion which comes with Brexit should boost the greenback and weigh on Asian currencies seen as riskier trades.

However, Mr Menon said there is a silver lining to the weak pound for Singaporeans. For one thing, it will make Britain a more attractive holiday destination.

And for those with children studying in Britain, their Singapore dollars can now go further in meeting education and living expenses. Those planning to send their children overseas for their tertiary education may also find Britain to be a more attractive choice if Brexit continues to weigh on the pound.

Sales volumes of property in Britain could rise, with a weaker sterling drawing global investors. This is because medium- to longer-term prospects for the market remain sound, Mr Alistair Elliott, Knight Frank senior partner and group chairman, told The Sunday Times last Friday.

But pricing, which has been steady, may not move by much.

Britain has long been a destination for Asian real estate investors from China, Hong Kong, Singapore, Malaysia and Thailand.

Mr Nicholas Holt, Knight Frank's head of research for Asia-Pacific, said that for existing Asian property owners, the fall in the pound's value will affect the repatriation of any income returns, as well as the gains on any disposal.

"Although there is likely to be more volatility in the market, ultimately most investors are looking to the long term - so will continue to hold their assets, in the hope that any short-term instability will eventually subside when more clarity on the UK's role in Europe is determined," said Mr Holt.

In the lead-up to Thursday's Brexit referendum, the market had largely taken a "wait-and-see" approach.

Over the past year, the number of active buyers to available properties had halved, a Knight Frank report noted.

In the meantime, price growth slowed to 0.1 per cent last month, the lowest rate since October 2009. Prices have grown just 2.4 per cent over the past two years.

That said, there will be some uncertainty as Britain's economy adjusts to being outside of the EU, Mr Elliott added. "People would be more cautious to start with."

"The interconnected trading relationship between London and the rest of Europe means the implications are more complex."

And while the focus leading up to the referendum had been on Britain's international trading relationships, domestic politics could now be a key risk to the housing market, he noted.

Still, Brexit does not change the economic fundamentals in Britain, which posted an average annual GDP growth of about 2 per cent in the five years to the first quarter of this year.

And as the fifth-largest economy in the world, it is in a strong position when negotiating trade deals with countries in the EU and elsewhere, noted Mr Richard Levene, Colliers International's director of international properties.

There also continues to be a significant lack of supply in the housing market, which will benefit property investors.

Now that British voters have decided to leave the EU, other European nations may demand to break away as well. This puts the entire EU at risk of breaking up. In the coming months, elections in Spain, France, Germany and elsewhere in Europe will provide more clues about the potential contagion from Brexit.

Mr Menon said: "Brexit on its own may not pose a global systemic risk, but it could fan political flames in the rest of Europe, and eventually cause fears of a break-up of the EU. This is probably not something imminent, but a risk to bear in mind now that Britain has decided to leave the region and chart its own course."

This article was first published on June 26, 2016.
Get a copy of The Straits Times or go to straitstimes.com for more stories.