Keeping up with Gordon Ramsay 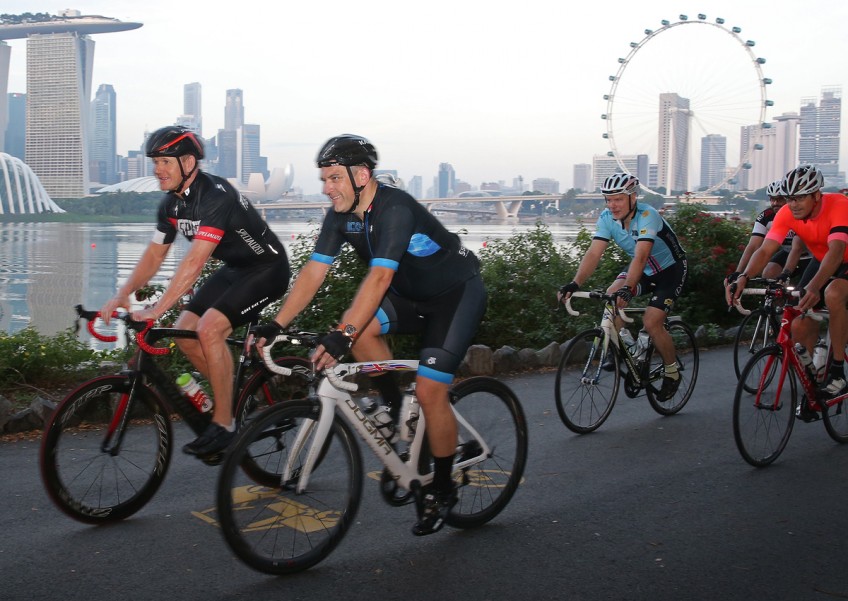 The celebrity chef hardly breaks a sweat as he cycles from Marina Bay Sands to Changi Airport and back in an hour.

Most of us think we are masters of multi-tasking when we are using a word processor and have two chat windows open at the same time.

For restaurateur and Michelin- star chef Gordon Ramsay, multitasking is cycling along East Coast Parkway while networking with big shots from the corporate world.

The 49-year-old - who has been a regular on the triathlon circuit for four years and is the host of several television reality shows (even his achievements are multi-faceted) - was in Singapore last week for a routine work visit to his Bread Street Kitchen restaurant at Marina Bay Sands (MBS).

As always, the British celebrity chef was thinking of his next Iron Man race, so he decided to combine training with a meet-and-greet session - on two wheels.

So, on a cool and dark morning last Tuesday, we gathered at 6am on the broad avenue outside Bread Street Kitchen. Twenty cycling enthusiasts, all fit and eager. And me.

Ramsay shows up, looking trim in a black outfit, and says a few words of thanks and encouragement, as does Mr Ben Elms, Asia-Pacific president of Vodafone and leader of the ride.

About an hour later, we are done. We have cycled from MBS to Changi Airport and back. Ramsay and the rest look as if the ride has them pepped up for something more strenuous. I feel ready for the defibrillator.

The team moved at an average speed of 35km an hour, but my legs and lungs were not having any of that and opted for a more casual 25km an hour.

A British cyclist named Craig swooped in. Like an angel, with one hand on his handlebar and the other on my back, he pushed me till the gap between the pack and me closed. Thanks, Craig. If not for you, I would still be out there, a pale-faced rider looking for his group.

Adding to the number are representatives from Specialized, the brand sponsoring Ramsay's bicycle for the day, as well as MBS employees.

Bread Street Kitchen has laid out a buffet of breads, pastries, juices, eggs, sausages and salmon, done different ways. I have the Eggs Benedict twice for recovery purposes. Someone suggests the purplish-red beetroot juice.

At our interview, Ramsay apologises for the pace after I mention my near-death experience. I accept the apology. Seasoned cyclists will snort, noting that 35km an hour is considered a breeze on Singapore's flat roads, but it is not every day that the man who has reduced many people to tears on television tenders a heartfelt contrition, so I accept it.

That done, he talks about Ms Choo Ling Er, 27, a triathlete cycling beside him, and her inspirational story of how after she was hit by a car while cycling and broke both legs, she pushed herself through recovery till she was fit enough to compete again.

"So we upped the pace a little bit, did a little training," he says. He flashes the patented Ramsay look, that one he gives when he pulls aside a trainee cook on the verge of a melt-down for The Talk.

"Listen, no hills. The only hills are the speed bumps," he says.

A sense of shame washes over me. I have a pair of never-before-broken legs and make a silent vow to buck up.

When Ramsay is training in earnest, he pumps along at 40km an hour.

He clears his head by cycling around the hills at his home in Los Angeles for two hours or longer.

In addition, swimming and running are activities the father of four does with his children.

His wife, Tana, 41, has also begun competing in triathlons since last year, he says.

He does not take part in races to win, but to complete them - it is the passion for whatever activity one chooses that creates success, rather than the desire to win, he says.

It is hard to believe that he had just arrived from London the previous day - not without popping in for a meal at his Plane Food outlet at Heathrow Airport, as shown on his Instagram page, to his 1.2 million followers.

The frequent flyer, who has 30 restaurants in Britain, the United States and the Middle East, deals with jetlag the Ramsay way - he annihilates it with iron discipline. He takes a power nap mid-flight, asking the cabin crew to wake him after 90 minutes no matter what, even if "they have to throw water on me", he says.

A quick dip in the hotel pool on arrival erases residual tiredness and he is then ready for anything that Singapore, Dubai or any destination may throw at him.

During the morning session, he tells me he chatted with cyclists about his work with the Gordon and Tana Ramsay Foundation, which raises money for Great Ormond Street Hospital.

He also talked about maintaining standards in his restaurant empire. This he accomplishes with "mystery shoppers", existing customers who drop in unannounced and a research team who gathers feedback.

"We have as much to learn from a bad experience as we have from the good. We have a daily report. That kind of control keeps staff on their toes and, if we have an issue, we can deal with it within an hour," he says, snapping his fingers for emphasis.

"It's just a really nice way of meeting new people. Everyone was just out for cycling and we happened to be talking a little about work. And everybody looks great in Lycra," he says.

The fingers snap again when we talk about the Singaporean diners who have been filling Bread Street Kitchen to capacity since it opened last year.

"Singaporeans are demanding." Snap. "They want service, quick." Snap, snap. He seems to be talking about the backlash following the opening, about the crowding and how hard it was to get a table.

"They have sophisticated palates and get upset easily if their standards aren't met... Getting things correct is crucial. The problem was, when we opened, we opened to the scrutiny of the media.

"That can go both ways, that can destroy you or you can get off to a good start. We kept the numbers low, to get consistent quality," he says.

"The problem here was the demand and it's a happy problem."

Shortly after that, he rushes off.

He will be leaving for Dubai in a few hours to take care of business at his restaurants and, after that, he will travel to Los Angeles to judge more episodes of the cooking show, MasterChef.

It has been invigorating being in the presence of the high-energy Ramsay and I am inspired to train harder. But for now, it is a long rest for me and to discover in a few hours, when I go to the toilet, the alarming after-effects of drinking beetroot juice.