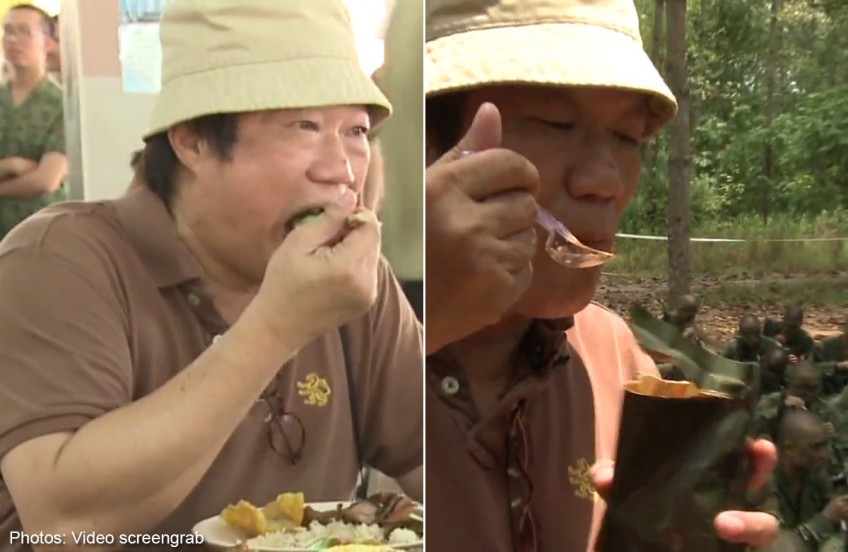 SINGAPORE - It's official, our boys doing National Service in Pulau Tekong "get it good" when it comes to meal time.

Prominent Singapore food critic and authority on local food - Makansutra founder KF Seetoh - has said that the food at the cookhouse in Pulau Tekong's Basic Military Training Centre (BMTC) is of a quality that is "way higher than it should be".

In a video - Military Makan - put online by Cyberpioneer yesterday (April 30) on its Facebook page, Seetoh was seen visiting BMTC and eating in the cookhouse.

How did he rate the food? He had praises for the chilli that "rocks" and fried wanton that was "good". And he also said that it's comforting to know that soldiers can come back to a "hearty meal" after training.

Seetoh also joined some of our boys in green while they were eating combat ration. His verdict? The food is probably "not too bad" as he saw some servicemen "actually smiled".

It is not known when Seetoh visited BMTC.

It's really not surprising that Seetoh will find the food good, especially when compared to the food that the army served decades ago.

Seetoh, when asked about his personal experience, shared his memories of "fried rubber bands" (otherwise known as fried beehoon) and "tasteless eggs" that many older men here who have served in the army will remember "fondly".