Kindness in the wake of Brexit 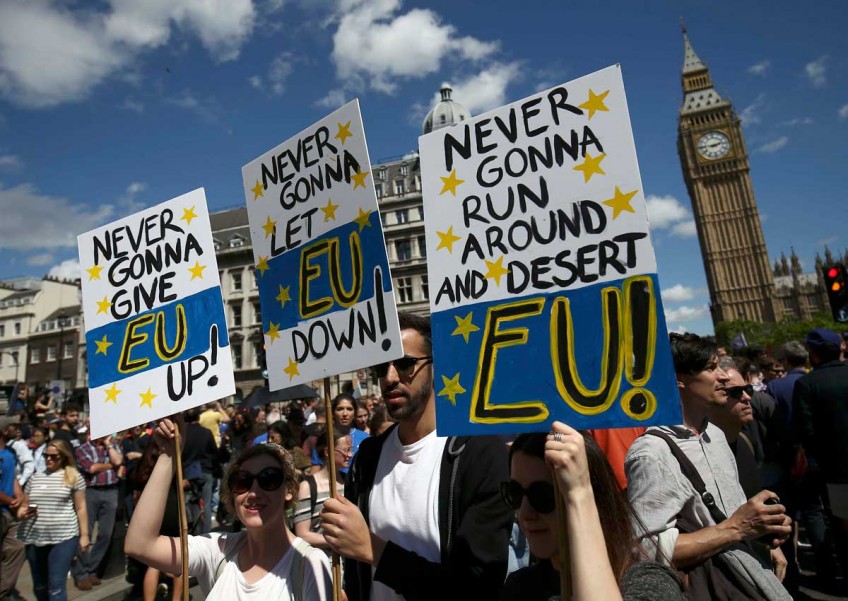 People hold banners during a 'March for Europe' demonstration against Britain's decision to leave the European Union, in central London, Britain July 2, 2016.
Reuters

In the last fortnight, Britain's referendum vote to leave the European Union had the world reeling in disbelief. Brexit stirred up a slew of economic and political analyses, while social media went into a frenzy. British voters, clearly shaken by the outcome, have resorted to a spectrum of coping mechanisms. Some celebrated, many regretted, while others pondered the uncertain future with much pessimism.

As it is, everyone is trying to make sense of Brexit. But one thing is clear to me: the outcome of the referendum and its still-unfolding aftermath is telling of how kindness is needed to rein in its ugly repercussions.

Not long after the result was announced, a slew of xenophobic and racist remarks and incidents surfaced in Britain. A Facebook user, Sarah Childs, compiled an album of tweets and posts showing this emerging nastiness. Immigrants, particularly of Polish, Romanian and Pakistani descent, were being viciously taunted with calls, online and in-person, to pack up and leave Britain.

To be sure, not all who voted for Brexit did so because of their resentment towards immigrants. Many have said they were simply registering their heretofore unheard protests and concerns, and some expressed both surprise and regret that their vote actually mattered.

As always, extreme right-wing views are confined to a minority. But this minority is growing perilously, especially now that they feel emboldened by the referendum result, which they interpret as legitimising discrimination against non-whites or even white non-natives. More than just a simple disassociation from the EU, Brexit has become a mandate of sorts among the narrow-minded to commit hateful, racist acts. This is most definitely unkind, and even that is an understatement.

Although racism is never excusable, it is important to recognise that some of its hateful expressions were uttered or displayed in the heat of the moment, driven by the euphoria of "winning". Many of these people are now quickly backtracking and regretting their remarks and actions. While not condoning any rationalisation of racism and xenophobia, it is instructive to understand possible root causes of these outbursts.

If I may attribute its fundamental cause in one word, it's disenfranchisement.

Brexit is a sobering, real-life example of the pitfalls of cold macro-economic policies not trickling down to the average citizen, perhaps even making him worse off in reality and/or perceptually.

With economic growth spurred by unrestricted movement of labour and goods across borders, globalisation would appear to be the way forward. Left unchecked though, it has been shown to widen the income gap and negatively affect the standard of living of the average citizen. Wealth is largely concentrated in the pockets of the moneyed elite and educated professionals, particularly those in the banking and financial industries.

On the flip side, the lower- income group, consisting of blue-collar and service workers, artisans and tradesmen, face stiff competition from immigrants. Foreigners are willing to work for reduced wages, which are still a small fortune compared to what they might otherwise earn in their countries of origin. As such, immigrants are unfortunately perceived as "job stealers" who pose a severe strain on the United Kingdom's infrastructure, healthcare and housing. Brexit is thus an amalgamation of economic and demographic woes, felt most harshly by the average British taxpayer.

While British Prime Minister David Cameron and his fellow Remain campaigners incessantly proclaimed the macroeconomic benefits of globalisation, they had clearly underestimated the frustration and anger of those increasingly disenfranchised by it. Perhaps they never even heard the unhappiness in the echo chamber of the "progressive" globalisation advisers these politicians listened to.

Back home, Singapore has much to learn from Brexit. Like Britain, Singapore is part of a multinational organisation, ASEAN. While ASEAN is nowhere near being the common market that the EU is, the allure of working in a more developed city-state has attracted many foreigners from ASEAN and other countries to settle here.

The influx of foreign talent and transient workers, coupled with the release of the Population White Paper in 2013, has led to our own fair share of xenophobic comments and incidents. Our Government has manfully done its best to respond to these naysayers by clarifying and explaining.

There was a real possibility that objectors, perhaps goaded by extremists, would refuse to accept any explanation and choose to retreat into their echo chamber, where they feed off each other's resentment and fear.

Thankfully, the Government did not just explain but also demonstrated that it listened by tweaking some policies. More importantly, our civil society and ground-up movements have not just spoken out against xenophobia; many have organised events to encourage greater integration and understanding of our non-Singaporean counterparts.

We need to be mindful that it takes very little, whether an isolated incident, a misguided statement or even a well-meaning but ill-advised policy, to spur xenophobes and racists to act on their skewed beliefs. The rest of us, whether we are thought leaders or average citizens, must be careful not to say or do anything to disrupt Singapore's fragile multicultural harmony. As Brexit has shown, harmony can morph overnight into extremism and chaos.

Our tiny nation needs to continue punching above its weight to remain competitive in an inexorably globalised economy and socio-political milieu. But knowing now that marginalised groups are likely to suffer from globalisation, an equal focus has to be placed on mitigating its effects to ensure no one is left behind.

The onus is on us as individuals to be kind to one another, regardless of economic background or country of origin. As British statesman Winston Churchill said: "If the human race wishes to have a prolonged and indefinite period of material prosperity, they have only got to behave in a peaceful and helpful way towards one another."