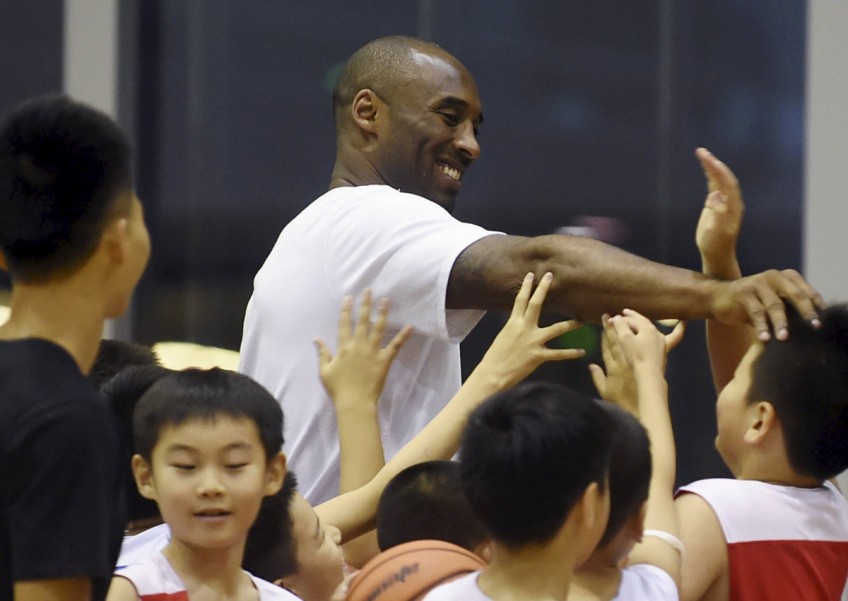 For his last stop on a three-city Asian tour that also took him to China's Guangzhou and Shanghai, Bryant arrived in Taipei yesterday afternoon during which he participated in a series of events on a tight schedule.

The visit marked the fourth time the NBA veteran has visited Taiwan. He previously visited the island in 2006, 2007 and 2009.

Commenting on his latest trip, Bryant said "it has been too long" since his last visit was six years ago. "It is amazing here," he noted.

The NBA All-Star said that Taiwanese players are getting better and better since his first trip to Taipei nearly a decade ago. "They feel much comfortable with the balls now."

The Lakers shooting guard began yesterday's schedule by joining a ribbon-cutting ceremony to officially open a Nike flagship store in Tapei's Jiantan area before heading to a basketball court in Jingmei to donate jerseys to a elementary school basketball team.

Most of the team members of Nantou-based Nan Gwang Elementary School are underprivileged students who could not afford to buy jerseys even though the team advanced to the playoff of a national tournament last year.

To help these young hoop players, he donated jerseys and shoes to the team members during a ceremony.

Bryant's last stop in Taipei was working with young basketball players at the National Taiwan University (NTU) Sports Center, where he met with fans and player representatives at a summer basketball camp.

A total of 30 young hoop players, selected among 10,000 applicants nationwide, joined the training camp personally presided over by the NBA star, who emphasised the importance of footwork and balance to the rising athletes.

The End is Near

Before ending his Taipei trip, Bryant expressed his appreciation over Taiwanese fans' passion for welcoming him with open arms.

The 36-year-old veteran said he knows the end of his NBA career is near but he will do his best to make his last performances "epic."

"Thank you so much for your love and support."

"I love Taiwan," he said in Mandarin.

One of the best shooting guards in NBA history, Bryant entered the league directly from high school, and has played for the Lakers his entire career, winning five NBA championships.