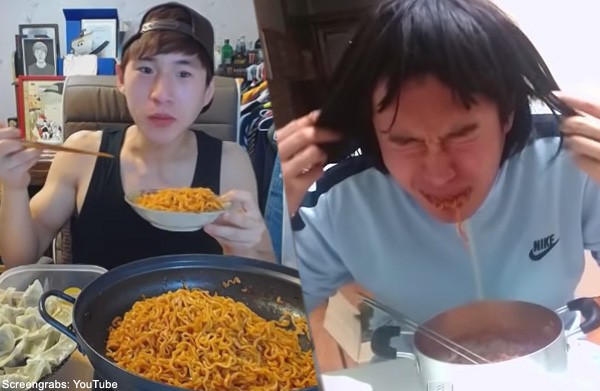 Love spicy food and Korean instant noodles? Here's a challenge for you.

A recent food fad has taken the country obsessed with spicy food by storm, according to Korean pop culture websites Koream and Allkpop.

The challenge involves a packet of red hot "Fire noodles" and eating it as quickly as humanly possible.

The noodle, also known as "Flaming Chicken Fried Noodle", supposedly gets even spicier while you are chewing it, and the heat on the tongue doesn't go away, according to reviews.

But it's not just Koreans who have jumped on the noodle-eating bandwagon. People in the US and the UK have also attempted the crazy tongue-burning challenge, some to hilarious effect.

Here are some brave souls who took the challenge, with a few going so far as to add their own crazy twists.

These guys do a 'Fire Noodle' race, but barely make the finishing line (at least for one of them)

This guy eats five packets of 'Fire Noodles' - and survives