Korean with a twist 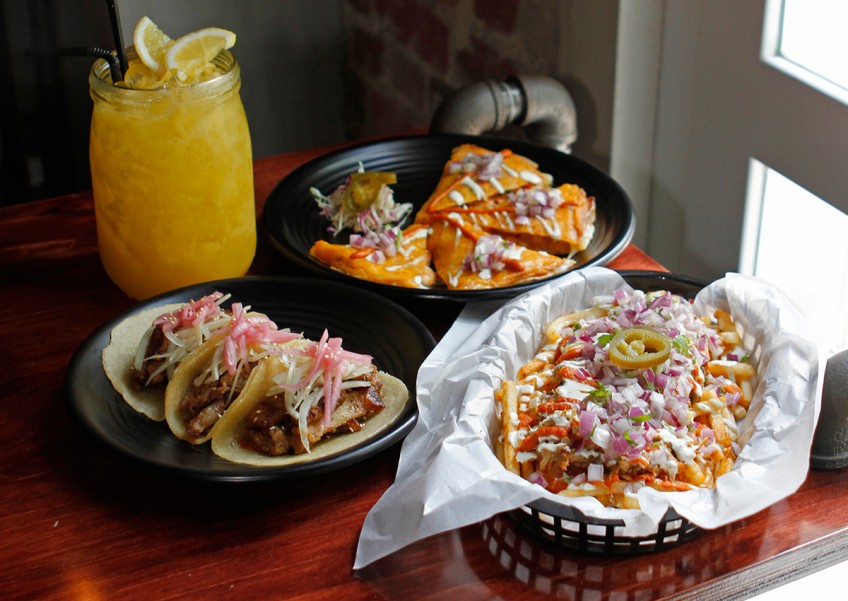 The Korean food wave is showing no signs of slowing down.

Classic Korean dishes, such as kimchi and bulgogi (grilled Korean beef), and sauces such as gochujang (chilli paste) and ssamjang (fermented bean paste) are finding their way into Mexican and Spanish dishes.

Most of these businesses serve Korean-Mexican food and are inspired by the massive success of Korean-American chefs such as Roy Choi, who started the Kogi BBQ taco truck in Los Angeles in 2008.

It sparked snaking queues for offerings such as kimchi quesadillas and tofu tacos.

Soon, other food trucks serving Korean-Mexican food started plying their trade across the United States and in cities such as Sydney and London.

While chef Choi is credited with pushing Korean-Mexican food into mainstream prominence, Mr Sid Kim, 46, co-owner and founder of Vatos Urban Tacos ("vatos" means dudes in Spanish), says that Korean- Mexican food has been around for the past 50 years.

It came about as a sort of cultural overlap in Koreatown, a district in Central Los Angeles, where Korean-Americans and Hispanics live side by side.

Mr Kim says that he grew up on Mexican and Korean food.

"When I came home from school, the quickest way of eating leftover bulgogi or galbi (grilled short ribs) was to wrap them in a tortilla wrap instead of having to cook rice and other side dishes."

Four years after opening Vatos Urban Tacos in Seoul, he decided to take the brand overseas.

The cosmopolitan pool of diners in Singapore, which includes Korean and American expatriates, was key in his decision to partner lifestyle group Massive Collective and open here. He says: "Besides being familiar with the Korean and Tex-Mex cuisines that are readily available here, diners are receptive to new trends."

He adds that Korean ingredients are typically fermented and pickled and add "a deep umami flavour" that offsets the heaviness of meats.

Mr Luke Yi, 40, owner of Don't Tell Mama, says he was looking for a way to stand out from at least nine Korean restaurants in Tanjong Pagar when he took over the space next to his Chicken Up eatery, which serves Korean fried chicken.

"Kimchi is the Korean equivalent of chilli padi, it is a universally flexible ingredient; we pan-fry the kimchi before adding it to fries and quesadillas," he says. "It makes the kimchi less sour and gets it caramelised."

For Mr Julius Chen, 26, owner of Ssam Korean Mexican Kitchen in Marina Bay Financial Centre, the heady flavours of kimchi salsa, salsa verde and onion-lime relish make for a "powerfully flavoured lunch option that stands out from the tepid sandwiches and salads in the Central Business District".

He says: "Korean food is typically sweet, spicy and savoury but it lacks acidity, which is complemented by the salsas used in Mexican food."

It helps that the kimchi, which is imported from South Korea, lends "a light crunchiness to the heavy meats-and-beans Mexican food combination".

Besides Mexican food, Sync Korean Tapas Bar in Serangoon Garden is incorporating Korean elements in Western dishes such as cooking kimchi with aborio rice, seafood and vegetables in its paella dishes. It also uses mozzarella and cheddar cheeses, and chicken sausages in topokki (Korean rice cakes).

Co-owner Lisa Tan, 42, was inspired by the Korean-Western cafes serving kimchi and pickled cucumber with steak and pasta that she visited during her holidays in Seoul.

She says: "Up to 60 per cent of our customers are in their 20s. They are quite Westernised, are drawn to the K-pop culture and are more open to try these fusion dishes."

Most diners whom The Sunday Times spoke to have not heard about Korean-Mexican cuisine, but are game to try it.

Investment manager Andrew Loh, 31, who has dined at Vatos Urban Tacos, says: "The food is more Mexican than Korean, as the sourness and spiciness of the Korean ingredients do not come through, but it is an interesting way of discovering more about Mexican cuisine."

Finance analyst Janice Atienza, 36, says: "I was curious about this combination. The rice bowls are like bibimbap with Mexican ingredients and the variety of flavours works for me."

Seoul-based chef Jay Noh, 30, who has dined at Don't Tell Mama, says: "Salsa reminds me of kimchi; it has the same strong dose of spiciness and injects some fun when eating tacos."

Where to go for Korean fusion food

This takeaway place serves burritos, rice bowls and salads. Add meat and toppings to one of these three options. Popular picks include the beef short ribs ($9) which are seasoned in a Korean barbecue marinade for 40 hours, and pork belly and shoulder ($8), marinated in kimchi and served with crackling. Toppings include kimchi salsa and salsa verde.

Where: 12 Maju Avenue
Open: 11am to 11pm daily
Info: Go to www.facebook.com/syncbistro

For breakfast, choose from signature dishes such as Kimchi Panini ($12) and skewered grilled corn ($12) which is sprinkled with Korean chilli powder and parmesan cheese. At night, order finger food such as Bulgogi Fries ($18); Kimchi Chicken Quesadilla ($14), which is loaded with mozzarella cheese, guacamole and sour cream; and Bulgogi Salad ($16). Drinks include Beergarita ($22), a frozen cocktail topped with an inverted bottle of beer.

About 30 to 40 per cent of the menu are Korean-Mexican dishes. Popular ones include Kimchi Carnitas Fries ($16), where French fries are topped with braised pork carnitas, sauteed kimchi, melted cheese and sour cream; kimchi pork quesadilla ($18) and Korean pork belly taco (from $10), which has the meat marinated in a mixture of gochujang and doenjang, and ssamjang aioli.

It also serves Makgeolitas ($25) a concoction of tequila and makgeolli (Korean rice alcohol).

This article was first published on January 31, 2016.
Get a copy of The Straits Times or go to straitstimes.com for more stories.