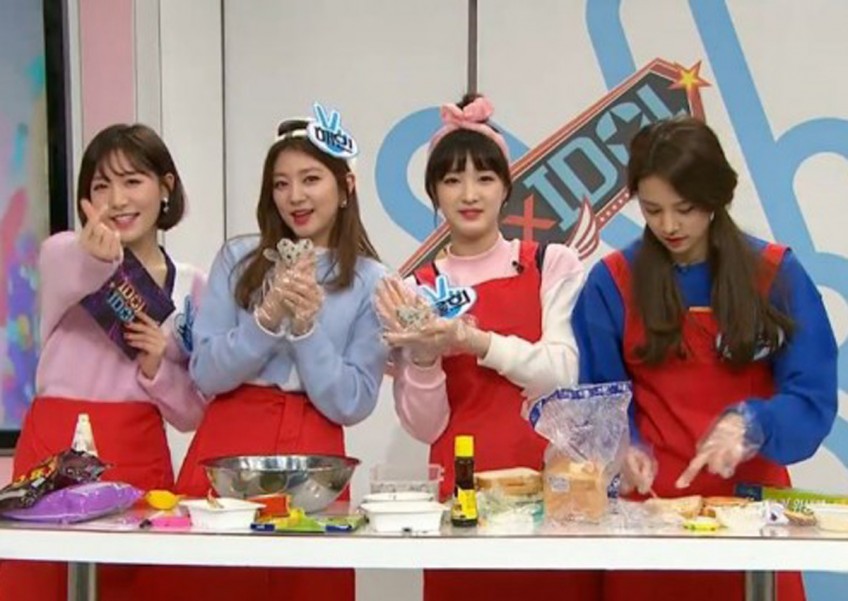 Girl group Laboum went live on V app once again, this time with a cooking show. Soyeon was the host, conducting the events smoothly. Throughout the programme, the members cooked a nice meal for a lunchbox or a picnic.

To begin with, they divided themselves into two teams of three to create different recipes. One was the older team with Yujeong, ZN, and Soyeon while the other team had Solbin, Yulhee and Haein. The first team decided to make Inari Sushi and sandwiches, while the latter chose Korean rice balls and sandwiches.

When Soyeon asked the members what their favourite late-night snacks are, they yelled in unison "Fried Chicken and tteokbokki (spicy rice cakes)!" They were also caught eating continuously while cooking, making the audience burst into laughter.

While talking about whom to give the snacks to, Soyeon interviewed some of the members on which gifts they remember the most. Solbin said, "When we first debuted, our fans prepared lunchboxes for everyone. I don't think we can ever forget that." ZN added, "A fan gave me packets of liquid red ginseng as a present. I'm planning to drink every drop of it!"

In the end, they finished cooking and decided to give it to their hard-working managers and staff. They promised their fans that they would upload photos on their Facebook or Twitter after sharing the snacks. Laboum finished off the show, commenting that the cooking was very meaningful.

In the beginning of the video, he showed off his Chinese skills by greeting his fans in both Korean and Chinese. Later on, he surprised everyone by revealing his hidden long hair that was tied up in a bun. He commented that he had been wearing wigs to look as if he had shorter hair.

Five members of the rookie boy group Seventeen showed up on a short V app broadcast. The members were backstage at the "Infinite Challenge Expo" at KINTEX in Goyang, Gyeonggi Province.

Dino, who turned into a reporter just for the broadcast, introduced the members one by one. They sent their regards and announced that they are preparing for an upcoming encore concert.

They also added that it had been quite a long time since their last broadcast on V app, commenting that they would share a lot about what had been going on.

Naver's real-time broadcasting app V allows fans to interact with their favourite K-pop stars through live broadcasts. The app is available for Android and iOS. For more information, visit www.vlive.tv.