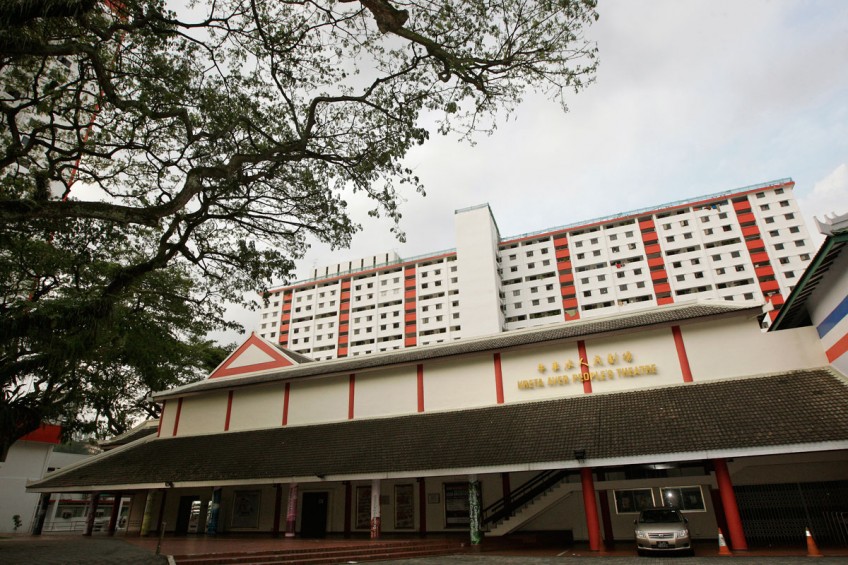 The exterior of Kreta Ayer Peoples' Theatre located at 30A Kreta Ayer Road next to Kreta Ayer Community Centre.
The Straits Times

Tucked away on Banda Hill, the Kreta Ayer People's Theatre which is a Chinese opera performing arts centre in Chinatown, has turned 45.

To mark the occasion, the 1,048-seat modern theatre, which was upgraded earlier this year at a cost of nearly $1.5 million, is staging five nightly Cantonese opera performances by top Hong Kong opera stars, starting from Wednesday till Sunday.

The theatre is the brainchild of late deputy prime minister Goh Keng Swee, who had it built originally "to provide a convenient and permanent venue for elderly residents in Kreta Ayer to enjoy their favourite Cantonese opera".

Dr Goh, who died five years ago at age 92, had said his greatest satisfaction in his 25 years as MP for the former Kreta Ayer constituency, between 1959 and 1984, was the birth of the theatre there.

Many of the top Chinese opera stars from China, Hong Kong and Taiwan, including the queen of Cantonese opera Hong Xiannu and Teochew opera idol Tan Chor Hwee, have performed in the theatre, which started out as an open-air stage with no roof, walls and permanent seats, before it evolved into its present building next to the Kreta Ayer Community Club in 1979.

Queen Elizabeth II, her husband, Duke of Edinburgh Prince Philip, and Princess Anne visited the theatre and enjoyed an opera show there in 1972.

Today, the theatre is a popular venue for Chinese opera performances, with a history worth preserving as a national monument, said the theatre's honorary secretary, Ms Alice Ho.

Only last week, the Fujian Provincial Experimental Min Opera Theatre from China, a Taiwanese troupe, and other local groups performed there in conjunction with a two-day international seminar on Chinese opera organised by the Traditional Arts Centre here.

Ms Ho said the theatre's upcoming performances by the Hong Kong troupe is the theatre's third major show this year to mark its anniversary. The first in June was the Cantonese musical, Fung Bo Bo Memories And Chinatown, which starred the former Hong Kong child star. The second in July was three action-packed performances by the famous Zhejiang Wu Opera Troupe from China.

A book charting the rich history of the theatre will be published soon to mark the theatre's anniversary, added Ms Ho.

Tickets for Canto Op Troupe's performances, which come with English subtitles, are available from www.kapt.com.sg or from the theatre's box office daily between noon and 5pm. For more information call 6222-3972 or 9146-1528.