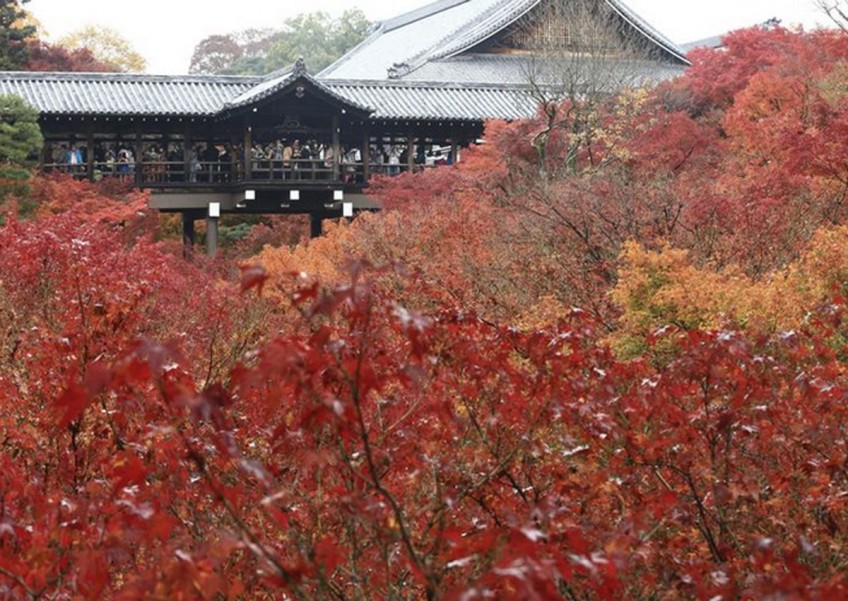 KYOTO - Though Kyoto has many scenic spots to enjoy tinted autumn leaves, Tofukuji temple in Higashiyama Ward is particularly popular, attracting as many as 35,000 people a day during peak season. The temple's Tsutenkyo bridge provides a panoramic view above a steep gorge of about 2,000 trees turning red and yellow below you. It is said that the place was once a popular spot for viewing cherry blossoms. How did it change into a place famous for autumn colors?

Regent Kujo Michiie founded Tofukuji as the temple of the Kujo family in the middle of the Kamakura period (from the late 12th century to the early 14th century), taking 19 years to build the main hall. Tofukuji's name combines kanji characters from the names of Todaiji and Kofukuji temples in Nara.

Zen priest Enni, who was appointed as the temple's first chief priest after returning from Song dynasty China, is believed to have planted a trident maple that he brought from China at the temple. The maple features three-lobed leaves and golden colors, sometimes called "Tsuten-momiji" (autumn leaves). About 20 descendants of the original maple still grow on the premises.

Still, until the Muromachi period (from the early 14th century to the late 16th century) the temple was most well known for cherry blossoms. According to Shoshun Nagai, manager of the temple's public relations, there were more cherry trees than maples at one time.

Where have the cherry trees gone?

The turning point came in 1408. That year Mincho, the temple's painter and priest, completed an artwork depicting the death of Buddha. Ashikaga Yoshimochi, the fourth shogun of the Muromachi shogunate, saw the large-scale painting, measuring 12 by 6 meters, and offered a reward to the painter.

Maple trees were planted instead, apparently to match the original maple brought at the time of the temple's founding. Toward the end of the Sengoku (warring states) period (from the late 15th century to the late 16th century), maple leaf viewing, called momiji-gari, spread mainly among the upper class. "Tinted leaves wither and fall as time goes by. That reminds us of our own lives. Unlike the festive mood of cherry-blossom viewing, [autumn leaves] are somewhat melancholic. The viewing of autumn foliage was originally done in a rather pensive mood," said Yozaburo Shirahata, an honorary professor at the International Research Center for Japanese Studies.

"Miyako-meisho-zue" (Pictorial guide to scenic spots in Kyoto), published in 1780, an early guidebook to Kyoto, notes that there were many maples under the Tsutenkyo bridge, and that the colour of the late-autumn leaves was something that could only be seen in Kyoto. "Miyako-rinsen-meisho-zue" (Pictorial guide to gardens in Kyoto), published in 1799, has an illustration showing people enjoying the autumn leaves, eating bento meals on a bench at the ravine and heating sake with portable equipment. "Urban residents were easily able to visit the temple. The event became a popular amusement for closing the outing season," Shirahata said.

The phenomenon apparently was something Mincho never imagined. If people visit the temple later in the year to see withering leaves, they can feel the transience of life with the changing of the seasons. But there are few visitors in such a season.

Enni (1202-1280), Tofukuji temple's first chief priest, was born in Suruga, currently Shizuoka Prefecture. He was awarded the name of Shoichi Kokushi by the emperor after his death.

He studied for six years in Song dynasty China. In Hakata, where he sojourned, Enni went around the town sprinkling holy water to ward off an epidemic. This act is believed to be the origin of the Hakata Gion Yamakasa summer festival.

Together with Buddhist holy books, Enni brought a blueprint of a machine to mill flour using water power, spreading the method of making udon and soba noodles. He is also known to have brought green tea seeds to his native province of Shizuoka. The city of Shizuoka has designated Nov. 1, Enni's birthday, as the "day of tea."