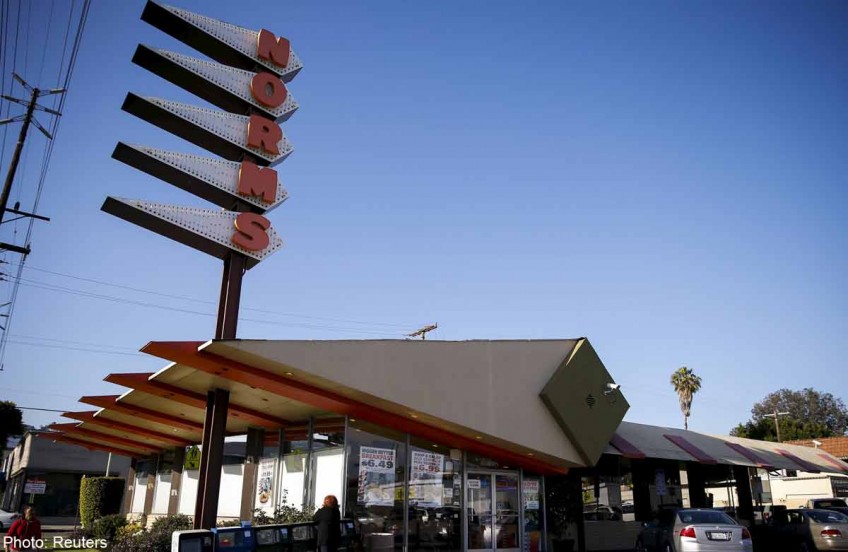 LOS ANGELES - A Los Angeles diner celebrated as a classic example of mid-20th century Space Age-style Googie architecture was granted historic monument status by city officials on Wednesday, protecting it from the threat of demolition.

The Los Angeles City Council voted unanimously with three people absent to designate the 1956 Norms restaurant as a "historic-cultural monument," citing the need to preserve distinctive buildings of the city.

Owners of the restaurant and cultural touchstone on La Cienega Boulevard had obtained a demolition permit earlier this year, prompting conservationists and officials to rally to preserve the site. They obtained a unanimous recommendation from the Los Angeles Cultural Heritage Commission to protect it.

"One of the worst things about LA is that we've torn down a lot of our heritage," City Councilman Paul Koretz told Reuters. "One of the best things is we're now fighting to save it."

Under the new designation, developers seeking to change or raze the site would need to undergo significant and lengthy reviews.

"We expect there's not any way it will get demolished," said Koretz, adding that he is working with the owners to keep Norms at the site.

The restaurant, part of the Norms diner chain in Southern California, was designed by architects Louis Armet and Eldon Davis. It is famous as an example of Googie architecture with its cantilevered roofline, sharp angles and sweeping curves.

The post-World War Two architectural style originated in Southern California and was often employed for coffee shops. It is characterized by Space Age design elements, taking influences from cars and jets.

It has also influenced the city's artists and writers.

Tom Waits mentioned the Norms location in his song "Eggs and Sausage," while artist Edward Ruscha painted it in his "Norms La Cienega On Fire" and "Mad Men" creator Matthew Weiner wrote early notes there for the hit television show that depicted 1960s America.

Koretz called it perhaps the best remaining example of the Googie style in Los Angeles, and said he aims to work with owner JDM Holdings to keep it alive as a "community institution."

A number of other notable eateries similar to the Norms location have been torn down over the years in Los Angeles, he said.