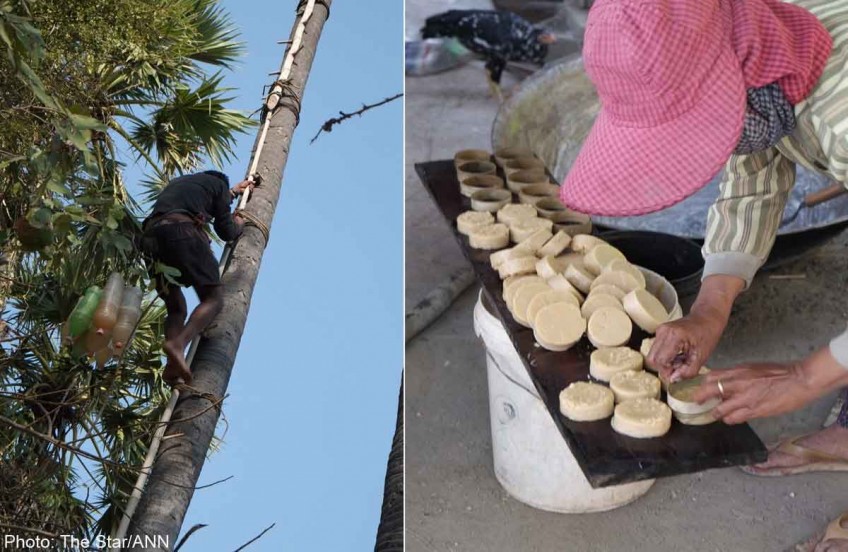 At the first light of day Meng Chek deftly scales up the nearly 10m-high palm tree with a parang and a bunch of recycled plastic bottles hanging from his waist.

He does this by using an old bamboo stalk secured to the tree trunk and using the dried offshoot stems as footholds. It takes him only a few minutes to reach the top.

When he reaches the top, Meng Chek cuts off the young palm stem and allows the sap to drip into the bottles that each contains a pol pal wood chip that he had dropped in earlier.

The wood chip, he explains, would help to bring out the sweetness from the juice. Half an hour later Meng Chek comes down with the bottles half filled with sap.

He does this with much ease twice every day and has been at it since he was a teenager. Tapping palm sap to make coconut palm sugar has been a tradition for several generations in his village Kampung Battambang in Pursat, about 3½ hours' drive from Phnom Penh.

Pursat is the fourth largest district in the west of Cambodia where coconut palm sugar production is a common livelihood.

The palm tree is a national tree of Cambodia and grows wild on the road side or intermittently in rice fields. The law forbids the felling of these trees, which are considered common property for tapping.

It is by mutual understanding that one does not tap from a tree that has been tapped by someone else.

Meng Chek, 54, a third generation palm sugar producer, came to live in Kampung Battambang when he married his wife Chann Sory, 60. Since then he has taken over tapping from the same trees that Chann Sory's father had been tapping for years.

Soon after removing the pol pal wood chips from the bottle he takes a gulp of the light yellowish liquid before pouring the rest into a huge kuali over a high log fire.

Here Chann Sory takes over the process by stirring the liquid with a long wooden paddle until it reaches a rolling boil.

About 1½ hours later, the liquid begins to thicken and the heat is lowered to prevent the thick caramel-like sugar from burning. Chann Sory continues to stir for another hour until the sugar turns into a sufficiently dry paste.

It is then transferred into a pail to cool before it is sold to middlemen or individual buyers. The warm crumbs sticking to the bottom of the kuali taste delicious and have the aroma of fresh toasted coconut.

This yellow liquid "gold" today is a popular natural sweetener that is touted to be a superfood of the century with numerous health benefits.

The huge pots of palm sap boiling on the fire.

Palm sugar is a natural sweetener that has been used in India and many south-eastern countries for thousands of years. It is high-energy burning which means it helps to increase metabolism and is slowly absorbed by the body thus avoiding sugar level to shoot up. This in turn will help with the management of diabetes, hyperglycemia and hypoglycemia.

Although there is growing demand for palm sugar in the marketplace, the producers are unhappy that they have not been paid a fair price by the middlemen.

"We don't mind doing this for a living but it is hard work, the hours are long and the money is little," said Chann Sory who has only one son, out of four children, who produces palm sugar.

The disinterest of the younger generation is not the only challenge that this industry faces.

Wood that is needed to fire the stove for cooking the palm sugar is also being depleted because certain companies have acquired logging rights in their area and this cuts off their source of firewood and pol pal wood.

"I can go farther into the jungle to collect them but I am getting old and this is very difficult for me," said Meng Chek.

The recent focus on business in Cambodia has brought businessman like Malaysian Chang Kwok Chuan to the country in search of agricultural products like rice and palm sugar for export.

"Producing palm sugar is a labour-intensive process. We need a large volume to make it economically viable for export. The quality of palm sugar in Kampung Battambang is good," Chang said.