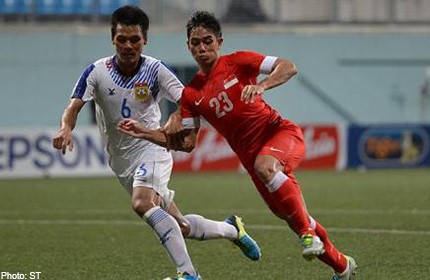 SINGAPORE - It was the result that their coach called for - a victory to snap a three-match losing streak.

But if Bernd Stange was looking for a show of character from his Singapore side, last night's 1-0 friendly win over Laos left much to be desired.

"No, it wasn't good enough," the German said after seeing his side labour to victory at Jalan Besar Stadium.

"I was very pleased with the first 30 minutes but we have to keep this up for the full 90 minutes."

With one eye on December's SEA Games in Myanmar, Stange named eight players who will be eligible for the Under-23 tournament in his starting line-up.

Among them were 17-year-old playmaker Adam Swandi, 22-year-old central midfielder Zulfahmi Arifin and 22-year-old right-back Madhu Mohana, all of whom were making their first international starts.

But it was the more experienced Khairul Amri who grabbed the winner in just the second minute of a game that kicked off an hour late owing to heavy rain.

The 28-year-old was on hand to tap in at the far post, after a lovely bit of interplay between Shakir Hamzah and Hafiz Abu Sujad down the left flank.

It was the sort of pass and move football that Stange has extolled since his arrival in May.

But that was as good as it got for his side against a distinctly second-rate Laotian team.

Like Stange, coach Kokichi Kimura was looking ahead to the SEA Games and started with just one player aged above 23.

His side were not helped by the fact that they had played just 48 hours earlier, in a 2-1 win over a Singapore B team.

But with their opponents seemingly ripe for the picking, the Lions failed to shine in front of a 1,812-strong crowd.

Their second-half performance, in particular, was littered with sloppy passes and had all the worrying signs of a team with a lack of ideas going forward.

It was only after the introduction of national captain Shahril Ishak for Shahfiq Ghani in the 63rd minute that the hosts began attacking with more intent.

Even then, visiting goalkeeper Seng Athit Somvang was troubled only by Shaiful Esah's dipping free kick and Shahril's close-range effort from a long ball out of defence.

It will give Stange plenty to think about in the lead-up to Tuesday's visit of Syria in an AFC Asian Cup qualifier.

"Syria are on a different level," he said.

"It could be that we will add some experience to the team."