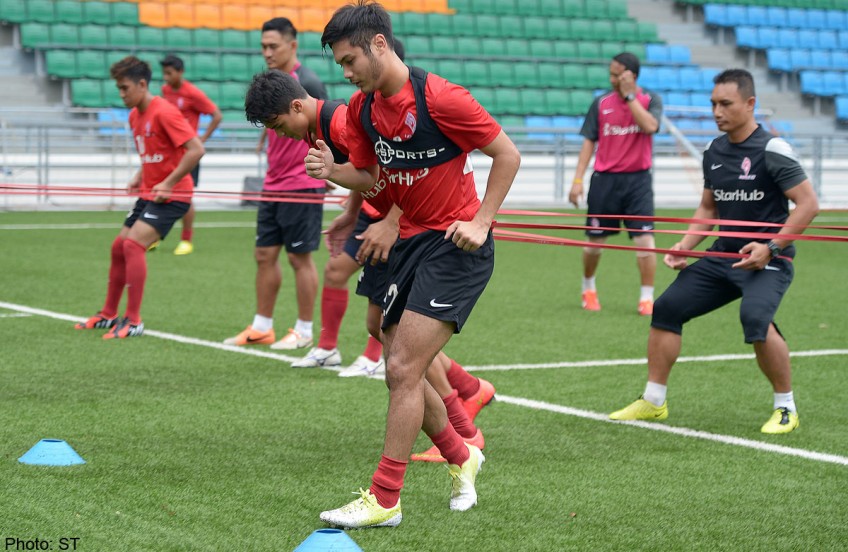 Christopher van Huizen, seen here during the LionsXII training, at the Ja;an Besat Stadium on 23 December 2014. The fleet-footed winger is one of the LionsXII coach’s new signings for the upcoming Malaysian Super League (MSL) season, having moved from S-League side Tampines Rovers.

When Christopher van Huizen was 13, he often played football at a street court near his home, against boys three to four years older than him.

But, on the concrete floor of this Marine Parade court, the spindly kid found himself in a different league.

Said van Huizen, 22: "I was one of the youngest and skinniest, and I couldn't cope with the bigger boys, who could knock me off the ball easily.

"I didn't play well at all and was often the last to get picked."

But he has now caught the eye of a certain Fandi Ahmad.

The fleet-footed winger is one of the LionsXII coach's new signings for the upcoming Malaysian Super League (MSL) season, having moved from S-League side Tampines Rovers.

Said Fandi: "He is a very intelligent player, comfortable on the ball and his asset is his pace.

"He still needs to get used to the high pace and we need to build him up physically.

"More importantly, he is willing to learn and fight for his place.

"Sooner or later, he will start playing for the first XI because I see a lot of potential in him."

Rafi Ali, interim coach of Tampines last season who gave van Huizen his S-League debut, said: "He's got natural ability, a good football brain and is good with both feet. "If he works hard, I'm sure he can go very far and even be one of the best players in LionsXII."

Van Huizen, who was a hurdler in primary school, is the archetypal late bloomer - he made his professional bow for Tampines only in July, scoring on his debut.

It marks a dramatic turnaround for a player who once contemplated quitting football.

In 2010, while he was in the Tampines' Under-18 team, he took part in The Chance, a Nike football talent search competition where Fandi was on the panel of coaches, but fell at the last hurdle.

He finished third and missed out on a trial in London.

The former ITE College West student continued training with Tampines but dropped out after enlisting for national service.

"Missing out on London was one of the lowest points of my career. I thought I wasn't good enough and felt I was stagnating at club level.

"I thought I should probably focus on studying instead," said the Eurasian Singaporean.

Towards the end of NS, he got a second wind after impressing on reality TV programme First XI and he joined the Stags' Prime League team last November.

He credits his businessman- father Gerard, 59, for encouraging him throughout this trying period.

While his road to professional football was slow, his progress since has been anything but.

On July 31, he scored his first and only league goal for Tampines in a 2-0 win over Woodlands.

Three months later, he was selected by Richard Bok for the Singapore squad that played in the U-21 Vietnam Newspaper Cup, and started in all three matches.

Then came the call from the LionsXII.

Having gone under the radar for so long, van Huizen is eager to make up for lost time.

He is already putting in extra shifts outside of club training, pumping iron in the gym and doing interval training to build up his stamina.

The 61kg, 1.72m player said: "I know I am far from ready. I still need to build up my upper body strength to withstand the physical knocks and improve my fitness to run up and down the wings.

"My goal is to break into the starting XI.

"I also hope to impress enough to make the SEA Games squad."

This article was first published on December 24, 2014.
Get a copy of The Straits Times or go to straitstimes.com for more stories.