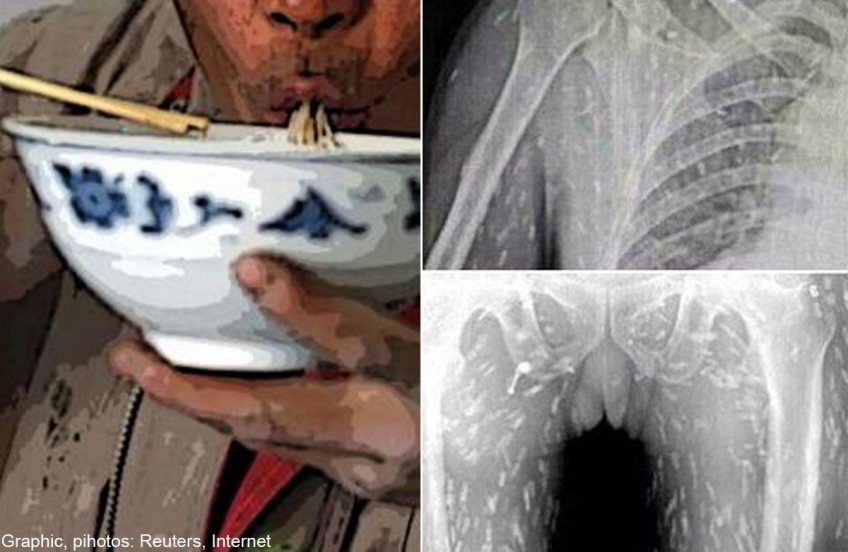 A Chinese noodle vendor in northern Shaanzi province was caught by the authorities after he added powdered opium poppy seeds into his dishes in a misguided attempt to increase his business.

According to BBC News, the shop owner's deed came to light after one of his clients tested positive in a routine urine test by traffic police. The customer, Liu Juyou, insisted he had never touched drugs, and started suspecting the noodle shop he had eaten at a few hours before the test.

Liu subsequently asked his relatives to eat at the noodle shop and get themselves tested for drugs. After Liu's relatives tested positive as well, the shop owner was brought in for questioning by the police.

The shop owner - identified only as Zhang - then admitted that he had bought 2kg of poppy buds and crushed them into powder to add to his noodles.

According to CNN, lacing foods with opium poppy is not an uncommon practice in China, with similar cases reported in 2010 and 2012.

In another piece of news that casts doubts on China's food safety standards, a man from Guangdong was admitted into hospital after his love for sashimi resulted in a body riddled with tapeworms.

A report on EpochTimes said that Dr Zhang from the Southern Medical University Hospital in Guangdong told local media that a man was admitted into the gastroenterology department after a visit to the emergency department on Sep 14.

Dr Zhang, the doctor in charge of the case, said that her patient complained of extreme pain in his abdomen and itchiness in his skin. He also brought the X-ray films, which are currently circulating on the Internet, to show to his doctor. He also informed her that he enjoyed eating sashimi.

He said that people unintentionally ingest foods containing tapeworm eggs and that medical records revealed that wild snakes are found to contain the largest number of tapeworms. He said that raw fish, pork and beef can also expose people to parasitic infections.

Yin explained how tapeworms cause parasitic infections in the human body. Ingested tapeworm eggs enter the human digestive system and feed from it, and after growing into larvae, travel to other parts of the human body via the bloodstream.

Adult tapeworms may eventually enter the brain and cause neurocysticercosis, a parasitic infection of the brain. Tumours may also form as a result of the infection.

In addition, Yin dispelled rumours that eating sashimi with wasabi or drinking liquor can "kill germs and worms", and advocated eating cooked fish and meat to prevent parasitic infections.

According to MedlinePlus, freezing raw fish at −20°C for 24 hours will kill potential parasites. The National Environment Agency (NEA) also advises the public to consume only sashimi grade raw fish, which have been frozen as a food safety precaution.