The lawyer and his vision for S'pore 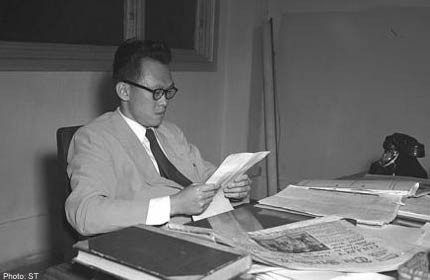 Singapore's transition "from Third World to First" owes much to Mr Lee Kuan Yew's embrace of the rule of law.

SINGAPORE - On Tuesday night, the National University of Singapore conferred an honorary degree of doctor of laws on Mr Lee Kuan Yew. I was asked to serve as public orator, describing some of Mr Lee's achievements in support of the award.

But what is there to say about Mr Lee Kuan Yew that has not already been said?

I knew that I would join a list of many who have acknowledged his contributions to Singapore, its region and the world.

The late Baroness Margaret Thatcher, for example, once wrote that Mr Lee "had a way of penetrating the fog of propaganda and expressing with unique clarity the issues of our times and the way to tackle them".

Welcoming him to the White House a few years ago, United States President Barack Obama called Mr Lee "one of the legendary figures of Asia in the 20th and 21st centuries", crediting him with significant responsibility for the Asian economic miracle.

And China's President Xi Jinping has referred to him as "our senior who has our respect".

Books have been written - and many more will be - about Mr Lee as a leader, as a politician and as a strategic thinker.

The degree was an honorary doctor of laws, however, and I had been asked to speak in my capacity as dean of the National University of Singapore Faculty of Law.

So I decided to speak about Mr Lee Kuan Yew as a lawyer, and the role that law played in his vision for Singapore.

THE basic facts are well known.

In the course of an education disrupted by World War II, Mr Lee graduated in 1949 with a starred first-class honours in law from Cambridge.

Along the way, through the influence of lecturers such as Harold Laski at the London School of Economics and his experience with the British Fabians, the seeds of a pragmatic approach to governance were sown. So was the vision of independence from colonial rule.

Yet Mr Lee later recounted that it was his experiences of life in Japanese-occupied Singapore - and the dysfunctional British Military Administration that followed - that left an indelible mark. In particular, they convinced him that law and order were essential for stability and development.

Mr Lee might have pursued a career at the English Bar, but he returned to Singapore in 1950 to practise law. His early clients were often trade unions and associations, meaning that he earned considerably less than he could have as a lawyer. When the cause was worthy and the clients needy, he waived his fees entirely.

In 1955, he set up a law firm, Lee & Lee, together with his brother and his wife, Madam Kwa Geok Choo. The firm is now one of Singapore's leading practices.

But politics was Mr Lee's true calling. So he left the firm to pursue politics full-time, soon joined by his partner and fellow Cambridge graduate E. W. Barker, who later served as Singapore's minister for law for more than 40 years.

The rest, of course, is history.

Mr Lee led the People's Action Party to victory in the 1959 General Election. It was the first of eight such victories that saw him serve as prime minister of Singapore until he stepped down in November 1990 - at the time making him the longest-serving prime minister in the world.

Since then, he has remained actively engaged as senior minister and later, minister mentor. He has also written and spoken extensively about the lessons he learnt during his years in office, and the "hard truths" that he believes Singaporeans must confront if the stability and prosperity they now enjoy are to be maintained.

The rule of law

THOUGH he did not practise law as such after leaving Lee & Lee, Singapore's subsequent transition "from Third World to First" owes much to his embrace of the rule of law. The foundations of Singapore's role as a financial centre, he later wrote, were the rule of law, an independent judiciary and a government that was competent, stable and honest.

As prime minister for a generation, he oversaw Singapore's traumatic birth and extraordinary rise.

Singapore's gross domestic product is frequently cited as evidence of this growth, moving from $400 per capita to around $60,000 today. But Singapore is also distinguished by its greenery and by the life expectancy and literacy of its population, which are among the highest in the world.

Underpinning all of this is the order and security that makes such prosperity possible. To pick just one measure, in the most recent World Justice Project report on the rule of law, Singapore was ranked first in the world for order and security, and first in Asia for civil and criminal justice.

None of this was foreseeable when Mr Lee took the uncertain reins of leadership in 1959; still less when Singapore abruptly became independent in 1965.

Just a month after that independence, he gave a speech at the Sree Narayana Mission. "Over 100 years ago," he said, "this was a mudflat, swamp. Today, this is a modern city. Ten years from now, this will be a metropolis. Never fear."

"Never fear." Bold words at a time of considerable fear. Yet Mr Lee had an unshakeable belief that Singapore could thrive and prosper, that it would be safe and green, with a population that was multiracial and multilingual.

TODAY, Singapore stands not only as a testament to what can be built through vision and industry. It is also testimony to the importance of law in creating the conditions for such a vision to be realised.

This is most obvious domestically, but the rule of law also served Singapore well internationally.

As Mr Lee noted when receiving another honorary degree - from the Royal University of Cambodia in 1967 - the project of converting international morality into international law has enjoyed mixed success.

Yet bilateral and multilateral agreements have helped ensure Singapore's security and its links to the global economy. Mr Lee's role in the creation of Asean normalised relations with Singapore's neighbours, in particular, Indonesia; it also fostered increasingly strong economic and political ties across South-east Asia.

Law also offered a means of resolving disputes peacefully. In a book on Pedra Branca, the subject of a territorial dispute with Malaysia that was adjudicated by the International Court of Justice, Mr Lee wrote that "Singapore must remain committed to upholding the rule of law in the relations between States. If a dispute cannot be resolved by negotiations, it is better to refer it to a third-party dispute settlement mechanism, than to allow it to fester and sour bilateral relations".

Few people are so closely identified with the entire history of a country, as Mr Lee Kuan Yew is with Singapore.

Few people have had such an impact not only on a nation's development, but also on its character.

That impact stretches far beyond Singapore, as the testimonials mentioned earlier - and countless more - demonstrate.

Lee Kuan Yew has made Singapore his life's work. His success launched a country, inspired a continent and earned admiration from around the world.

The writer is the dean of the National University of Singapore Faculty of Law.