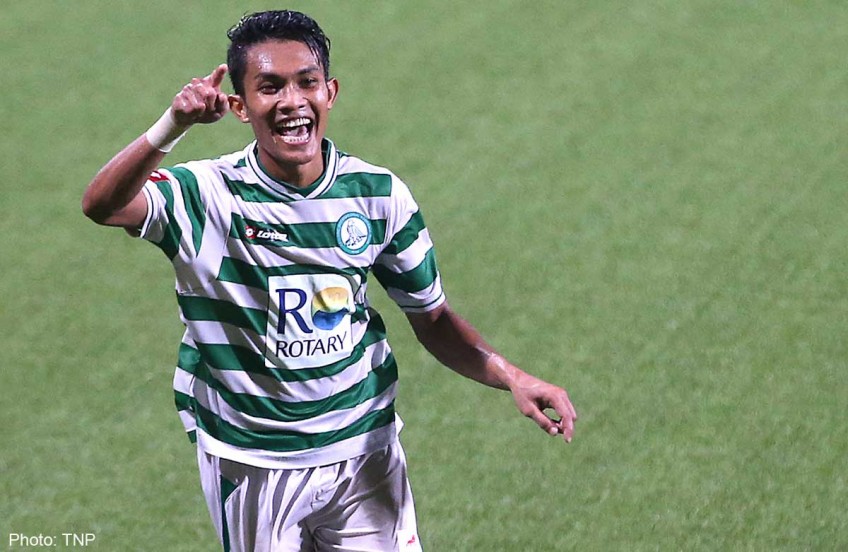 Hafiz Nor hopes his goal can reignite his national career under coach Bernd Stange.

Are you watching, Bernd Stange?

It may be a matter of time before the national coach takes notice of Geylang International midfielder Hafiz Nor if he continues to produce Man-of-the-Match performances like he did in last night's StarHub League Cup quarter-final clash against Albirex Niigata.

The 25-year-old served notice of his attacking abilities when he won a 54th-minute penalty and scored with a glorious chip over Kenjiro Ogino in the third minute of second-half added time to seal a 3-1 victory over Albirex.

The Eagles will meet Brunei DPMM FC on Monday to fight for a place in next Friday's final, while Hougang United face Tanjong Pagar United in the other semi-final after the Jaguars beat Warriors FC 1-0 last night at Queenstown Stadium.

Last night's match at the Jalan Besar Stadium resembled a boxing bout, where a jab by Albirex was matched by a hook from Geylang as attacks and counter-attacks ebbed and flowed.

The White Swans' defence was breached in the 20th minute when Mustaqim Manzur's corner was met by former Albirex defender Kento Fukuda's brilliant diving header that gave Ogino no chance.

Hafiz then took over when he waltzed past Itsuki Yamada on the right flank, only to be brought down by the Albirex skipper inside the box.

Argentina striker Leonel Felice made no mistake from the spot.

Norihiro Kawakami pulled one back for Albirex in the 70th minute via a header off Kazuki Sakamoto's cross after Mustaqim failed to clear his lines following a corner.

But Hafiz had the final laugh, when he showed great pace even in the dying minutes of the match to chase Joaquin Lopez's clearance, out-muscle the bigger Koki Akasaka, and chip over Ogino from 25 metres to cap a fine individual performance.

"We listened to our coach and gave our all, and that was my last burst of pace because I was already very tired," said Hafiz, who made his international debut against Laos in June 2013 under Stange.

However, the 66-year-old German has not called him up since and, in his latest call-up for an Austria training tour, just four out of 21 players were from S.League clubs outside Courts Young Lions and M-League teams LionsXII and Johor Darul Ta'zim.

Hafiz added: "I saw the goalkeeper off his line, so I tried to score, and I'm happy it went in.

"I respect the national coach's decisions, but I feel there are talents in the S.League who ought to be considered for the national team.

"As players, all we can do is continue to do our best and, if the national coach thinks we deserve a chance, then that's great."

Geylang coach Jorg Steinebrunner refused to single out any individuals, opting to praise his team for delivering a good performance despite playing in a 4-0 win over Warriors FC just three days earlier.

He added: "It was a good, end-to-end game where both teams tried to play good football.

"The entire team rose to the occasion and now we can look forward to our semi-final against DPMM."

TNP Man of the Match: Hafiz Nor (Geylang International)