Liew in Kenya to train for faster times 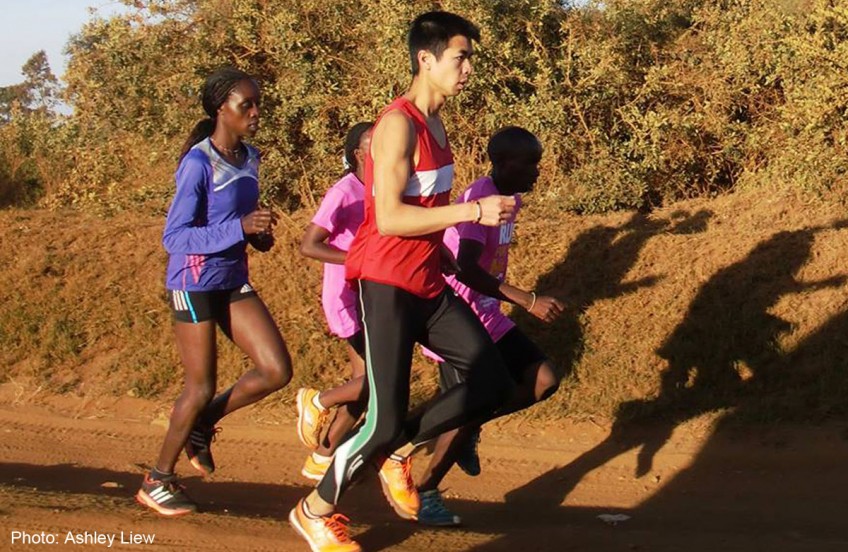 Singapore marathoner Ashley Liew, training with his running group on the dirt roads of Iten, Kenya.

SINGAPORE - Hardly any, however, have managed to see first-hand how deeply ingrained the culture of running is among the Kenyans.

Singapore marathoner Ashley Liew is one of the fortunate few, and his most vivid memory of just how much Kenyans love running was when he spotted a man wearing a full suit in the town of Iten, in Elgeyo-Marakwet county, clutching a briefcase - and wearing hot pink running shoes, ready for his daily jogging routine together with his day job.

"You read and hear so much about their greatness but it's only when you are here that you see why," said the 28-year-old.

"Everywhere you turn, you see people running, on the mud trails or dirt road. Sometimes in groups of 200, training at dawn and then again in the evening.

"And these are people who already clock around 2hr 15min for the marathon. So training here has been a real eye-opener."

Liew, however, is not in Kenya to merely experience the running culture. He is in the midst of a three-week training trip to Iten in a bid to boost his winning chances in June's Singapore SEA Games.

Said Liew, whose coach is Singapore's marathon record-holder Murugiah Rameshon: "The goal is to qualify for the SEA Games, and if I do, to better my performance from 2013. It's held in Singapore and it'll be special to compete in front of the home fans."

Liew's Kenyan base is the High Altitude Training Centre (HATC) in Iten, known in running circles as the "Home of Champions".

There, he is in good company.

The HATC, which sits at about 2,438m high, is owned by Lornah Kiplagat, a four-time world champion who still holds the 15km, 20km and half-marathon world records.

The camp is frequented by international athletes from the likes of Britain, the United States and Germany before major meets.

The self-funded trip - which ends today - has cost him about $6,000 and already he is seeing improvement in his timings since he began training on Dec 16.

He has noted 50sec improvements in his 5km splits, after adapting well to the high altitude, without the pounding headaches and shortness of breath that might afflict those struggling to adjust to the thin air.

His personal best, clocked at last year's Chicago Marathon, is 2:35:39.

The 2012 Standard Chartered Marathon Singapore winner, who finished eighth at the 2013 SEA Games in Myanmar in 2:42:55, aims to meet the cut at the New Orleans Marathon on Jan 25.

Only two runners can represent Singapore at the Games, and competition is stiff.

Regardless of the outcome, Liew - a student at the Sherman College of Chiropractic in the US - is positive the results of his stint will benefit him in the long run.

He said: "It's been a really empowering trip, seeing how passionate, single-minded and determined the Kenyans are about running, and how humble they remain despite their achievements.

"The conditions definitely play a part but what makes them great is their mindset, and that is the biggest thing I will take away from here."

This article was first published on January 04, 2015.
Get a copy of The Straits Times or go to straitstimes.com for more stories.