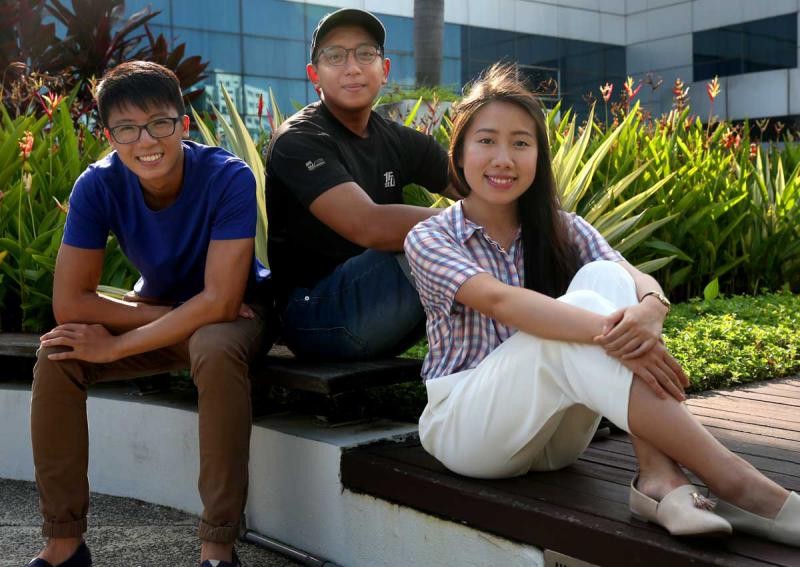 The trio had the opportunity to work as interns on the set of the new sci-fi romance Equals, starring Hoult and Kristen Stewart, when parts of the Hollywood movie were filmed in Singapore two years ago.

Mr Seow and Mr Hakiki were among nine Institute of Technical Education (ITE) College Central students doing a course in Filmmaking (Cinematography). They spent 27 days on set as part of their final year internship programme.

Miss Wong, a National University of Singapore undergraduate, was a production assistant to Equals director Drake Doremus, a job which required her to "order the same pizza and salad" from Pizzeria Mozza for the US film-maker every day.

"It was very nice to look at Nicholas Hoult every day. Not bad for a school holiday job," said Miss Wong, 21.

Equals is set in a future where all human emotions are eradicated in order to maintain peace and order. However, when Silas (Hoult) and Nia (Stewart) find themselves drawn to each other, they need to keep their forbidden romance a secret and find a way to escape their regimented society.

"Nicholas was so friendly. He said 'hi' to everyone on set every day," said Mr Hakiki, 22.

The full-time national serviceman shared how the 26-year-old, 1.9m-tall heart-throb even gave him a bear hug after they had filmed a behind-the-scenes segment.

"I had to hold up a reflector board throughout the half-hour filming as we had run out of stands," said Mr Hakiki, who was a junior lighting grip.

"After Nicholas finished the interviews, he walked to me and gave me a hug, and said thanks. I didn't even know he had noticed what I was doing!"

As for Stewart, the trio said that while the 26-year-old US actress was friendly, she kept to herself most of the time.

"She has her own assistants, so she didn't mingle much with everyone," said Mr Seow, who joked that his role as a production assistant was "the smallest one" - he was in charge of food and drinks for the cast and crew, "get them whatever snacks they want and take out the trash".

Asked about their most memorable moments on set, Mr Seow recalled how torrential rain threatened to halt production on the day they were filming at the Singapore Botanic Gardens.

"We were on site early to set up and were drenched from head to toe as there were no shelters. I had to put up with 16 hours of wet socks and shoes. It was not a good day," he said.

For Miss Wong, she was impressed by the efficiency of the Traffic Police, whom they had enlisted on some days to help direct traffic.

"During the overnight shoot at Henderson Waves, they actually stopped cars that were driving along Henderson Road.

"As the director was picking up vehicular sounds, the police also got the drivers to turn off the engines," she said.

"When the director said 'cut', the police got the traffic going again. It went on for a while."

Although the internship was tiring and challenging, all three agreed that it was also rewarding and enriching, and being on a Hollywood production was a once-in-a-lifetime experience.

Mr Seow and Mr Hakiki had interned on other production sets during their two-year ITE course. Mr Seow was involved in Jack Neo's The Lion Men (2014), Malay movie Banting (2014) and reality TV show Asia's Got Talent.

Mr Hakiki said: "To be able to learn from the pros and learn about the Hollywood working culture was an eye-opener."

This article was first published on May 25, 2016.
Get The New Paper for more stories.