Why not take a tiger-themed trip this year? A tigress moves her cubs in the Thung Yai-Huai Kha Khaeng Wildlife Sanctuary in Thailand.

With the Lunar New Year almost upon us, here are 10 tiger-themed travel ideas. Sure, most of them are currently off-limits to the travelling public, but there’s no rule against making plans …

One of the deepest and most dramatic river canyons in the world, Tiger Leaping Gorge, in Yunnan province, southwest China, is a magnet for hikers. Apart from the initial series of switchbacks, the 17km, two-day trail isn’t especially strenuous. The scenery is jaw-dropping, though.

It’s a dizzying 3,800 metres from the Jinsha River, as that section of the mighty Yangtze is called, to the jagged and seasonally snow-covered surrounding peaks. The trail takes walkers away from the roar of the river, past meadows, forests and terraced agricultural land, to conveniently located overnight accommodation.

Despite being one of China’s most popular attractions, the route isn’t crowded, although you might be pursued by locals with mules who hope you’ll throw in the towel and accept a ride.

The island of Fuvahmulah, in the Maldives, offers scuba divers the opportunity to get up close and personal with tiger sharks, without the protection of a sturdy steel cage. An estimated 200 tiger sharks gather to gorge on fish heads and other marine waste dumped by workers at the waterfront market.

The four-metre-long man eaters are more curious than aggressive — as long as you follow the strict rules imposed by the experienced guides who are responsible for divers’ safety. Be sure to bring (or hire) an underwater camera. 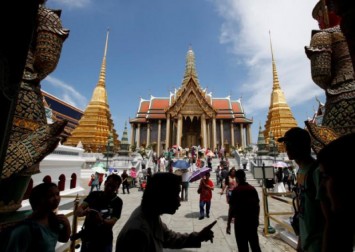 Thailand’s tiger sanctuaries have had an image problem in recent years. Incidences of abuse include taking cubs from their mothers soon after birth, declawing, drugging and locking the animals in concrete cages. Establishments have been closed amid concerns over illegal trading and mistreatment of the tigers for commercial gain.

There are some success stories, however. Reports based on data from monitoring cameras suggest the number of Indochinese wild tigers at the Thung Yai-Huai Kha Khaeng Wildlife Sanctuary has almost tripled.

Thanks to anti-poaching initiatives introduced in 2006, the park now boasts the largest population of tigers outside the Indian subcontinent, and the only cohort of big cats in Southeast Asia that is actually thriving.

One of many candidates for the title of Venice of the East, Hongcun served as a backdrop for scenes in the Oscar-winning film Crouching Tiger, Hidden Dragon (2000). The village, in Anhui province, dates back 900 years and was landscaped according to the principles of feng shui.

The Unesco World Heritage-listed settlement is situated at the foot of a hill with a network of waterways that feed into Nanhu (South Lake) and Yuezhao (Moon Pond). View Hongcun from above, and with a little imagination, you’ll be able to make out the shape of an ox.

Sticking with tiger-related topography, let’s make our way to Darjeeling, in the foothills of the Indian Himalayas. The best time to visit nearby Tiger Hill (2,590 metres) is at sunrise, when the first rays of light illuminate the world’s highest peak, Mount Everest, and Kanchenjunga, the third highest.

After photographing the spectacle, head back into town for breakfast and a pot of Darjeeling, regarded as the champagne of teas.

From one hot drink to another. Sumatra is renowned for high-quality, hand-picked coffee that thrives thanks to the Indonesian island’s climate and fertile volcanic soil. The Tiger (aka Harimau) coffee brand is grown at altitude by farmers working as part of a cooperative in the Aceh rainforest.

Sadly, the global demand for Sumatran coffee has led to the illegal clearing of land for plants, even in protected areas where critically endangered tigers, elephants and rhinos coexist.

From coffee to something a little stronger. Singapore’s first locally produced beer has been quenching thirsts since 1932 and, over the years, has won a number of awards. Visitors on a Tiger Brewery Tour learn about each step of the brewing process, from milling the malt to bottling.

There’s also a lesson in how to pour the perfect glass of draught, followed by free samples (you didn’t join the tour for a souvenir bottle opener, right?). The last stop is at the Tiger Tavern, where visitors enjoy a tasting session that allows them to compare seven varieties of beer, hic!

While we’re in Singapore, let’s head to Tiger Balm Gardens. After the demolition of a villa built by Aw Boon Haw in 1937, the pain-relief ointment tycoon and his brother, Aw Boon Par, set about turning the grounds into a surreal Chinese mythology theme park complete with statues, sculptures and Confucian dioramas.

Two years earlier, the brothers had built a similar attraction in Tai Hang, Hong Kong, that featured a 44-metre pagoda. In 2004, the Hong Kong gardens were redeveloped as luxury housing and today only the mansion and a small garden remain.

Getting to the Singapore park is as easy as jumping onto a train on the MRT Circle line and getting off at the Haw Par Villa Station.

Back in Yunnan province, the Flying Tigers Museum, in Kunming, is dedicated to American volunteers who supported the Chinese military in their war against the Japanese.

As the First American Volunteer Group of the Republic of China Air Force and later the 23rd Fighter Group of the United States Army Air Forces, the airmen dubbed the Flying Tigers destroyed hundreds of enemy planes and killed an estimated 60,000 Japanese soldiers during a four-year campaign that ended in 1945.

Exhibits include photos and maps, uniforms, medals and pilot training manuals. A model of a Curtiss P-40 Warhawk aircraft, its teeth bared, hangs from the museum ceiling.

Let’s finish with somewhere that’s not off-limits to Hongkongers due to Covid-19 restrictions. On Lantau Island the Lo Fu Tau, or Tiger’s Head trail, takes hikers from Mui Wo to Discovery Bay, or vice versa.

The path leading up and out of the latter is strewn with boulders and loose gravel — some ramblers prefer to negotiate this section as a downhill scramble at the end of the hike, others opt to tackle the steep uneven climb at the start, when legs are fresh.

Setting out from Mui Wo, the route follows the Hong Kong Olympic Trail as it winds towards Tung Chung. After pausing for photos at the Silvermine Waterfall Garden and Silvermine Cave, walkers switch onto the 3.4km Lo Fu Tau Country Trail.

The summit of the hill, which resembles a tiger’s head, provides sweeping vistas of Discovery Bay, the green mountains of Lantau and the city skyline shimmering in the distance. For a few serene moments you may not even care that you have been confined to Hong Kong.

Will the Year of the Tiger see us break free from our constraints?