The new-wave female fitness enthusiasts are "glamazons", or iron butterflies with plenty of masculine yang, thanks to gruelling gym routines.

Athletic Malaysian beauty queen Ammetta Malhotra tells the Post: "We all should be able to embrace our glamorous and Amazonian side. I think women's bodybuilding has come a long way."

Here are 10 of the world's most statuesque fitness models. The powerlifters and bodybuilders look feminine - some even align with that icon of prettiness, Barbie.

For many South Korean women keen to mimic sleek K-pop idol physiques, designer clothes and plastic surgery are the norm. Yeon-woo Jhi takes a different tack. The professional female bodybuilder has many major titles to her name.

Standing 1.88 metres tall, Jhi reportedly weighs between 85 kilograms and 102 kilograms yet has a prettiness that has helped her become an online star. On Instagram, Muscle Barbie - as she is nicknamed - has over 135,000 followers. She was once a scrawny, nervy kid. Her rise began when she decided to visit a gym near her house, eager to stop feeling feeble.

"I was very skinny and weak before I started working out, but I really wanted to have big muscles," Jhi told the women's fitness outlet Oxygen in 2017.

The social media phenomenon with 886,000 Instagram followers started weight training in 2012, on a quest to build strength and confidence. After shifting to powerlifting in 2013, she grew bigger and stronger.

"I had the choice to follow the path that some of my friends went down, or to fight for my happy life," she has said of her early days growing up in a ghetto.

If anyone in this space is more famous than Vins, it must be the Australian fitness model Libby Powell - a self-styled bikini diva pro with a gritty attitude. "I don't want to look skinny. I want to look like I can kick your a**," her Facebook feed says.

In 2014, Powell appeared in the now-defunct British men's magazine, Zoo, then posed as Miss February 2015 in the Australian Swimsuit Calendar. Her Instagram feed featuring the hashtag #glamfitbikinis has 1.2 million followers.

On her Facebook page, American lifter Cassandra Martin says: "I am young and training like a she-hulk in the gym." Martin works out six days a week, constantly pushing her boundaries.

Naturally thin, at school Martin was drawn to sports associated with boys. After graduating college, she worked as a builder beside her fitness guru boyfriend and was prompted to work out after seeing female bodybuilding high-flyer Jamie Eason on a magazine cover.

Martin was also influenced by the hard core training stints done by other fitness models who retained their femininity despite hard training. In a YouTube clip, Martin and her husband discuss her lugging 80-pound (36kg) cement sacks.

Holmdahl's brand name carries through her Instagram feed, which shows her wearing sparkling bikinis that belie her dark past. The former anorexic used to worry that lifting would make her bulky. But after getting sick from malnutrition, she committed to weight training.

"Use me as a real life example of someone that started as a beginner and with steady, consistent, hard work I am now reaching my potential," she says.

A post shared by Meg 💪 Join Stronger by the Day (@megsquats)

Another popular bodybuilder with a modelling pedigree, Canada-based Meg Gallagher or 'megsquats', has 300,000 YouTube subscribers.

After college, where she shone at cross-country running, Gallagher became a bikini model contestant with mixed enthusiasm.

"I loved training, but I didn't love training when I was always hungry," she told the fitness site Shape.

She turned to power lifting because it lets her gauge progress in a concrete, consistent way. Gallagher's Instagram feed, which boasts 454,000 followers, mixes workout shots with romance.

After she decided to enter the Mrs Elite Malaysia Universe Pageant in 2018, cynics carped, saying she was too muscular. Malhotra won the contest.

"To bring positive change, I knew I had to persevere," Malhotra says. She went on to compete in the Mrs Malaysia Globe pageant the same year and was crowned Mrs Globe Classic. Next, she entered her first international pageant, Mrs Classic Universe, and placed again.

"It took a lot of hard work and time, but the whole point of this was to have a bigger platform to share my message," says the holder of a master's of science rehab degree.

Martine Warmann is an English contestant who competes in the women's open 56-kilogram (123lbs) weight bracket. Warmann has also participated in beauty pageants, placing in the top seven at Miss Great Britain 2006.

Still striking, Warmann competes as a bodybuilding bikini athlete. Her roughly 11,000 Instagram followers have plenty of content to browse: 2,353 posts. For her feed, she poses in lipstick and a sparkling red bikini, mixing workout shots with motivational quotations.

"Your lack of dedication is an insult to those that believe in you," says one. Her training regime involves four weekly butt workouts. Her vegan lifestyle gives her more oomph, she says.

A post shared by Alice Round- Online Coach (@aliround) 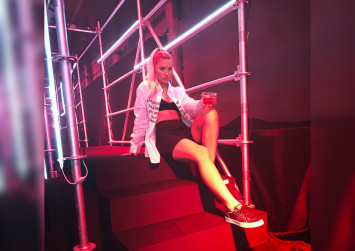 While her main line of work is bikini modelling, Australian sports scientist Alice Round has dabbled in power lifting. Still committed to a gruelling workout regime, Round trains her legs up to four times a week, her lower body three times a week and her upper body twice a week.

Round was always wiry. "So I've got to accept that I'm not going to have that kind of Kim Kardashian waist in shape, and that's cool," she says.

A former armed forces pin-up and glamour model, grandmother Angela Graham shows age is no barrier to a statuesque body.

Based in Leeds, northern England, Graham discovered weightlifting in the 1970s and irresistibly evolved into a champion bodybuilder with a stoic attitude.

Despite a hip replacement, the mental health nurse armed with lipstick and mascara visits the gym every day and can lift her own weight, which is 65 kilograms. She trains on crutches, in plaster even.