8 pounds of jackfruit, 50 omelettes: Indian mukbangers eat it all

Chicken, omelettes, KFC and noodles – mukbang YouTubers like Deepika Verma (pictured) in India are eating it all as they tackle huge amounts of food in front of an online audience.

Mounds of chicken biryani, dizzying numbers of omelettes … all eaten in front of a camera live-streaming to the internet.

These binge-eating videos are known as mukbang, which translates from the Korean for "eating broadcast"  a social media trend that began in South Korea around 2010.

Professionals who had left home to work in cities found themselves lonely and, unable to eat with their loved ones, went online to look for company while they had a meal — and the videos of them slurping noodles or munching pizza was oddly comforting for those that watched.

Since then, mukbang has morphed into live-streams or videos of (usually) young, thin people interacting with viewers as they eat a staggering amount of food. But why do people watch videos of people stuffing their faces?

Many people associate food with pleasure and happiness, some love the competitive element of if the eater can finish it all, others find it cathartic because gluttony is usually considered a vice and shameful.

For many, watching (and commenting on) mukbang videos provides a sense of community. Mukbang can be aspirational, as those who do not eat confectionery or meat can derive pleasure from watching others eat.

In a paper published in 2020 in the journal Culture, Medicine and Psychiatry, researchers wrote: "In Korean society, dining is a deeply social activity and many Koreans find it almost unthinkable to sit and eat alone, not least in public; hence, mukbang has been described as a virtual substitute for socialising while eating on your own."

Today, the trend has spread around the world, from Taiwan to Japan to the USA — and now, to India. One of India's most watched competitive eaters is a father-son pair from the small village of Chinnasalem in Kallidaikurichi district of Tamil Nadu. They have more than 1.2 million subscribers on their YouTube channel, Saapattu Raman.

The son, Sabari Kumar, was introduced to mukbang while studying in Ukraine and, on his return to India in 2018, he started a YouTube channel with his father, R. Porchezhiyan, a Siddha medicine practitioner with a voracious appetite.

The duo are famous for their eating challenges, like the one where they eat 4kg (8.8 pounds) of jackfruit in seven minutes. In others, it's just the father eating: 50 omelettes, or four chickens, or 570g of raw broccoli. The dishes are prepared by Kumar's mother and the recipes are highlighted for viewers.

"Cooking so much food is a challenge, but my mother handles it very competently," says Kumar. Their grocery bills are high but they make enough via YouTube advertising and subscriptions to foot the bill.

They attribute their ability to digest huge amounts of food to their "good genes" and an Ayurvedic tonic that they have every day.

Another competitive eating channel is Food Shood with Bijan that has 513,000 subscribers. There are people like Apei (based in Serbia) who runs the channel Apei Eats, which often features her native Naga and other northeast Indian dishes.

Deepika Verma, from Lucknow in Uttar Pradesh in North India, is probably the first woman mukbanger in India. Her YouTube channel, Foodie Bobby, has more than 49,000 subscribers and is filled with videos of her eating KFC, momos and other fast food.

In one video, she competed against her dog to see who could eat a plate of chicken biryani the fastest (the dog won). A judge by profession, Verma says: "I was inspired by [YouTuber] Peggie Neo's mukbang videos and started my YouTube journey in 2017.

"I have eaten a huge amount of food. I have tried crab, prawns, octopus spicy nuclear ramen noodles, world's hottest Jolo chips [a tortilla chip flavoured with the Carolina reaper pepper] — which made me really sick — as part of my challenges."

Most binge eaters have to adjust the way they eat to account for the huge amounts of food that they consume. Most of them avoid eating until the afternoon to give their stomachs a break during the day.

ASMR (an autonomous sensory meridian response that can be triggered by certain sounds or sights) is often a huge part of these videos. The idea is to create audio that makes listeners feel as if they are in the same room as the host.

The familiar sounds of eating — slurping and chewing — and the imagery of mukbang videos supposedly trigger ASMR for many viewers.

Mukbang is controversial for many reasons, from how much food it wastes to how it can promote unhealthy eating habits. In 2020, China banned thousands of mukbang accounts and their videos as part of a campaign against food waste. 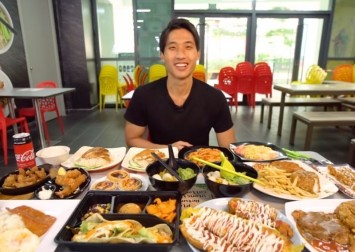 Saravana Kumar, an Indian medical student in the US, started his YouTube channel YourEverydayFoodie in 2017 and he has eaten everything from raw honeycomb to aloe vera.

One video features him crunching through pani puri — an Indian street food snack of hollow dough balls stuffed with potatoes and tangy tamarind water. He has 22,500 followers, with posts that largely feature Indian and Ethiopian cuisine.

"From when I was young, I have been interested in trying new types of food and cuisine," he says. "My family and I would always watch cooking shows on television. I came across mukbang videos one day and I was hooked."

Mukbang YouTubers make money through ad revenue and sponsorships. "It's not easy work, as it takes a lot of time and effort to build up a following and sustain interest in your content," says Verma. Many receive hate comments, body shaming and criticism but, for most mukbangers, it's their passion for food which keeps them going.

"The future for mukbangs and ASMR is immense! Especially in India," Saravana Kumar says. "Not only my Indian viewers, but viewers all over the globe, [who] really enjoy watching different types of cuisine."