Yoga instructor Fiona Callanan is a tsunami survivor, a lawyer and a mum.

Fiona Callanan remembers one of her initial, visceral thoughts after surviving the 2004 Indian Ocean earthquake and tsunami was actually a positive one.

On the Thai island of Krabi on Boxing Day with her boyfriend, she was getting ready for a day of kayaking and had docked on a small beach close to a cliff. Callanan said she heard people shouting to run, but was unclear of the actual danger until it was too late.

“And then the wave hit and you realise how serious it is,” said the 44-year-old, who was 27 at the time. “And I just found myself on the ground tumbling around, and then the next thing I remember, I think I must have lost consciousness, because I came to, and I was just buried in mangrove roots.”

Callanan said she was in shock and couldn’t feel any pain at that point, adrenaline still pumping through her veins. A woman tried to help dig her out, but had to leave to find her missing baby. Luckily, her boyfriend found her soon afterwards.

“He pulled me out and we had a look at my leg and it was basically hanging off. The bone was snapped in two and you could see the flesh and the ants crawling around it. It was an odd experience because you don’t think you’re ever going to see something like that when it’s your own body.”

Callanan’s resiliency surfaced quickly. She found herself drawing positives from what was a traumatic event that ended up claiming the lives of 227,898 people, one of the deadliest natural disasters in recorded history.

“I thought to myself, ‘Heather Mills has a prosthetic leg and she’s fine, so I will be fine’.”

She said the resounding thought, some 17 years later is one of appreciation that her leg was all she lost that day.

“When I say we were lucky, we really were.”

Rehabilitation was filled with ups and downs, points where Callanan said she felt down and out, and lighthearted moments where friends had to give her a piggyback out of a London pub because she’d had one too many drinks and was not able to use her crutches properly.

Callanan said there was no impactful moment of reflection where she fully came to terms with her situation and being a below-the-knee amputee, but a slow sea change did eventually take place over time.

“It was kind of gradual, I think it’s kind of like anything when it comes to your health or wellness, it’s a process. And I think it’s only from looking back you realise how much you thought you couldn’t do at the time.”

One thing she did not let the tsunami take from her was her career. Callanan was actually on a work trip in 2004 for the law firm that hired her out of school, and after she had recovered in hospital it was back to work at the same firm within months.

Read Also
Handstands – their health and fitness benefits for you, from improved core strength to inner peace 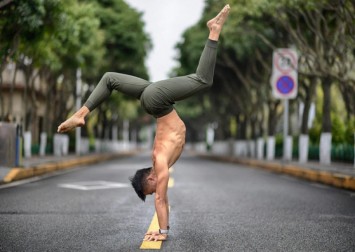 A decade later, while working as a lawyer in Hong Kong while her second child, a daughter, was just five weeks old, Callanan attended a yoga class at Pure in Central. She said she originally started going once a week, but soon the benefits of the ancient discipline were too strong to ignore in a city that is not built for anyone with a physical disability.

“I just remember feeling better after every class and pretty soon it just turned into an everyday thing. The game-changer was I was going to the Centrium and I could never really walk up stairs. If it was a good day and I was in trainers I might be able to do it, but if I was in high heels there was no chance.”

Then after a few months of consistent classes, Callanan said there was a moment she won’t forget.

“I just remember walking up those steps, foot over foot. Then in the changing room after a class, I could never put my trousers on unless I was sitting down on a bench because my right left just wasn’t strong enough, and nothing I was doing was making it stronger. And then I just found myself standing on my right leg as I was putting my trousers on.”

Now a teacher at Pure, on top of still working full-time as a lawyer at McKinsey & Company, Callanan said there is a level of perspective she has gained from the tsunami and its impact on her life. She said she “likes being busy”, made peace with what has happened, moved on, but isn’t ignoring the fact she went through a monumental period of time.

When asked if there is a phrase she keeps going back to after all these years, Callanan said there is one that is short and right to the point.

“I’ve been through a lot of challenges in my life and there have been many, many times where I felt like I can’t overcome the obstacle that has been presented in front of me. But when I have those moments, the thing that has kept me going is the knowledge that if I just keep going, I’ll be able to get through it.”