Anxious over everyday social situations? How VR can help

VR technology is being trialled to help people overcome social situations by simulating everyday events like shopping, as shown in this image.

Virtual reality (VR) technology allows a user to enter simulations of real-world situations or completely imaginary environments with ease. Once the reserve of specialist research labs, it is now much more accessible and presents numerous possible applications, not least of all for health care.

“VR has extraordinary potential to help people overcome mental health problems because it gets to the heart of successful treatment: making people feel better in everyday life,” says Daniel Freeman, professor of clinical psychology at Oxford University in the UK, who pioneered the use of VR to assess and treat paranoia.

In VR, people can repeatedly enter simulations of the everyday situations that trouble them and be guided in the best ways to think, feel and behave. The conscious awareness that these are simulations allows people to try things that they would be wary of in real life, but the learning leads to major benefits in day-to-day activities.

“The potential is that VR treatment can be faster, more powerful and have a greater appeal for patients than traditional mental health approaches,” says Freeman, who has led work designing and testing new automated VR psychological therapies for mental health disorders.

When a team at the Chinese University of Hong Kong (CUHK) met with Freeman and insurers AXA Hong Kong, they came up with a plan to trial VR to support working adults with severe anxious social avoidance.

“We saw a possible benefit for people in the workforce who experience difficulty in public speaking [and] interacting with clients,” says Winnie Mak, a professor in CUHK’s department of psychology. “Daniel Freeman designed it for people with psychotic disorders; we wanted to create a VR intervention for people in normal social situations.”

Early findings from this “Yes I Can” initiative, which began as a pilot scheme in early 2020, found that participants reported feeling less anxious when making social interactions and felt less impaired by their social avoidance symptoms. 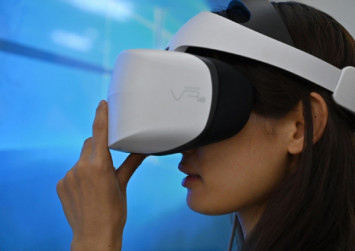 One participant said the therapy helped reduce nervousness in real-life situations: “I realised that maybe daily life is similar to that in VR training. This somehow reduces my nervousness. I now can plan to buy clothes by myself which I had never done before.”

The trial is now being opened up to the wider population. Participants will receive three VR sessions each and a site has been set up in a co-working space in Admiralty to make it easy to access the treatment.

In Hong Kong, one in eight adults (13.3 per cent of the population) suffers from a common mental disorder – namely anxiety, depression or a combination of the two – according to a 2015 study funded by the Food and Health Bureau, yet only a quarter of the individuals ever seek help due to stigma, access and costs.

“Social avoidance is quite common [among people with common mental disorders],” Mak says. “They are concerned about how people might think about them or evaluate them, so they avoid social situations or public places, for example making an order in a cafe or calling out for a mini bus to stop.”

The CUHK research team has spent the last year working with the Oxford team to localise and contextualise the programme to make it better suited to Hong Kong.

“In the initial [UK] version, the roads were quite spacious and there were not that many people in the cafe, which is not that anxiety-provoking for Hong Kong citizens,” Mak says. “We’ve worked with the Oxford team to make the streets more crowded, to create more noise and hustle and bustle in the cafe, so more tension.” 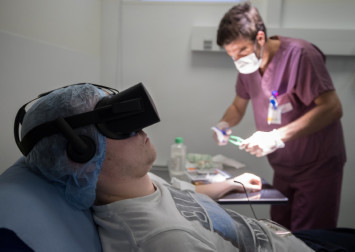 VR has been used for more than 20 years to treat mental health problems, but access to the treatment was restricted as there were too few skilled therapists using it as an aid to meet demand. Freeman’s technology uses a virtual therapist: a friendly computer-generated avatar, voiced by a real person, who guides the patient through the therapeutic work.

“The automation of treatment has the potential to revolutionise the provision of help for people with mental health difficulties,” Freeman says. “It’s increasingly recognised that mental health problems affect a very large number of people, but there are too few skilled psychological therapists to provide the best treatments.”

Addressing the social stigma that surrounds mental health issues in Hong Kong is key, Mak says. Many people are reluctant to talk about their challenges because they are worried that others might think they are crazy or that, for example, they might be passed over for promotion in their job.

She hopes that the trial and the development of effective VR technology will make for an affordable and accessible treatment.

Other advantages of VR treatment include avoiding the awkwardness people might feel about sharing their problems with a real-life therapist, and in terms of treatment for anxious social avoidance, the potential to achieve results faster.

“In standard face-to-face therapy there can be the problem of too much time talking in a room without going out and making the necessary change in day-to-day life,” Freeman says. “VR therapy is all about making change in day-to-day life, and this can be done in a carefully controlled graded way.” Instead of weekly sessions, clients can have daily VR treatment sessions, he adds.

But VR treatments will not do therapists out of job. Freeman sees a demand for more, not fewer, skilled therapists who can assess, understand and treat mental health problems. He sees the two working together successfully in the future.

“If automated VR treatments demonstrate their potential in clinical trials, then the sensible clinician should welcome them as a valuable help in their clinic for successfully treating greater numbers of people,” Freeman says.

The research team is seeking new participants who struggle in everyday social situations to take part in the trial. For more information on how to register and eligibility, visit the AXA Hong Kong website .