Breast cancer survivor: 'You also have to heal your mind'

A photo of breast cancer survivor Isabel Galiano in Koh Samui in November 2017 taken by friends who always make her laugh. Surround yourself with friends who make you laugh – it is truly therapeutic, she says.

“You can’t just heal the body, you also have to heal your mind,” says the 46-year-old, who became a health coach specialising in supporting cancer patients after beating the disease a decade ago.

She is convinced her lifestyle played a role in her illness.

“I never smoked. I barely drank … I ate healthily. I was always thin,” she says.

“But lifestyle isn’t only about [physical health]. How about the emotional aspects? Often the latter is completely underestimated and not addressed at all.”

In 2006, Galiano was honeymooning on a beach in Mexico with her banker husband when she felt a lump on her right breast as she applied after-sun lotion.

“I felt this cold shiver go through my body and instinctively I knew to take this seriously,” recalls the Luxembourg native, who was then a 32-year-old CEO of a radio station. She booked an appointment with her doctor the next day.

Back in Luxembourg, a flurry of tests including a mammogram and a biopsy revealed stage two breast cancer.

According to the World Health Organisation, breast cancer is the most common type of cancer to afflict women globally, affecting 2.1 million each year.

In Hong Kong, the disease is the most common cancer in women, usually striking in their fifties.

This wasn’t Galiano’s first brush with cancer. Five years earlier, her mother suffered colon cancer and succumbed to the illness at age 53.

As her mother’s carer during the three-year ordeal, Galiano handled it in “autopilot” mode.

“I never allowed myself to be vulnerable, to even cry. I thought: ‘Let’s keep moving on and get things done,’” she says.

Read Also
Don't wait: 36-year-old cervical cancer survivor shares how a simple check-up turned out to be a blessing in disguise 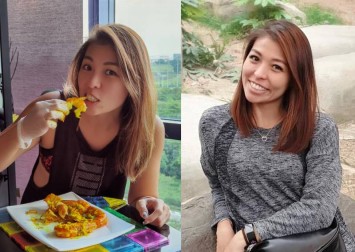 Galiano toiled at work at the same time, getting just three or four hours rest on many nights.

“I had no idea sleep deprivation affects health,” she admits.

After a lumpectomy to remove the growth from her breast, followed by chemotherapy, radiotherapy and hormone therapy, Galiano seemed to have the cancer in check.

She and her husband relocated to Singapore when he landed a new job there. She found an oncologist and continued her hormone therapy. In 2008, her tests revealed no cause for alarm.

She was ready to start a family. But first, her new oncologist wanted to be absolutely sure she was clear of cancer and ordered tests.

A scan revealed a 6mm growth in the same breast, and a biopsy confirmed that the cancer had returned.

This revelation shook Galiano and prompted a rethink about her health.

She realised she had long neglected her own well-being: she had not addressed her inner turmoil as a carer for her mother and only focused on her physical health, ensuring she did not miss any check-ups or treatment sessions.

“I thought: what else can I do to put my mind and body in the best position to heal and stay healthy?” she says. 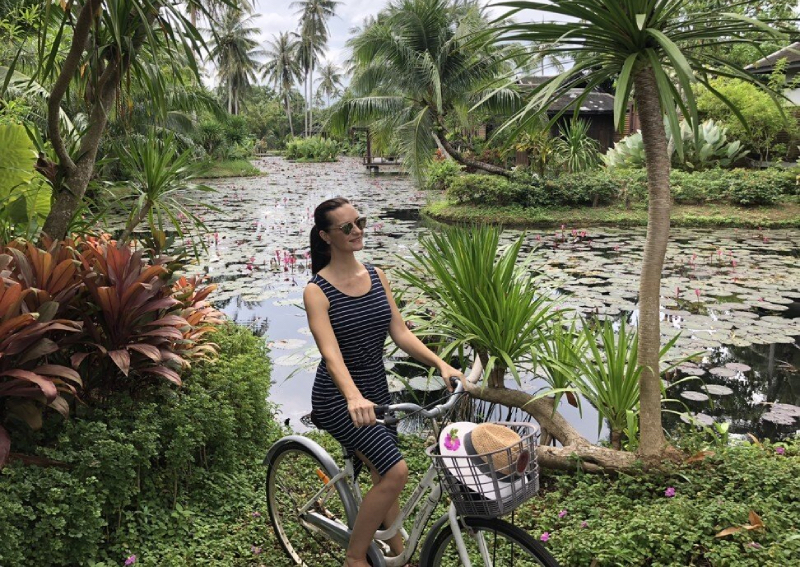 Galiano, a fan of nature and the outdoors, in Phuket, Thailand, in 2018. PHOTO: Isabel Galiano

On the body front, a genetic test revealed she wasn’t a BRCA1 or BRCA 2 mutation carrier, so she had only a single mastectomy.

Those who do have these mutations are more likely to later develop a second cancer, either in the same or the opposite breast. Because of this, they may opt for a double mastectomy.

She also underwent targeted therapy that uses drugs that block the growth of breast cancer cells in specific ways.

To heal her mind, she adopted several practices to alleviate stress and negative emotions that helped her sleep better and boosted her immune system, which is vital in fighting disease.

A fan of yoga, Galiano decided to become an instructor.

“I felt I needed to find [activities] good for the body and mind,” she says.

After training in different yoga styles, and attending a course at Vyasa Yoga Singapore, she learned other ways to soothe her mind, including breathing techniques. 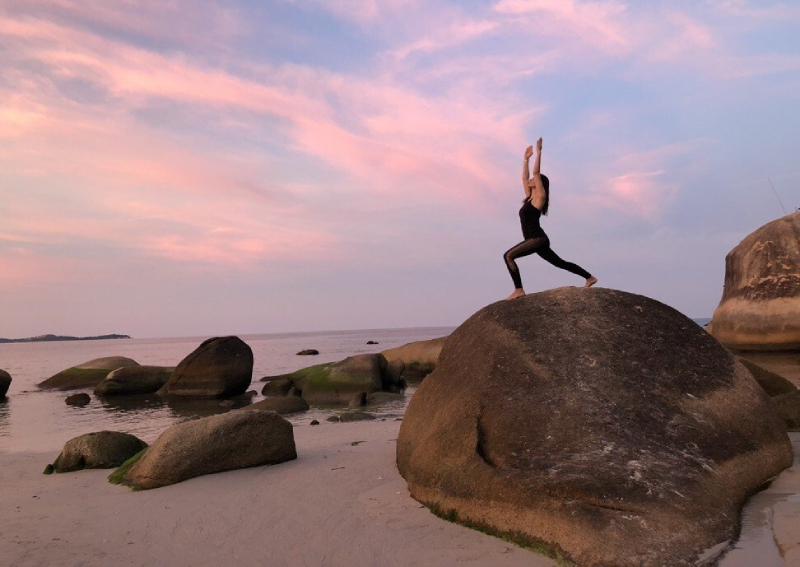 A walk in nature, often in Singapore’s Botanic Gardens, is part of her morning ritual, followed by meditation involving deep abdominal breathing to relax and then to set her intention for the day.

She gets an alert on her smartphone three times a day to remind her to focus on her breath.

“Wherever I am, I take a few breaths and become conscious of my breathing … to relax and get grounded,” she says.

Sleep is now a top priority , and she nets eight hours of rest daily.

Her recovery prompted her to use her experience positively to help other cancer patients.

She gained certification as a nutrition and health coach from the Institute of Integrative Nutrition, a US online school headquartered in New York, and as a functional medicine practitioner from the US Institute for Functional Medicine based in Washington.

Functional medicine examines the ways diet and nutrition, environmental toxins, and lifestyle choices affect the development of chronic diseases, and how to help patients make positive changes for better health.

Fighting cancer requires more than addressing the physical health aspects of the disease. 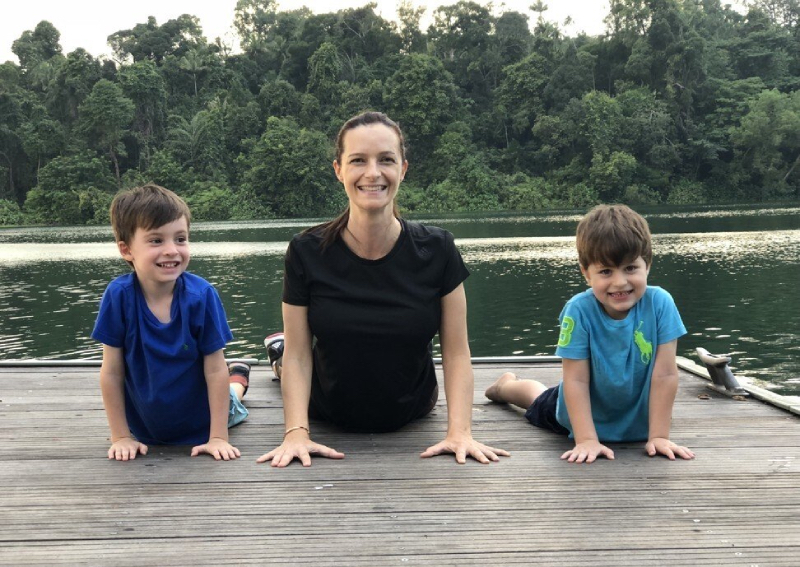 Galiano in Singapore at MacRitchie Reservoir in 2018 with her now six-year-old (right) and eight-year-old (left) sons. PHOTO: Isabel Galiano

Galiano offers holistic services that don’t replace medical treatments but complement them, to aid patients in their journey back to wellness. That could be teaching them how to get better sleep, eat well or manage stress.

She supports them by being a good listener, offering “a safe haven to talk about their emotions” to let patients air their fears and anxieties.

She advises carers who may be neglecting their own health and well-being to create a space to care for themselves and to express their emotions.

“Plan your ‘me time’. Schedule a time for the gym, meet friends to talk … or whatever your way is to disconnect from the situation and [recharge physically and emotionally],” she says.

Throughout her own cancer treatment and recovery, her husband was her rock.

“When you go through physical changes like losing hair everywhere, having someone look at you in the same way as before the cancer … it’s very comforting,” she says.

“That’s the best support you can get.”