Bull racing returns to Bali, and with it a whiff of normality after Covid-19

In Bali, in Indonesia, there is hope that life can finally return to normal after Covid-19 - the bull races have returned.

The sun is still rising as Gidday Sudita drives out of his family compound on a beach in Bali’s far west, towards a plateau of mustard-yellow rice fields.

It’s September and the air is tainted with smoke and embers as farmers burn off the crop residue in their fields, as they always do at this time of the year.

But there’s something else in the air, something that’s been absent in Bali since the start of the pandemic: A faint whiff of hope that the virus, which has hammered the island’s tourism-based economy and taken nearly 4,000 lives, is receding and life can finally return to normal.

For millions of globetrotters with fond memories of holidaying on the so-called Island of the Gods, that hope will be realised when they are able to return, but for the agrarian communities in this little-visited corner so many worlds away from the usual tourist hang-outs in the south, that day is today – the makepung, or bull races, have returned to Bali.

Introduced by migrants from Madura, an island off the northeast coast of Java, and adapted with locally made chariots cut out of a Roman biopic, bull races give hardworking people here a way to blow off steam and celebrate the end of the rice harvest.

The racing season, which normally lasts from July to November, was cancelled last year, to stymie the spread of Covid-19.

This year’s season had also been canned but was given a last-minute reprieve after infection rates in Bali tumbled and social-distancing restrictions were eased.

This year’s season will consist of a mere two race meets, though – the second on Oct 17 – instead of the usual 13, and a maximum of only 20 chariots have been permitted at each meet, whereas previously up to 150 competed.

But nothing is lacking trackside, where beasts weighing half a tonne tear around muddy circuits lined with hundreds of spectators, and not so much as barrier tape to separate them.

“I have never seen anyone die but broken arms, broken legs, are normal,” says Gidday, a retired jockey and owner of the reigning champion of 2019.

“The organisers always tell people not to stand too close but they just don’t listen – they want the best view. Safety is not big here.”

On Madura Island, bull racing takes place on a rectangular patch of dirt where a pair of animals pull a jockey mounted on a wooden plough over a distance of 100 metres in as little as nine seconds.

With so much at stake, pre-race preparations are fastidious.

Bulls are force-fed concoctions of honey, rice wine, coffee, energy drinks and up to 100 eggs a day, while local shamans are called to bestow bulls with magical powers – and place curses on competitors.

A great deal of cruelty goes into making the bulls of Madura run. Their hides are sliced with razor blades and salt rubbed into the wound.

Hot ointment is rubbed into the creatures’ eyes and anuses. And they are beaten and whipped relentlessly so as to be driven into a frenzy the moment they are released.

In Bali, the sport is less about winning and money, and more about pride and prestige.

The bulls pull hand-carved wooden chariots with thin tin-metal sheets lining the wheels and race, two teams at a time, around a 2km circuit. To mitigate collisions, the teams are set 10 metres apart at the start of each race.

If one team has narrowed or increased the gap between the other at the finish line, they win and progress to the next round. Overtaking is possible, but rare, and amplifies the risk for jockeys and spectators alike.

The ground shakes as the bulls tear around bends at up to 60km/h, the jockeys’ faces contorted as they hang on for dear life.

“It’s natural for jockeys to feel scared at the start of the race but once they start the adrenaline hits and they feel high,” Gidday says of his days in the driver’s seat when he was a younger – and thinner – man.

“The most important thing is to stay in the cart until the bull stops because if a jockey panics and jumps, that can be really dangerous.”

In Madura, the jockeys are children. In Bali, only adults are allowed to race but there is also an element of cruelty to the sport.

Jockeys use clubs embedded with metal spikes instead of whips that rupture the beasts’ skin, creating rivulets of blood. 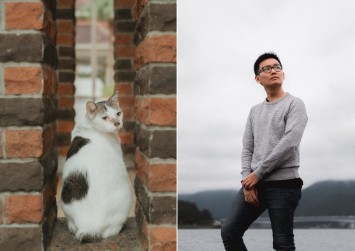 Some overeager members of the crowd also try to give the animals a whack, running perilously alongside charging chariots with a piece of four-by-four or fallen branch in their hands.

“I know some people overseas must look at us and think that it is bad,” Gidday says.

“But I ask you to understand this is part of our culture, something we pass on to children from generation to generation. It is unique. It cannot end. And the bullfights in Spain are much crueller, they kill the bulls. A bull never died racing in Bali.

“Farmers take care of their bulls after the race,” he adds.

“They spend hours rubbing the wounds with the juice of baby bananas to cure their skin and if there is an infection, they will use all their money to pay for a veterinary surgeon.

“Hitting the bulls is the only way to make them run. We have tried doing it without the nails, but it was worse because the blood could not come out and caused lots of swelling.”

In the final heat, Gidday’s team, carrying a red flag at the front, increases the distance between the team in the rear, carrying a green flag, by three metres.

He gets a few pats on the back from spectators and friends as the crowd begins to dissipate.

There’s no ceremony, no prize, not even as much as an announcement, only the promise, so long as the pandemic in Bali continues on its downward trajectory, of another meet in a rice field, when the bulls of west Bali race again.