As Cambodia courts tourists, other archaeological treasures are lost

Newly-built houses sit on top of the former archeological site, at Srok Chek near Phnom Penh in Cambodia. Ancient sites across the country are under threat from developers.

When archeologists arrived in the village of Srok Chek — which is within sight of the Cambodian capital, Phnom Penh — more than 20 years ago, they sought help in excavating parts of the strange circular area that encased the community's dry season rice fields.

Ek Dara (not his real name) was eager to assist; not only did he want to learn more about what had long confused him and his fellow villagers, but the small income would supplement his subsistence existence as a fisherman and farmer.

"We found old pots, pottery and other items that [the archeologists] took with them to the National Museum [in Phnom Penh]," says Ek Dara, who fears his comments would have negative consequences for his family if he were to use his real name.

Radiocarbon analysis of the items dated the site to around 100BC, yet it appears to have been neglected until the 1990s.

Now, however, the whole area is disappearing under a housing project. The farmland is buried under metres of river sand, the first step in the preparation of land for construction in Cambodia. Half of what remained of the circular village is already a building site, rows of identical detached houses now occupying what was the main source of sustenance and income for the villagers.

"[Developer] Chip Mong's work is not good, we tried to keep [the land], but they continued to construct anyway," says Chhay Poy, the 74-year-old chief of Srok Chek.

Although agents had bought some plots, signs barring villagers from the land were the first hard evidence of what was to come. It was the first time since Chhay Poy had moved to Srok Chek, in 1979, that the land had been off limits to him and his neighbours.

The ancient site — known as the Choeung Ek Circle — is the largest of some 30 known circular villages that have survived the centuries in Cambodia. There are 15 others across the border, in Vietnam. In 2010, a circular village site in nearby Kampong Cham province was similarly destroyed, as housing for rubber plantation workers was expanded.

While the Unesco World Heritage Sites of Angkor Wat, Sambor Prei Kuk and Preah Vihear receive global attention as tourist destinations and lavish grants from international donors for preservation, and prompt pride among Cambodians for their architectural splendour, the fate of lesser-known sites is precarious.

Nevertheless, the destruction of historical buildings and sites became such an issue — and raised such a public outcry on social media — that in October 2021, Prime Minister Hun Sen recommended that "the cultural, historical, ancient and heritage buildings currently under demolition be stopped so that they will be preserved", the Phnom Penh Post reported. 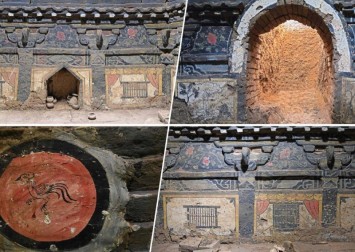 "Cambodia has a long-standing record for its efforts on cultural conservation, and [these recommendations] will further strengthen the balance between urban growth and sustainable development, and … promote the universal respect for cultural rights for all through the restoration and preservation of cultural heritage," noted the Unesco Cambodia office in a press release at the time.

Such messaging appears not to have reached the Ministry of Culture and Fine Arts, whose placement posts demarcating the historical site in Srok Chek are still visible but are just as threatened as the site itself, with some submerged in sand. Others have already been removed.

Ministry spokesperson Long Bonasereivat said he had no knowledge about the site in question, and declined to comment on why the ministry was allowing a recorded archaeological site to be destroyed.

"Cambodia has done an impeccable job of preserving its cultural heritage around the temples of Angkor, but Phnom Penh is often overlooked in the scramble for development," says Lonely Planet Cambodia writer Nick Ray.

"The capital has some impressive cultural assets in the shape of the Royal Palace, National Museum and Wat Phnom, but emerging new archaeological sites would help to diversify the offer. As the tourism sector in Cambodia seeks to recover from the sucker punch that has been Covid-19, it will need some new attractions to help entice visitors back to the capital and stay a little longer."

The Ministry of Tourism has reported that foreign tourist arrivals were down by more than 90 per cent in the first half of 2021, and the impact that has had on tour guides, drivers, hotels and hospitality has been significant.

Having lost not only a potential tourism site, the villagers of Srok Chek are also being cut off from their "killing field".

Just 500 metres north of the circular village lies the well-visited Choeung Ek Genocide Memorial. The filled-in Khmer Rouge burial pits resemble a gently undulating lawn and it's possible to sit on a bench beside a small tree-shaded lake to quietly reflect.

Skulls and bones have been interred in a large glass-sided stupa, out of respect for the dead but also as a visual representation of the horror visited on Cambodia in the 1970s. This oasis of contemplation has been isolated by the building work and is now surrounded by malls and identikit housing projects.

The impact on the daily lives of Srok Chek's residents is more profound still.

"This construction is affecting the livelihoods of my family and the other local people," explains Ek Dara, standing on the steps of his stilted wooden house, looking out over what was once important agricultural land, now buried in sand. "I am sad, as this ancient site should be protected for the next generation, but instead we don't have the ability to resist and safeguard what we have."