Can 'superman' Li Ka-shing save the planet with 'edible plastic'?

Horizons Ventures, the private investment arm of Hong Kong’s best-known billionaire, Li Ka-shing, said its investments in sustainability projects from “edible plastic” to fake leather and plant-based chicken nuggets are ready to be scaled up to production level and help save the planet.

The company will co-operate with entrepreneurs in Hong Kong to enhance their competitiveness in a fast-changing world, according to Solina Chau Hoi-shuen, a prominent businesswoman and close friend of Li.

“No scale, no impact,” Chau said during a presentation to media and guests about Horizons’ synthetic biology portfolio on Monday (Oct 25).

She is a co-founder of Horizons Ventures, which focuses on investing in disruptive technology start-ups.

It was set up in 2002 to generate financial returns for Li’s philanthropic endeavour, the Li Ka Shing Foundation. Li has been dubbed “superman” for his deal-making prowess over the decades.

“The investments we introduced today are ready to scale to production. [Then] they can make an impact on society,” said Chau.

Horizons invested in the Series A fundraising of Notpla, a London-based packaging start-up in September. Notpla develops sustainable materials from seaweed and other plants.

Its most popular product, called Ooho, is an edible, flavourless and biodegradable membrane made from seaweed that can be used to contain water and other liquids in a small “bubble”.

It was used in the 2019 edition of the London Marathon to quench the thirst of runners without the need for plastic bottles.

Notpla also produces compostable seaweed food-takeaway boxes as an alternative to plastic ones. Plastic pollution has become one of the most pressing issues facing the planet.

Notpla is looking to sell its products on a commercial scale, according to Horizons.

Other investments have included Erthos, which produces hard, single-use plastics that are 100 per cent compostable, as well as lab-grown leather company Modern Meadow, an American biotech firm. 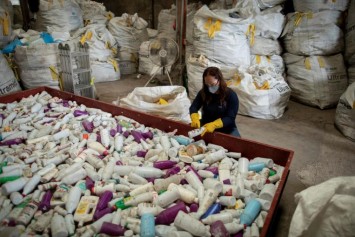 Modern Meadow provides biofabricated leather materials intended to offer an animal-free textile made from living cells. It plans to launch its products in Hong Kong and China on March 8 next year.

“We invested in synthetic biology projects because we believe that will be a very important technological innovation that will affect our future, “ said Chau.

“That is why Mr Li thinks that Hong Kong must be ‘reindustrialized,” she said, referring to a new wave of industrialisation in which the focus switches to technologies like synthetic biology.

Earlier this year Perfect Day, an American food technology company backed by Horizons, partnered with a Hong Kong ice cream maker to launch an animal-free dairy variety of the dessert, the first time such a product had been launched in Asia.

“Whenever and wherever, we will do our best to support – as with Ice Age! – we will ensure there is no economic risk. We will support everyone to try and give Hong Kong companies a unique competitiveness,” said Chau.

Hong Kong’s government is putting its weight behind the city’s development as a technology hub, including the expansion of the existing science park at Pak Shek Kok with an additional 88 hectares of land by resurrecting a reclamation plan, according to an announcement by Chief Executive Carrie Lam Cheng Yuet Ngok in her recent policy address.

Chau refused to comment on the government’s strategy but said innovation is the key, rather than land, for technological development. How the government supports local companies is important, she added.