It seems to have passed by largely unnoticed, for obvious reasons, but 2021 was the European Year of Rail, an initiative intended to promote trains as a relatively sustainable form of travel and reintroduce them to the youth, who in recent decades have instead taken to the skies with Europe's innumerable budget airlines.

Once, during the long university holidays, the continent's lumbering overnight trains were packed with under-26s clutching Interrail or Eurail passes. They overflowed from the compartments of unreserved coaches to line the corridors in their sleeping bags.

In the summer of 1977, I was among their number, a little blue-and-white paper passbook offering month-long rail travel stashed sweatily with dampening passport and travellers' cheques in a grubby cotton money belt under my denim shirt.

The overnight trains were a means of saving on dormitory and guest-house expenditure, and a friend and I kept other costs down by living on snacks assembled in supermarkets, even if a lack of language skills sometimes led to purchases that were inedible.

We went all the way down to Sicily, in Italy, just because we could. We went to Budapest, in Hungary, because my friend wanted cheap chocolate cake at the elegant Gerbeaud Kavehaz.

We travelled almost as far north as trains go, to Sweden's Kiruna, above the Arctic Circle, because we'd met some Swedish girls on the sleeper train from Paris to Rome and decided to accept their invitation to visit.

Today, Eurail passes are available to all ages, and in many varieties, and are mostly used in the form of an app. Overnight journeys have largely been replaced by daytime high-speed trains that routinely reach 300km/h. 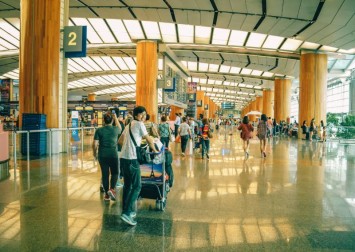 But it is still possible to spend a month criss-crossing Europe on a whim, and although my sleeping-bag days are gone, and my desire for a diet of day-old pizza from greasy paper bags long vanished, I thought I'd give Eurail another try.

But this time it would be less about trains, and more about culture and creature comforts.

I begin in Barcelona, Spain, alternately walking off jet lag in the warren of ancient streets and lounging in the Mandarin Oriental, an intelligent conversion of a dignified former bank building conveniently close to most of what I want to see, and only a few metro stops from the main railway station.

I take a comfortable chair on my large balcony with views across the city's roofscape, open the Eurail pass on my phone, scrutinise the timetables, and begin to decide where to go first.

The 33 countries usually available are in practical terms reduced to the 17 whose Covid-19 regulations for non-European Union citizens are manageable, but that still leaves a near-infinite choice of routes to reach a departing flight from Amsterdam in a month's time.

Once free of the suburbs, my first sleek train swiftly accelerates, and during the merely three-hour journey southwest to Madrid I remain absorbed in the scenery — orderly farmland, wild hillsides and castle-topped promontories.

At the Mandarin Oriental Ritz, the door of my room closes with a satisfying solidity to shut out the bustle of the Spanish capital. The contents of my suitcase are whisked away for rehabilitation by housekeeping, and it is tempting not to emerge at all. But word has reached the concierge that I want to visit the city's famous galleries, and tickets soon materialise for three of them, all within walking distance.

At the Prado Museum, the windows behind beatified figures in assorted Renaissance religious scenes give views to distant hilltop castles just as seen from the train. And at the Thyssen-Bornemisza Museum, Canaletto's broad canvases of Venice's St Mark's Square and Grand Canal suggest a future destination.

Between the nine courses with champagne pairings of a tasting menu in the hotel's champagne bar, about as far from my 1977 diet as it is possible to get, I search the app's timetables and decide on Nimes next, not far round the Mediterranean coast into France.

I miss the arcana of the Thomas Cook European Rail Timetable, printed on rapidly dog-eared tissue-thin paper. This required hours of study, swapping from table to table and checking foot­notes, especially for international connec­tions where trains were split up en route. Redundant pages were put to other uses in emergencies, the Nile steamers going first. But there is no denying the convenience of in-app searches.

In Nimes, I stay at the historic L'Imperator, its long-standing railway connections reflected in occasional wheel motifs in the decor commemorating the first luxurious European sleeper trains run by Wagons-Lits, the original operator of the Orient Express.

Through a corner doorway in Nimes' labyrinth of limestone terraces is a compact and discreet lobby leading to a tucked-away leafy private courtyard, overlooking which is my suite, in a building at the back.

Much time in Nimes is spent sitting in cafes admiring the 2,000-year-old but still intact Maison Carree, the pillared centrepiece of the city, and visiting the arena, a colosseum on the scale of Rome's, but with a fraction of the visitors.

I pause in Marseilles for a few days of wandering and for the PCR test required by Italy. In general, Covid-19 passes are checked either at the entrance to the platform or on board, at the same time as a scan of the Eurail app's QR code and reservations. Masks are required, and on Italian trains supplied, and the relative spaciousness of train interiors is welcome.

I have learned by now that in the time spent lining up for reservations, the average European express can travel about 200km (120 miles), so my first action on arrival in Turin is to book every single train I want to take in Italy, although this removes some of the spontaneity.

In the 1970s, we developed skills to avoid paying a reservation fee, discovering the right platform before it was announced, getting on board before the train officially opened, and securing an unreserved compartment before the scrum of other backpackers arrived.

In theory, we wrote in the "from" and "to" boxes on a fresh line in the passbook, and had that stamped at the ticket office before boarding, but in fact we would fumble for a pen after being awoken by a conductor on board. It is now possible to book some trains through the app itself, although there is a small service charge on top of the railway reservation fee.

I've long wanted to visit the famous former Fiat factory, with its rooftop test track, as seen in The Italian Job (1969). In the 1980s, architect Renzo Piano converted it into shopping, hotels and assorted other entertainments, including a museum displaying Fiat magnate Gianni Agnelli's art collection and another with historic cars.

So I stay inside the building, at the DoubleTree by Hilton Turin Lingotto, which retains a whiff of the industrial in its enormous public spaces and the vanishingly high ceilings in its rooms. High-speed Frecciarossa trains can be seen below, in sidings once used to load up newly manufactured vehicles.

Elsewhere, I wander through the colonnaded squares that were the subjects of the disquieting paintings by Giorgio de Chirico that stimulated the surrealists, and revel in the antique furnishings and interior decor at the Museo Accorsi-Ometto, a former monastery. The city is full of surprises, including the world's oldest and possibly finest Egyptian Museum, and the former palace of the kings of Italy.

This region was the origin of the slow food movement, and evenings are spent in Eataly, across the road from the hotel, a vast market and restaurant complex specialising in local produce. Giu da Guido, a restaurant inside the largest wine store in Turin from which any wine might be purchased by the glass, offers meals of simple honesty, from freshly made pasta to Fior di Latte ice cream.

A single day in Florence is spent mostly with Botticelli and contemporaries in the unrivalled Uffizi Gallery, and much time in Rome at the Vatican Museum, before I continue to Venice, slow down and temporarily abandon the railways for wallowing vaporetti (water buses).

I have memories of staying in a convent dormitory in the '70s, but this time choose the Ausonia Hungaria, on the Lido, with close links to the Venice Film Festival. Its rippling five-storey frontage of 1913 is covered in majolica tiles with images of fruits, flowers and female figures, while the recently modernised interior is quirkily '60s in style. Not only do the stars take over the hotel during the festival, but pictures of them line the walls.

As always, there is also much pleasure to be found simply in walking across Venice away from the main arteries, and admiring the acres of ornate mansions paddling in the lagoon.

I shoot between Geneva, Paris and Amsterdam as I feel like it, much as in the '70s, only once finding a train that is sold out. But there is one major difference.

I don't meet any Swedish girls. Not even Greta Thunberg.

READ ALSO: 10 mouthwatering French pastries you've probably never tried, but really should if you a have sweet tooth