Queues formed outside Hong Kong bakery Hoover Cake Shop in Kowloon City after it announced on Sept 17 that it would close on Oct 1.

At the eleventh hour, Hong Kong bakery Hoover Cake Shop in Kowloon City has been given a stay of execution.

Originally slated to shut down permanently on Oct 1 after nearly 50 years in business, the bakery will now be relaunched under the stewardship of The Academics Group in 2023.

However, it will no longer be on the corner of Nga Tsin Wai Road and Fuk Lo Tsun Road in Kowloon City, where it has stood since 1974, gaining long-time regular customers such as the actor Chow Yun-fat.

Instead, the new owners are seeking a new location, with Hong Kong International Airport being floated as one idea, says Jennifer Liu Wai-fun, the founder and chairman of The Academics Group.

The shift in ownership was cemented on Sept 29 when Liu signed a contract with the Chow family to take over the business.

Open since 1977, the tiny bakery is known for its flaky puff pastry egg tarts and traditional baked goods, such as Swiss rolls and walnut cakes.

An outpouring of grief manifested and lengthy queues formed around the block after the owners, Chow Ping-kuan and his wife (who prefers to be known as Mrs Chow), announced on Sept 18 that they would close the business, citing their old age and the fact that their children were not interested in taking over the business.

Liu's company, established in 2012, was one of the first speciality coffee purveyors in Hong Kong with a mass market presence, and has since expanded to multiple Southeast Asian markets, including Singapore and Thailand.

Under its new ownership, the bakery will be renamed Hong Kong Hoover Cake Shop 1977 and will reopen in the first quarter of 2023, according to Liu.

In the interim, they plan to release some bakery products through an online platform.

Speaking from Hoover Cake Shop on Friday (Sept 30) evening, where she was helping the Chow family close up shop, Liu says the location has a lot of sentimental value but ultimately it would prove difficult to stay in the same place as they look to recruit a new generation of bakers to carry on the Hoover legacy.

"Not a lot of people are willing to work in small spaces like that, so I have a lot of respect for the original founders," says Liu, pointing out that the bakers only had about half the shop's roughly 250 square feet (23 square metres) to work in.

"The decision is that we will look for a new location and [as for] Mr Chow, his recipes will be passed down."

Liu says long-time baker Hui Fu, better known as Fu Gor, will be taking a short break before returning to work with the group on training bakers and developing new recipes with "flavours that are on trend for today's palate".

Liu says that the idea of relocating to a store in the city's airport was based on Mrs Chow's fondness for the old Kai Tak Airport, located a short distance away from Hoover Cake Shop until it was decommissioned in 1998. 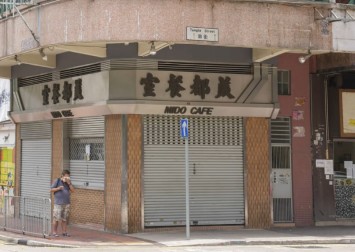 "Hopefully, with the tourists coming back in and people flying again, we can identify a good space for the new bakery," she says.

"[Saying] goodbye to the neighbourhood has been kind of tough for her," Liu says of Mrs Chow, but stresses that they haven't ruled out the possibility of returning to Kowloon City in the future.

As the plan to take over Hoover Cake Shop was only formalised in the last week, Liu says she will need more time to figure out the shop's footprint and future plans.

She promises that the "characters" who make Hoover Cake Shop special will be retained, including Fu Gor and Kou Jie, the long-time cashier who has been with the company for the best part of two decades.

A staff member who answered the phone on Friday evening declined to comment, saying only that they were exhausted.