Coronavirus means working from home for many. But some say it's easier said than done.

The first two of weeks of working remotely was professional bliss for Yesiska Putri, a 24-year-old project supervisor at a digital technology firm in Jakarta.

Despite growing concerns over the novel coronavirus pandemic, her team had breezed through every assignment from home, seemingly empowered by the liberation from conventional office space.

"We've been working from home for almost four weeks now. I felt very optimistic during that first half as productivity among my team members only seemed to have increased," she told The Jakarta Post on Tuesday.

What started out as an ideal work situation, however, gradually turned into a seemingly inescapable rut. After working within the confines of her house for two weeks, anxiety started kicking in.

"After two weeks, I've grown anxious and bored. I've also felt less energised than usual since I'm always cooped up at home," she said, adding that working during the self-quarantine period had also begun to take a toll on her physical health.

For Jessica Khairunnisa, working from home has been significantly more stressful than getting things done at the office.

The 24-year-old who works for a telecommunications company in Jakarta noted that daily communication with her colleagues and supervisors had become a constant struggle as work moved at a faster pace due to a revamped workflow.

"My workload has increased since I started working from home. Things are expected to move much faster now. What's worse is that I can no longer meet with my coworkers and have a good laugh during breaks to lighten the mood," Jessica said.

She went on to say that working from home had also made her less aware of when to actually stop working. The absence of an established structure that traditionally defines "work" had also negatively affected her sleep cycle, leaving her fatigued during the day.

"I can't sleep peacefully. It's almost like [I'm attached] to my laptop," Jessica said.

The two women are among those in capital Jakarta - the epicentre of the country's coronavirus outbreak - suddenly made to hunker down and work remotely from their own homes as companies adjusted to the government's call to flatten the curve of Covid-19 transmission, which has largely remained unabated. 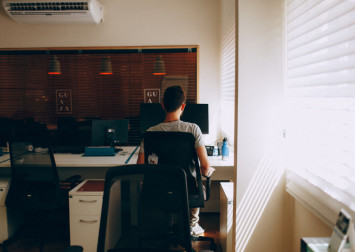 Health authorities had confirmed at least 1,369 Covid-19 cases in Jakarta as of Tuesday afternoon, making up nearly half the country's official tally of 2,738 infections. There were more than 100 fatalities from the disease in the capital city out of a nationwide death toll of 221.

As of Tuesday, more than 3,300 companies across the capital have put in place work-from-home policies for some 1.2 million employees in response to the outbreak, allowing workers to get their jobs done without having to go into the office, according to the Jakarta Manpower, Transmigration and Energy Agency.

Working from home is apparently the new normal. For those who were already used to the rigid structure and logistics of office space, however, it is obviously easier said than done.

David Abraham, the cofounder of Outpost coworking space, said the importance of a work structure could not be overstated during these unprecedented times.

The seemingly open-ended nature of working from home - where there is no specific cue that tells employees when to start or stop working - had been a common concern among those who had been thrust into the new workflow, he said.

"We must first realise this is not the ideal remote work situation. We're in the middle of a pandemic, after all. Once we've acknowledged that fact, we will be able to regain control of the situation and create a semblance of structure," Abraham told the Post.

He called on companies to be more understanding of the situation and adjust accordingly. Minor gestures, such as having employees stand up during "virtual happy hours" and encouraging them to set aside time for physical exercise, for instance, might increase engagement within the digital workspace, he said.

Read Also
I've been working from home for more than a month. Here's what I've learnt so far 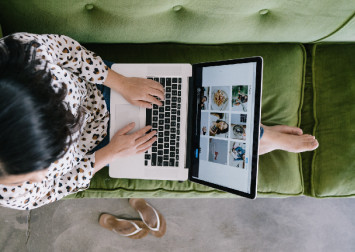 Employees should also specifically establish "work" and "life" spots in their home to keep the balance between both elements of their lives in check during self-quarantine, he said.

"The tools we use for work now are also the ones we use for pleasure. Designate a little spot in your room where you work; walk away from it when you're supposed to be finished working. Create structure, create space," Abraham said.

Yesiska has since found solace in binge-watching her favourite movies and shows on streaming services in her free time.

Listening to podcasts while working has also helped her regain her sense of focus and drown out negative thoughts amid the health crisis.

Meanwhile, Jessica copes with the pressures of working from home by talking to her close friends and colleagues through video calls in her spare time, checking in on each other amid dire circumstances.

"It's how I keep my mental health in check," she said.