Designs for dementia sufferers that reinvent their world

Pascal Anson poses with jackets he designed that are both wearable by and instructive for those living with dementia. They feature in the first OK Dementia Festival in Hong Kong.

Dementia is an incipient public health catastrophe. The World Health Organization (WHO) estimates that 55 million people are afflicted, with some to be found among Hong Kong’s ageing citizens.

Solutions offered to the dementia crisis tend to be scattergun – an approach the organisers of the first OK Dementia Festival in Hong Kong hope to change.

The one-month festival organised by the Hong Kong-based Enable Foundation – a social design collective and education charity – started on Sept 21, World Alzheimer’s Day, and concludes with a collaboration with the British Council initiative, Spark: The Science and Art of Creativity (Oct 20-23).

From his London studio, British designer, Royal College of Art tutor and Enable adviser Pascal Anson sheds light on the uncoordinated approach that’s taken to dealing with the difficulties dementia sufferers face, and on how innovative design can help.

“With dementia, a health care professional might say, ‘You need these tablets to make the problem better.’ Then there’s the occupational therapist’s solution, which is, ‘We can make these changes to make your life better,’” he says.

“There’s social-worker problem solving, which is, ‘Ok, we can get funding for you,’ then an engineer could come in and say, ‘You know what? We’re going to put wheels on everything so it can move around.’

“It’s very much problem-solution in each case. The Enable Foundation is trying to find another way of problem-solving; rather than saying, ‘This is a person who has cognitive problems, this is the solution,’ we’re considering it much more holistically.”

Read Also
Caregiver guide: How to start keeping a dementia journal for your loved one 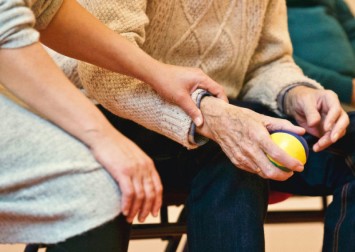 This approach finds vivid expression in a set of five blue Enable jackets designed by Anson that feature in the festival. Instructive for those living with dementia, the garments are also designed to help non-sufferers understand how daunting an everyday task, such as donning a coat, can be to someone with dementia.

“The jackets have a really clear way of doing that,” says Anson.

“We found that a numerical sequence – which could be left arm, right arm, collar, buttons one, two, three – was quite difficult to remember. But we asked one of our case studies if they could remember ‘do-re-mi’; so putting on the Do Re Mi version of the jacket follows the ‘do-re-mi-fa-so …’ sequence.”

Nor does the design ingenuity stop there.

“There’s no wrong or right way to wear it,” adds Anson, “so we made it into a sort of cape. You can even wear it upside down: We realised that if you’re helping someone with dementia get dressed, rather than just correcting them, what if there’s no wrong way? In the street, it just looks unusual so there won’t be people pointing. It looks like some high-fashion creation.”

“Many things make it difficult, some visual, some structural, some to do with the shape, some with mechanical function – like trying to fit a massive button through a small eyehole.”

Among other dementia-inspired pieces by Anson is “a product called Time Table, for one of the 10 Hong Kong NGOs [involved in the festival], which allows people with dementia to discuss time in a non-numerical way”.

He has taken part, with Enable, in events in Denmark and the Netherlands which showed him that “each place deals with dementia in a completely different way”.

“The festival is about realising it’s not just the patient who is affected by dementia, it’s everybody: Health care workers, family, wider society,” Anson says.

Also aiding cognisance, a disconcerting chequerboard bathroom and light switch installation, by Enable with designers Mr Hammer and Cyril Lee, “shows how difficult it can be for someone with dementia to understand things spatially”, Anson says.

These items – which Anson regards as “communication tools” – contribute to the foundation’s mission, which is “to enable citizens to participate in enacting social change through design”, to raise awareness, reassure and help find new ways to address problems.

“We are not saying dementia is ok, but trying to allow people to feel ok with it. So, when you wear that jacket upside down, it doesn’t matter. You won’t feel ashamed or stupid; the person with you won’t feel self-conscious,” says Anson.

“It’s really important, because the title comes from trying to reinvent the world in which people with dementia live.”

Information about the OK Dementia Festival’s collaboration with Spark 2021, including an online workshop, Design Your Dementia Things (Oct 20), and forum (Oct 22), can be found here.