Facts about the elbow: How to avoid tennis elbow, why it's called the funny bone and where 'elbows off the table' came from

You might not give it a second thought – unless you’ve hurt it – but the elbow is one of our body’s major joints. It allows us to carry out several everyday actions, such as rotating the hand or lifting an object.

Involving three major bones and many ligaments and tendons, the elbow is prone to injury. We consider how to care for the joint, whether it is only tennis players who suffer tennis elbow, why it’s called the funny bone and why we’re not supposed to put ours on the dinner table.

The elbow is where the humerus, which runs from the shoulder, meets the radius and ulna bones in the forearm. These bones are held together by tendons and ligaments, the most important being the ulnar collateral ligament (UCL) and the radial collateral ligament (RCL). The UCL connects the three bones and the RCL is on the outside of the elbow and prevents overextension.

Another important part of the elbow is the ulnar nerve – commonly known as the funny bone. The origin of this phrase is uncertain; it could be a play on the word humerus, or because of the “funny” sensation we get from hitting the nerve – a mixture of pain and a tingling sensation that extends to the fingertips.

The ulnar nerve runs from the spine to the shoulder and down to the fingers, and is protected most of the way by bones and muscles.

However, when it reaches the elbow it travels through a 4mm wide unprotected channel – the cubital tunnel. That’s why, when you hit your elbow in just the right spot, you directly hit the nerve, resulting in that “funny” feeling.

Dr Diane Tai, a Hong Kong specialist in orthopaedics and traumatology, explains that the elbow is prone to overuse injuries such as tennis elbow. The repetitive movement in certain sports or other daily activities triggers inflammation of some tendons.

Tennis elbow causes pain around the outside of the elbow and forearm. The condition – clinically known as lateral epicondylitis – is often triggered by tennis players hitting backhand strokes.

World number one Novak Djokovic took a break from tennis in mid-2017 to allow his injured right elbow to mend, and had surgery on it in 2018. Tennis star Zhang Ling had to quit the sport in 2020 after more than a decade as Hong Kong’s number one because of tennis elbow.

Despite its name, the condition can be caused by any repetitive motion: painting, using hand tools, chopping ingredients, and even using a computer mouse.

So what should you do if you suffer from tennis elbow? First, stop the activity that caused the problem and rest the elbow. At home, you can apply a cold compress several times a day and take over-the-counter painkillers.

Hong Kong orthopaedic surgeon Dr Sally Cheng adds that the elbows can be prone to injury because we use them to break our falls, or they might suffer a direct hit resulting in bone or ligament injuries.

The elbow’s epicondyles – the two round bits sticking out at the end of the humerus – are particularly vulnerable, and bone fractures here are the most common short-term elbow injury.

Using a trampoline is a frequent cause of elbow fractures and breakages. According to a 2014 report in the Journal of Paediatric Orthopaedics , between 2002 and 2011 a million people in the United States had to go to hospital after a trampoline accident, and 19 per cent of their injuries were elbow fractures.

In Hong Kong, trampolining was once a part of school physical education classes, but after a trampoline accident in 1991 that left the victim a quadriplegic – paralysed from the neck down – its popularity dwindled.

Of course, prevention is better than cure, and Cheng and Tai offer advice on how to avoid elbow injuries. Tai recommends specific exercises to strengthen the forearm muscles; using an elbow splint or band if you are experiencing pain; using a lighter racket with a larger grip for tennis or badminton, and; doing warm-up stretches before sports – especially rackets sports.

While many people will never experience elbow trouble, more than a few may have attempted the impossible task of licking their own elbow. Guinness World Records says it receives five claims a day from people saying they can touch their tongue to their elbow.

Read Also
These men used Iyengar yoga to banish knee and back pain, and control diabetes 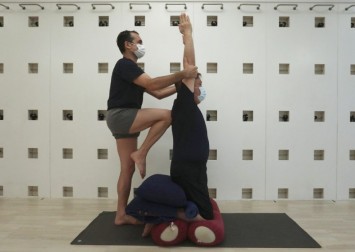 Another peculiarity of the elbow is that while the ulnar nerve makes the bone extra- sensitive, the elbow’s skin is the opposite – you can pinch the skin as hard as you like without causing yourself pain. This is because the skin on your elbow has fewer sensory neurons than many other areas of the body.

And what of the age-old adage “elbows off the table”? The phrase could originate from the Bible’s Book of Ecclesiasticus, which declared putting one’s elbows on the table as outrageous as breaking an oath.

Funny bones, tennis elbow and table manners – this joint is not simple. Whether you play a lot of tennis, practise elbow licking, or spend time on a trampoline, spare some thought for that arm-bending hinge.