Five mountains to hike in East Java besides Mount Raung

Mount Bromo with white ash coming out from its crater and Luhur Poten Temple near to its slopes (below).

Officials announced that Mount Raung in Bondowoso, East Java, is closed to hikers following a fire that began on Friday evening.

Agus Wibowo, head of the National Disaster Mitigation Agency's (BNPB) information centre, said 13 hikers were rescued on Saturday morning and that there were still hot spots on the mountain.

For hikers in the area, kompas.com has compiled the following list that includes other mountains that are open and safe.

Mount Bromo is among the most famous mountains in Indonesia. It is also a favourite for travellers and hikers alike as the mountain is perfect for those on a beginner level.

With minimum challenges, hikers can enjoy the beauty of the crater and the sunrise view on Pananjakan Hill. On the bottom, the vast sandy plain around Mount Bromo is also a view like no other.

Located in Banyuwangi, it is famous for being the only mountain in the world with blue fire coming out of its crater. Travelers flock to the site also to witness its turquoise-green sulfur lake.

To get to the crater, hikers would need to walk a rather challenging trail that takes approximately 2.5 hours to finish. The mountain is also considered suitable for beginner hikers.

Some call the mountain small but mighty. Located 1,731 meters above sea level, the mountain is often thought easier to hike than its taller counterparts.

But the challenge lies in its high temperature, along with water scarcity. Should they be up to the challenge, hikers are advised to bring enough water to cover the four to six hours it would take to reach the top.

A legend says that Princess Rengganis of the Majapahit Kingdom disappeared on Mount Argopuro along with her six ladies-in-waiting.

Read Also
Six mountains for beginners to climb in Indonesia 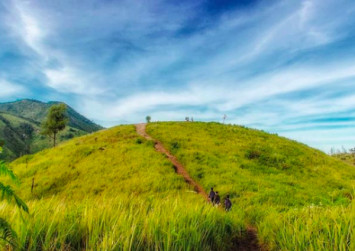 Hikers are bound to meet the Cikasur savanna and a variety of wildlife that includes boars and deer upon coming down from the top.

The mountain also features the Living Park Lake that's surrounded by lush vegetation. When the occasional fog comes down, it makes quite an ethereal view.

At 1,653 m above sea level, the mountain is a favourite among hikers as it is considered safe for beginners.

Mount Penanggungan is also where one would find hundreds of ancient Hindu and Buddhist sites on its slopes.

Tami Ajeng trail is regarded as the safest for hikers and it would take about four hours to get to the top.