Good grief: Funeral director who demystifies death for Singaporeans, and why her focus is on helping the living

Described as a 'spa service' for the dead, Showers of Love, offered at Ang Jolie Mei’s Singapore funeral home The Life Celebrant, enables family members to give their loved ones a final, personal send-off.

Ang Jolie Mei makes plans for us to meet in her office in Singapore on a Tuesday morning. “Come to our facility so you can see the work we do,” she says enthusiastically. She provides directions to a street locals commonly refer to as “Death Alley”.

The night before the meeting, though, the funeral director calls and says apologetically that we’ll have to meet at her home. Her office “has a job in the morning”.

For a woman who faces death on a daily basis, Ang is surprisingly chipper. We meet in her chic walk-up apartment in the city state’s trendy Tiong Bahru district. As we sit by a glass bay window, Ang’s bright-eyed 10-month-old plays nearby in the airy, Scandinavian-inspired living room.

Just a 20-minute drive away is Ang’s funeral parlour, on a street lined with dozens of other similar businesses – hence the sinister nickname.

The daughter of Singapore’s “Coffin King” Ang Yew Seng – a funeral director who earned the title after providing free ceremonies for the poor – Ang has been in the industry since her father died in 2004.

Her family is well versed in the business of death: Her younger sister is an embalmer, and her mother still runs her husband’s business, Ang Yew Seng Funeral Parlour.

It explains Ang’s measured approach to a subject that many – especially in superstitious Asia – would rather avoid.

Ang released the second edition of her memoirs, Dying to Meet You, in July. In her book, the 40-year-old describes what goes on in the embalming room (one chapter is dedicated to the intricacies of preserving the dead; an S-shaped needle, for example, must be used to suture the skin back together, since skin cannot be bent and gathered like cloth); details various funerary traditions in multicultural Singapore; and debunks myths, such as the one that people who die with their eyes open did not die peacefully.

“Even when someone dies with their eyes closed, their eyes will gradually open, since slackened eyelids fall back,” Ang says matter-of-factly.

The updated book even contains a section on Covid-19-related deaths and ceremonies, and Ang’s difficulties in handling them.

Ang started her own funeral home, The Life Celebrant, in 2010. While it deals mainly with the prosaic aspects of a death – such as renting venues for a wake, embalming bodies and ensuring that disgruntled or estranged family members don’t disrupt the proceedings – it offers some unique services, including a “spa” for the deceased and special funeral ceremonies for infants, young children and fetuses.

“When you have an abortion, the gynaecologist will usually tell you to dispose of [the fetus] as a biohazard waste or keep it in a sterile medical container,” says Ang. “But I disagree with the term – because every single person has a life, no matter how brief it is.” Her Angel Star initiative offers tiny padded caskets in cheery pinks and blues, stocked with plush animals.

Ang explains that most fetuses aborted in the first few weeks of pregnancy emerge essentially as broken blood clots; she admits that “there’s not much to cremate”, but that it’s symbolic nonetheless.

“I met a lot of parents who felt incomplete because they couldn’t say goodbye properly,” says Ang. “By doing a dignified ceremony, it helps parents take the edge off.”

Showers of Love is the name of Ang’s “spa” for the deceased. It allows family members to give their loved ones a final, personal send-off – one that includes giving them a shower and, sometimes, even a face mask.

An all-female staff helps the family with the process, guiding them as they do the hair, make-up and dressing for their loved one. Ang believes their family, rather than a stranger, knows how best to dress the deceased.

“People used to think I was crazy: why would people want to see their dead loved ones being showered, let alone give them a spa treatment?” says Ang, who began the service in 2017. “But before I started Showers of Love, I kept hearing this common thing where people had bad experiences with other funeral homes.

Ang knows about having regrets. Her father’s sudden death in 2004 left the family distraught. “We couldn’t even decide on what photograph to use at his funeral,” Ang says. “We just assumed what he would like.”

Her father did not want Ang to join the family business – “because we’re women, our dad never asked us to come help out” – but that didn’t mean she kept away from the funeral parlour. She recalls one case her father had when she was a teenager: a corpse had such a badly damaged face that the parlour’s staff forbade her from looking at him. But Ang wanted to – not out of some morbid fascination, but rather to understand every aspect of the business.

She says the only downside to being a woman in the funeral industry is the risk of injury during the embalming process. “The top occupational hazard is back injury,” she writes in her book, “usually sustained from having to frequently lift heavy bodies.”

Occasionally, she has to deflect advances from male mourners. “There was this guy who was planning for his mother’s funeral. When he was talking to me, he was trying to be pervy and put his arm around my waist,” she explains. “But we know where to draw the line.”

Ang and her staff of nine – of whom seven are women – handle from 10 to 20 funerals a month. They are intimately familiar with the traditions of different religions.

For example, she always makes sure to place a pearl 1cm to 1.5cm (0.4 to 0.5 inches) in diameter in the mouth of a Taoist believer, which ensures that they are able to “bribe” the judges in hell, thus affording them a smooth journey into the afterlife.

In recent years, Ang says, the way Singaporeans plan their funerals has changed dramatically. “In the past, people would look purely at the casket when planning a funeral – whether it was made of good wood or had sturdy handles,” she says. “But now, the focus has changed. It’s no longer just about the casket, it’s about the experience.”

The country’s diverse ethnic make-up has led to a rise in inter-religious ceremonies. But that diversity can sometimes lead to conflict: several years ago, Ang attended to the funeral of a Chinese Taoist man whose son and daughter had converted to Christianity and Islam, respectively.

Both had refused to kneel and offer joss sticks in the Taoist tradition, much to the horror of their traditionalist mother.

Ultimately, it was the deceased’s Muslim son-in-law who broke the impasse and knelt to offer the incense. The man’s daughter and son relented and followed suit.

Read Also
Before I Was Boss: She's the 'accidental' funeral director 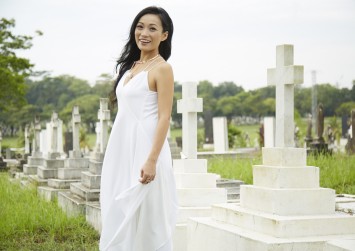 Ang is a strong advocate of planning one’s own funeral (she has, of course, planned her own; she wants to be buried with her beloved salsa shoes), not least because of her father’s abrupt death.

“I’ve got cases where people would just guess what the deceased would like. They’ll go: ‘Oh, would Ma like this outfit?’ But you’ll have this guilt,” she says.

To Ang, her work as a funeral director transcends giving the dead a dignified send-off. She wants her work to help the living work through their sorrow better.

“I believe that with a good farewell you will have a better grief process, because when you feel like you have regrets, all these things will live in your memory,” she says. “There are many people that approach me after my presentations, after reading my book, and tell me: ‘If only I knew you were around’. I want to help more people avoid that ‘if only’.”