The full moon occurring closest to the autumnal equinox is significant to communities worldwide, and celebrated in many Asian countries as the Mid-Autumn Festival, focusing on family reunions and venerations of the moon.

The foods associated with the festival comprise crops typically harvested in northeast Asia during this season, whose forms or names convey auspicious meaning.

The pomelo, whose spherical shape signifies the full moon, is "youzi" in Mandarin, identical to the word which means “bless (the children)”. Similarly, the name for lotus root in Mandarin is homophonous with “togetherness” plus “pair”, with its growth in sections representing new opportunities. The pronunciation of taro – "yutou" is similar to another term that means “good luck is coming”.

Water caltrops, on the other hand, are jet black, and, shaped with pointed ends resembling a bat or bulls’ horns, are known as “water caltrop” plus “horn”. Though not moon-like by any means, their form earns them the alternate names of buffalo nut or bat nut – and with the word for “bat” – "fu" in Mandarin – being homophonous with the word for “prosperity”, serving and eating water caltrops is thought to bring good fortune. 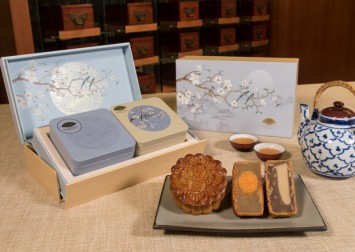 And what would the festival be without its mooncakes? Originally a calque from the Chinese "yuebing" which means “moon” plus “cake, pastry” – an early mention is found in a 1688 translation of Portuguese missionary Gabriel de Magalhães’ A New History of China, which describes “Yue Pim, or Moon-Cakes. They are round […] and represent the Full Moon” – the word is now included in the Oxford English Dictionary.

Mooncake pastry encloses a filling of ingredients auspicious in name or form, such as lotus seed paste, or, in the Cantonese version, one (or up to four) salted duck egg yolk, again representing the full moon.

But mooncakes have not only symbolic meaning; they have been associated with explicit communication. Legend tells how 14th century Ming revolutionaries secreted messages within mooncakes to organise a united uprising on the night of the 15th to overthrow the Mongols.

Political messaging has also been channelled by mooncakes more recently, where, in Hong Kong in 2019 and 2020, pastry featured – rather than the usual auspicious decorations or characters for “harmony” or “longevity” – pro-democracy slogans.