A still from a video posted by Michel Gaubert, the fashion world’s favourite deejay, from an Asian-themed dinner he attended in Paris at which guests held up slant-eye masks and yelled “Wuhan girls” in reference to the coronavirus first detected in Wuhan, China

The fashion world’s favourite deejay, Michel Gaubert, a long-time collaborator of top brands such as Chanel, Fendi, Dior and Valentino, has come under fire for posting a video from an Asian-themed dinner he attended in Paris.

Gaubert, who likes to call himself a “sound designer” and is responsible for the music of many top shows during fashion week, has since deleted the clip, which shows guests holding cut-out paper masks with slanted eyes while yelling “Wuhan girls, wahoo!”.

Fashion figures such as Susanna Lau aka Susie Bubble , Bryanboy and Instagram account Diet Prada were the first to condemn the video.

Lau called it “patently racist” and “an Asian version of blackface”.

After being called out on social media, Gaubert apologised to his “Asian friends” in a lengthy Instagram post, explaining that the masks were designed six years ago by an artist friend who takes pictures of her dinner guests wearing them every week. 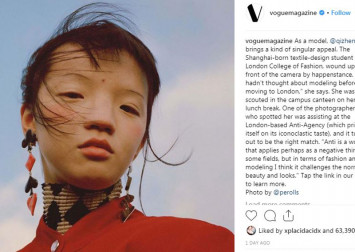 The episode comes amid a rise in anti-Asian violence in the United States and around the world during the coronavirus pandemic.

First detected in Wuhan in China, in December 2019, the virus has since spread throughout the world, but its association with China has remained, thanks in no small part to political figures such as former US president Donald Trump, who – while in office – often referred to the virus as the “China virus” or “Wuhan virus”.

According to a study by Stop AAPI Hate, a non-profit social organisation that tracks incidents of discrimination, hate and xenophobia against Asian Americans and Pacific Islanders in the United States, there have been almost 4,000 racially motivated attacks against Asian-Americans since lockdowns to curb the spread of the coronarivus began in the US just over a year ago.