H&M's first collaboration with Chinese designer to be sold in Asia, Canada

Swedish fast-fashion giant H&M has teamed up with a Chinese designer on a capsule collection for the first time. The clothing range designed with Angel Chen will launch in September 2019.

"I am grateful and privileged to have this opportunity to work with H&M to launch its first Chinese designer collaboration collection," Chen said in a statement. "With the development of the global market, more Chinese designers are stepping on the international stage. And I hope that through this collaboration, more people will pay attention to Chinese designers, and also the Chinese culture and spirit behind their designs."

The collection, which according to H&M "features an urban wardrobe of versatile pieces with strong Chinese elements in highly saturated colours like oriental red, bubblegum pink and bright yellow", is yet another sign of the rising clout of Asian designers, both on their home turf and globally.

As Chinese consumers become more savvy and sophisticated in their choices, they have started to gravitate to home-grown brands, such as sportswear label Li-Ning, or to Chinese couturiers such as Guo Pei and Grace Chen.

Unlike H&M's other designer collaborations, which are always available at the chain's stores around the world, this range will only launch - in selected stores and online - in China, Hong Kong, Taiwan, Singapore, Malaysia and Canada, as well as online in Macau and the Philippines, and in H&M's flagship store on leading Chinese e-commerce website Tmall. (Tmall is operated by Alibaba Group, owner of the South China Morning Post.) 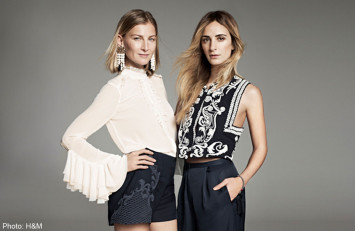 H&M's distribution strategy shows that the company is targeting an Asian audience with this range, and implies that Chen's wares may not appeal to consumers in the United States and Europe.

Its upcoming range with couturier Giambattista Valli, on the other hand, will be available around the world in November.

Most of the stores that carry Chen's own fashion line are in China, but the designer has stockists in countries such as the UK, Italy and the US, and her line is available at prominent online retailer luisaviaroma.com. She also shows her collections at Milan Fashion Week.

While collaborations between mass retailers and fashion designers have become the norm in recent years, H&M pioneered the practice.

Its first collaboration, with the late Karl Lagerfeld in 2004, made headlines and was later followed by other high-profiles partnerships with brands such as Lanvin, Versace, Jimmy Choo and Moschino.