How alcohol-free beer, wine, spirits capture the taste of the real thing

Lyre’s Dry London Spirit non-alcoholic gin. As more drinkers go alcohol-free, companies are reacting with ever-more convincing non-alcoholic beers, spirits and wines. But can these healthier alternatives ever really capture the magic of the boozy originals?

With more consumers opting to go alcohol-free, what does it take for companies to nail that true-to-taste non-alcoholic drink?

Sydney-based Alexandria Brock decided to go dry in 2019 after her "very boozy wedding and honeymoon".

Having worked as a bartender for a decade at watering holes in the Australian metropolis like The Clock Hotel, Paddo Inn and the Bowral Hotel, Brock recalls that, at first, the thought of life without cocktails was daunting.

"For the first few months of my sobriety, I didn't mind soda water and Diet Coke," she says. "But that became boring and people notice and ask questions when you're not drinking alcohol – so today, quality alternative drinks mean everything."

Current trends and statistics suggest that Brock is right. During the coronavirus pandemic, nearly 30 per cent of 16- to 24-year-olds surveyed in Britain declared that they no longer drink alcohol.

According to market researcher Trends.co, global sales of non-alcoholic beers have climbed 90 per cent over the past decade, and that is partly due to consumers wanting to decrease their alcohol consumption for wellness reasons.

The figures are also testament to the quality of the alternative products, with non-alcoholic beers tasting very similar to their alcoholic counterparts.

With its lower alcohol content (averaging 5 to 7 per cent as opposed to double figures in wine and spirits), retaining the flavour of beer when removing alcohol is a lot simpler, and allows the mindful drinker to never miss out on a good pint. 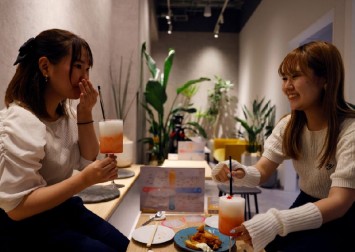 The thirst for non-alcoholic drinks is only growing among individuals such as Brock, who now works as the global assistant brand ambassador for Lyre's, one of the world's pioneering non-alcoholic spirits brands.

Compared with when she stopped drinking alcohol in 2019, Brock has seen an astounding increase in the variety and availability of non-alcoholic drinks designed to replicate the taste of the real thing.

She believes that the range of products available today shows that there is a higher demand, and that drinking culture is well and truly changing.

"The most impressive thing about some non-alcoholic options is being able to drink something alcohol-free that is so close to a classic cocktail," she says. "I can still enjoy my favourites like an old fashioned, a negroni or an Aperol spritz without compromising on the look, taste and experience."

Although there is a growing faction of non-drinkers, non-alcoholic spirits, wines and beer are not only for people who have ditched alcohol altogether. In fact, 80 per cent of Danish company ISH Spirits' consumers do enjoy alcohol and simply want to moderate their intake without compromising on the experience.

"It's kind of like having a veggie burger once in a while without necessarily being a full-on vegetarian," says ISH Spirits founder Morten Sorensen.

Sorensen founded the drinks company in 2018, after completing a 100-day alcohol-free challenge and realising how difficult it was to find satisfying drinks alternatives. "That was the inception of ISH with the purpose of wanting to make it easy for anyone to be a mindful drinker," he says.

Creating the well-known taste that consumers such as Brock and Sorensen are after is a complex process that requires precision, expertise and profound knowledge of textures and flavours – skills that David Murphy, the global flavour architect at Lyre's, has applied to his growing portfolio.

The brand now has more than 17 products, made using a range of extracts, distillates and macerations to create the right balance of flavours.

Murphy believes that the best results come from using the same base ingredients as the original spirits. "For example, we use juniper, jasmine and angelica in our Dry London Spirit, a non-alcoholic gin style, or if we are creating an Aperol, we'll use orange and gentian," he says.

Trial and error also plays an important role in the production of alcohol-free spirits. In creating the Lyre's Agave Blanco, Murphy tasted premium tequilas from various regions, including high- and low-altitude agave plantations and "single plot" plantations to get a good, general feel of what type of agave spirit he wanted to create.

He would write his tasting notes down, and having determined his desired tasting profile, he would look for those specific ingredients – such as camomile, coriander, agave, pepper and honey – and test to see how they interact or "talk" to each other.

"In the end, we worked through over 70 versions of the Lyre's Agave Blanco formulation before we thought we had the right balance and flavours. This single product took eight months to develop," says Murphy.

He adds that he aims to produce a non-alcoholic aged (reposado) tequila next, which has the influence of oak.

"Some of our products can take months to get right and our Highland Malt, which has just been released, took over three years to perfect," says Murphy. This "whisky" is the first in the brand's line-up that is designed to be drunk neat.

Just as only sparkling wines from the Champagne region of France can be called champagne, most spirit names are protected or highly regulated. For example, gin must have a minimum strength of 37.5 per cent alcohol by volume (ABV) and no flavourings can be added after its distillation.

Similarly, the minimum alcoholic strength for rum is 37.5 per cent ABV in Europe and 40 per cent ABV in the US – and the only permitted ingredients in Scotch whisky are cereals (barley, wheat, rye or grain), water and yeast.

According to Murphy, protecting the original style of spirits is important so that they have integrity and maintain a sense of provenance.

Lyre's Highland Malt, Dry London and White Cane Spirit, as well as ISH's Mexican Agave Spirit and Caribbean Spiced Spirit (to name just a few), hint at the flavour profile of the product without giving too much away.

In the production of alcohol-free wine, the ethanol is either completely or partially removed after the wine is produced.

The two most common methods used are vacuum distillation, a process that heats up the wine and allows the ethanol to gently evaporate, leaving behind an alcohol-free wine; and reverse osmosis, where filters remove the compounds responsible for aroma and flavour before the alcohol is removed by distillation.

The latter is widely preferred, although more expensive, as it more effectively retains the pleasant aroma compounds associated with wine, which tend to escape with evaporating alcohol.

The results can be hit and miss but, when done properly, it is possible to produce a wine that does not simply taste like grape juice. 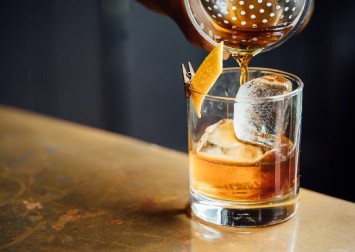 Creating a true-to-taste non-alcoholic wine is tricky, but there are a number of wine professionals ready to take up the challenge.

Julia Littauer is a certified sommelier who co-founded California-based Sovi Wine Co with her husband, Alex, who holds a qualification from the prestigious Wine and Spirit Education Trust.

Between them, they have more than 20 years of wine experience – but still, it is difficult to predict how the product will turn out, they say.

"The wine can end up being thin because the body of the wine lies in the alcohol and, with the removal of the aromatic compounds, the taste can be different to that of actual wine," says Littauer, who is still working to perfect a product with the right balance of tannins, as well as oak and fruit notes.

The Littauers have a modest line-up of canned non-alcoholic wines, including a sparkling brut-style Chenin Blanc, a multi-vintage red blend (comprising Syrah, Malbec, Petite Sirah and other red grape varieties), and a 100 per cent Tempranillo sparkling rose.

There are dozens more non-alcoholic wines on the market, and surely more to come.

ISH will be launching its first still white wine this autumn, and is set to release a still red and rose in the autumn of 2023 – "but only if we succeed in nailing the flavour experience by enriching the de-alcoholised wine with spices, wood extracts and fruits in order to provide the complexity that's lost when removing the alcohol", says Sorensen.

The race to replicate the magic of alcoholic wines and spirits continues.