How did Korean fried chicken become so popular?

It's a yin-yang balance of crunch and tenderness that has in turn created a global obsession.

Interestingly, Korean fried chicken is relatively new even in its South Korean birthplace. As recently as the 1960s, Koreans were still struggling economically so chicken was hardly ever on the table.

As the country's financial situation improved, chicken became a facet of everyday life.

It began with the arrival of rotisserie chicken in the 1960s and became ingrained in Korean food culture with the debut of Korea's first fried chicken franchise, Lim's Chicken, in 1977.

By the 1990s, modern versions of Korean fried chicken had well and truly arrived with the inception of restaurants like KyoChon 1991 and Nene Chicken, both of which opened in the 1990s.

These new modern restaurants popularised different flavour options for fried chicken; KyoChon for example, has almost single-handedly been responsible for the creation of the soy-infused fried chicken variant.

Another notable creation is the crazily-popular yangnyeom fried chicken, which sees fried chicken thinly coated in a sweet-spicy sauce that makes use of another Korean staple - the spicy gojuchang paste.

In Korea, fried chicken isn't fried chicken without a side-serving of beer, hence the word "chimaek" - a portmanteau of the words "chi" from "chicken" and "maek" from "maekju" (which means beer).

Although you can opt for a non-alcoholic beverage to pair with your fried chicken, beer remains the tipple of choice. 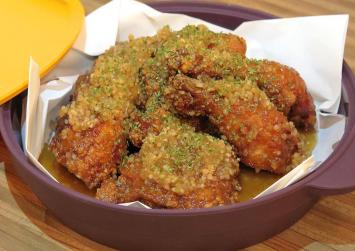 While Korean fried chicken is undoubtedly a hit in its homeland - in 2017, the number of fried chicken joints in Korea was 36,000! - what's surprising is how feverishly the rest of the world has caught on to this hot Korean chick.

Korean fried chicken is now a huge international export, with chains like Bonchon, KyoChon and celebrity chef David Chang's popular Momofuku, having a lot to do with expanding the poultry's popularity to places as far-flung as the United States, Australia, Taiwan, China, the Philippines, Myanmar, Vietnam and Singapore.

According to KyoChon 1991's operations director Joyce Chin, just for their original and red pepper variety of fried chicken, the brand sells an average of 35,000 chicken wings daily across their 14 nationwide outlets. This number surges to 52,000 on weekends.

In line with the growing demand for Korean fried chicken, by the end of this year, Chin estimates that they will have 21 stores and a total of 600 employees.

Chin says there are many factors that have likely contributed to Korean fried chicken's rise on the local front but most prominent among them is the taste factor.

"Everyone has different reasons for liking Korean fried chicken but my personal opinion is that it's much more flavourful with unique flavours such as aromatic soy garlic, burning red pepper and sweet-on-the-lips honey.

"It's also less oily and the very thin batter allows for a paper-thin like crispiness which is different from traditional Western style fried chicken," she says.

This crispiness is also what is most difficult to nail if you're a home cook attempting to make this fried chicken yourself at home. 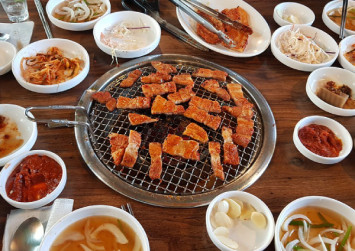 Korean fried chicken is typically lightly battered in corn starch (sometimes wheat flour or rice flour is added too) and then fried not once, but twice.

This is key to solidifying a whisper-thin crispy exterior while retaining moistness in the meat.

It is also what makes it different from Southern-style fried chicken, which is typically soaked in buttermilk first to obtain a thicker crust.

As the chickens used for Korean fried chicken are typically smaller, they crisp up well and are less likely to be tough.

When frying the chicken, you'll have to be patient and wait for the oil to heat up to the required temperature (it should bubble furiously when you put a piece of chicken in).

And trust me when I say patience is a virtue, because if you get restless and toss the chicken into the frying pan too early, you'll end up with a soggy, greasy mess that no respectable Korean fried chicken would want to be associated with.

In the end, if you're willing to put in the effort to make it work, you'll end up with that most elusive of homemade creations: Perfect Korean fried chicken.

TO MAKE THE SAUCE

In a pot, combine all the sauce ingredients and cook until boiling. Reduce heat and simmer until sauce thickens up. Remove from the heat and set aside.

In another bowl, put potato starch. Drop chicken one by one into starch and coat thoroughly. Shake off excess starch.

In a large frying pan, heat up enough oil to nearly completely submerge chicken pieces. When oil is hot enough (test oil by dropping a piece of chicken in, if it bubbles up furiously, it's hot enough), put in chicken pieces. Don't overcrowd the pan as this will cause the temperature to drop.

Fry chicken for 5 to 6 minutes, turning chicken pieces to make sure they don't overcook on one side. Remove from the heat.

Use a skimmer to remove the bits of starch that may have pooled at the bottom of the pan. Heat up oil again until bubbling, then drop chicken pieces in again and fry for 1 to 2 minutes.