How dining is going digital: AR dishes, virtual culinary journeys and high-end meals that will take your breath away

What came first, the 3D chicken or the augmented reality egg? Digital dining is making the transition from fad to mainstream, with interactive, computer-generated feasts being rustled up around the world.

In Thailand, the Park Hyatt Bangkok was one of the first places to embrace the idea in Asia by hosting an immersive 3D culinary journey in the Embassy Room, the hotel’s modern European restaurant, last year.

Starring Le Petit Chef – a tiny, digital cook – a culinary journey was projected onto the dinner table, with the chef muttering to himself as he pottered from France to China and back, following the footsteps of Marco Polo and creating a menu from the dishes he found along the way.

A large supporting cast in the shape of birds, boats and fire-breathing dragons helped to spice up the story.

“The meal could include Arabic cuisine, a touch of spice from India, sorbet from the Himalayas, and steamed sea bass and lobster dim sum from China before returning to France for dessert,” says Sebastian Krack, Park Hyatt Bangkok’s director of food and beverage.

“People love theatre, they love cinema, they love technology, and of course they love eating and drinking, so Le Petit Chef combined all of these. It’s fine dining, but it’s fun fine dining.”

At 3,999 baht (S$180) a head, the digital dining experience ranked as one of the Thai capital’s more expensive meals. However, though it started out as a cautious experiment, Le Petit Chef proved incredibly popular.

The hotel is temporarily closed, but plans are in place to revamp the digital chef’s adventures as soon as possible for guests.

Le Petit Chef – who has also captivated diners in restaurants across Europe and the Middle East – was created in 2015 in the studio of Belgian artist collective Skullmapping, which was founded in 2010 by Filip Sterckx and Antoon Verbeeck.

“The 3D effect in our videos is often thought of as a hologram or a 3D projection,” Sterckx says. “In fact, it is a normal projection. We use special optical techniques and length distortions from the right angle to produce the effect or illusion of 3D.”

Another form of digital dining – augmented reality – is being used by some establishments to give customers a chance to see a digital version of a dish from all angles before they order by pointing their smartphone or tablet at a particular surface.

In New York, burger chain Bareburger and chain bakery Magnolia Bakery are encouraging customers to use such AR food models generated by digital company QReal to view dishes before ordering. The technology is not new, but its presence on a plate is innovative.

“It all started back in 2016 when I invited friends to my favourite Turkish restaurant in New York – Sip Sak in Midtown East,” says QReal’s head of product, Alper Guler, who was born in Turkey.

“I love traditional Turkish cuisine there but there was one problem – none of my New Yorker friends had any idea about the items on the menu. I saved the day by picking all my favourites for the table, but the idea of using AR for food ordering sparked in my mind.

“At the time, my business partner, Caner Soyer, and I were trying to create augmented and virtual reality solutions for the architecture market. I told him about my experience at the Turkish restaurant, and we based our idea around sampuru [Japanese fake food models made from plastic].”

Coming up with a workable solution was not something the pair was able to do overnight.

“To show models through AR, you first need 3D models of the items,” Guler says. “When we started working on the idea, there weren’t any realistic 3D models for food optimised for AR. Creating realistic models for organic products is close to impossible, and it can take weeks to create just one.”

Instead they used a process called photogrammetry, which involves taking photos of an object from lots of different angles and then stitching the images together to create a 3D model.

Once they had photographed the dishes, they spent months optimising the models to create smaller file sizes that would work on AR platforms.

The next hurdle came when QReal tried to sell the idea to a market already being bombarded with tech solutions.

“The only way to use AR was via an app which had to be downloaded. This limited our distribution, but over time, Snapchat, Apple, Google, Facebook and Instagram developed AR features into their platforms and this changed everything for us,” Guler says.

“Now, we are creating end-to-end AR experiences for many well-known food brands – there’s ample time for research while many businesses are locked down – and we are planning to extend our services to fashion, automotives and other markets as well.”

Guler is keen to see QReal expand its food reach further into Asia.

“I can see it being very popular in China, for example,” he says.

“People use mini programs on Baidu and QR codes to access information all the time, and AR can offer an extended experience through these platforms. I also believe the AR food idea can work in the Japanese market to compete with sampuru – it has the advantage of not using plastic.” 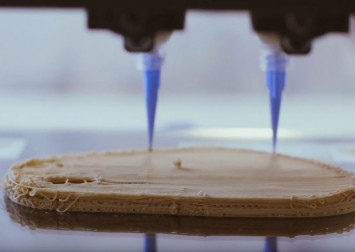 Not surprisingly, Japan has already proven to be something of a pathfinder in digital dining, with Tokyo restaurant Tree by Naked – piloted by multimedia artist Ryotaro Muramatsu – leading the way.

He came up with a dinner that was not so much a meal as an operatic performance, during which the food played second fiddle to digital displays of objects such as branches and petals that appeared to move and grow to depict a tree’s life cycle. The meal was priced at 23,000 yen per head.

“For most people, this sort of experience is something they try once in a lifetime,” says Laura Offe, managing director of The Box Partnership, a food and beverage consulting firm based in Sheung Wan in Hong Kong.

“I took my mother to [experimental restaurant] Ultraviolet in Shanghai for her birthday. It’s run by the French chef Paul Pairet and the food’s amazing, but the whole experience is simply radical.”

A much-lauded trailblazer, Ultraviolet came up with the idea of combining projections, lighting, scent and sound to turn its single 10-seat arena into a virtual world where a mere supper is elevated into a cinematic, multisensory adventure.

It’s proved a hit, with one reviewer gushing: “Ultraviolet finally transgresses the rules, reinvents the restaurant, not to mention the cuisine; this … could be the hospitality, the service, and the cuisine of the 21st century.”

Offe adds that it wasn’t just a culinary experience; it was holistic and amazing because Pairet had thought out every single detail.

Offe says that although somewhere like Ultraviolet has the potential to earn a lot for its owners, it also costs a lot to set up and maintain.

“Digital dining is not a flash in the pan and it’s here to stay – but restaurants are far more likely to use AR,” she says.

“It’s particularly appealing to anyone trying out a cuisine that they’re not familiar with, or if they’re in a bar and want to see what a particular cocktail looks like. Either way, it’s going to have a terrific influence on eating out in the future.”