How halva, baklava and Turkish delight were baked into Chinese cuisine centuries ago, and the mooncake’s Arabian cousin

Travellers with a sweet tooth crossing southern Europe, the Middle East and China would probably be surprised to find they’re eating treats along the way which share a common heritage.

One is halva, a whitish-brown, grain-based confection with a sandy texture which can be filled with honey, pistachio, nougat, almonds or other nuts.

It’s called helva in Turkey and halwa in Arabic countries, but Chinese people know it as sutang – popular variations of which include huasheng sutang (with peanuts) and zhima sutang (with sesame).

The confection’s origin dates back centuries to when Muslim merchants and conquerors travelled throughout Central Asia and into China, bringing with them Arab, Turkish and Persian recipes and treats.

According to Miranda Brown, professor of Chinese studies in the department of Asian languages and cultures at the University of Michigan in the United States, these treats are currently so removed from their Muslim origins that few Chinese people realise that they were once part of the big halva family.

“In the Mediterranean, halva is made today with semolina and has a pudding texture. In the Middle East it becomes tahini [crushed sesame seeds] buttressed by syrup. In China, halva is now mostly a crumbly peanut confectionery, held together with maltose.”

Another Central Asian treat which used to be savoured throughout China, but today only survives in Xinjiang as a snack, is baklava, one of the world’s most famous sweets. The Uygurs call it qiegao and make it with candied fruit, corn syrup, flour and nuts.

This “cut cake” is shaped into large blocks which are then sliced into pieces.

Standard baklava – a paper-thin, crisp, flaky, layered filo pastry oozing with honey syrup and filled with peanuts, walnuts, pistachios or other nuts – is found in Turkey, Greece and the Middle East.

Portions differs in shape and size, ranging from the Greek medium-sized triangles that fit in the palm of the hand to the small, rhombus-shaped bites in Syria and Lebanon.

“Between the 13th and 16th centuries, the Chinese elite had a taste for Muslim pastries and included Muslim sections in recipe collections that circulated in popular household manuals”, says Brown.

“These include halva and baklava that were brought by Muslim merchants and administrators, who worked and lived in Chinese cities during the Song, Yuan and Ming dynasties.

“Some of them were Central Asians, who enjoyed special status during the Yuan dynasty. Others might have been from the Middle East and had arrived in China through the Indian Ocean trade route.”

Brown says that some of these recipes, such as a cheese baklava that appeared in an early 16th century Chinese cookbook from Shanghai, disappeared from the Chinese diet long ago.

Others, like halva, remain popular under other names, and have evolved, acquiring Chinese ingredients and becoming so mainstream that their foreign origins have been forgotten.

These sweets travelled across China during the Turkic Mongol era that brought together Persian, Turkish and Arab traditions, according to Paul Buell, a top Chinese and Asian food historian.

The Turkic peoples, a collection of ethnic groups whose members live everywhere from Turkey to Siberia to parts of China, were middlemen who contributed to the cross-influence of cultures.

“There is an enormous amount of generalised Western and Central Asian food lore in China, including baklava and halva lore, that has been there for so long that it is practically native. North China is a Central Asian society in its history,” says Buell.

In his academic paper “Mongol Empire and Turkicization: the Evidence of Food and Foodways”, Buell translated two 14th century Chinese recipes for halwa (slices of roasted flour with honey), and gullach (layers of bean paste pancakes with honey, ground pine nuts and walnuts), believed to be the oldest known ancestor recipe for baklava, and one which still exists today in Turkey but with different ingredients.

Turkish food historian Mary Isin, author of Sherbet and Spice: The Complete Story of Turkish Sweets and Desserts (2013), says the Turkish word helva stems from the generic Arabic word halwa, meaning any sweet confection, which makes it impossible to trace the exact origins.

“The earliest types were probably made by the Persians in the eighth century, but were not called helva.The Arabs made a variety of confections in the Middle East, some with flour, butter or sesame oil, and honey or sugar. The Turks started making helva in the Seljuk period (11th to 14th century), but we do not know what kind.”

“Over the centuries, many kinds of helva developed. The most famous helva in Turkey and the Middle East today is made with sugar syrup and tahini, but this has only been known since the 16th century probably.”

The “sugar trail” could also trace back to the Ancient Romans, Isin points out, as cakes soaked in honey or sugar syrup featured in medieval Arabic cuisine may have evolved from fourth and fifth century Roman bread or cakes called placenta, made with dried dates and nuts and oozing honey.

Baklava, according to Isin, has the closest ties of any of Turkey’s sweet dishes to the pre-Anatolian Turkish cuisine of Central Asia. During the Ottoman Empire, thin layered sweets were fancy pastries, food for the sultans and a status symbol of wealthy families and sophisticated cooks.

Back then, the best baklava was so fragile that a coin dropped from a height of 26 inches (65cm) would pierce each layer, striking the bottom of the baking tray.

The earliest connection between Chinese and Arabic-Persian pastries could predate the Middle Ages, says Sean Chen, author of Recipes from the Garden of Contentment, the first bilingual edition of Qing dynasty gastronomy book Suiyuan Shidan (1792).

“Things of Central and Western Asian cultures, which the Chinese collectively referred to as ‘Hu’, including ‘Pastries of the Hu’ [known as hubing], were all the rage during the Han dynasty, some 2,000 years ago. With successive waves of influence and exchange with the Persian and Turkic peoples, many of their foods became so embedded within Chinese cuisine that few recognise their origins.”

Chen, a Canadian scientist who develops algorithms for computer-assisted micro- neurosurgery and is obsessed with Chinese food history, has tracked down other sweets with unknown Middle Eastern influences that are hidden in plain sight and strongly rooted in China’s cuisine.

They include shaobing, flattened crispy baked pieces of leavened dough coated with sesame which likely descend from hubing and are a popular breakfast treat in north China. Sweet shaobing are usually filled with black sesame paste.

Given the ingredients and techniques used to make them, says Chen, shaobing is another form of the well-known Central Asian tandoor bread called naan. In fact, shaobing is often baked in a tandoor-like vertical oven, as naan are.

Mooncakes, too, have Central Asian origins, says Chen. “Folklore states that the modern mooncake may have derived from hubing" which evolved into an elaborate pastry filled with various types of sweet delicacies. These were presented as gifts to imperial officials.

The Cantonese-styled mooncake, with its intricate patterned crust and sweet fillings, including lotus seed paste or red bean paste, is the closest variant to the rich Central Asian pastries, says Chen.

Read Also
Nuns were in the habit of creating heavenly desserts, but how did convents become 'laboratories of creation'? 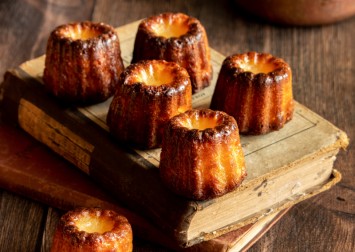 In Chen’s view, other surprisingly similar pastries are the Persian koolocheh, with its soft crust and dense filling, and traditional Chinese wedding pastries, versions of the Cantonese mooncake.

There’s also a Chinese equivalent of the chewy Arabic raha and Turkish lokum, also known as Turkish delight – coloured gels of starch and sugar binding pistachios and other nuts – which is the jujube date walnut confectionery eaten in China since the Song dynasty.

In a Chinese cookbook from around 1200, Chen found a recipe for “sa-bo-ni" which describes forming rice starch in a flat mould to cast a sheet of confection, and then cutting it into lozenges or discs.

"Many [Persian and Turkic] foods became so embedded within Chinese cuisine that few recognise their origins" Sean Chen, author of Recipes from the Garden of Contentment.

He says sa-bo-ni is a loan word that can be traced to several gummy Turkey sweets named sabuniye, made from nuts, flour and sugar. One of these is sabuniye lokumu, a firm, buttery Turkish delight that is still made today in the same manner described in the Chinese recipe.

“The technique of stretching out a blob of malleable sugar into a loop, then twisting and pulling it in starch or flour until it’s thin as floss seems more than a coincidence,” he says.