When Kate Hudson appeared on the red carpet during the Venice Film Festival in September, onlookers would have been forgiven for thinking: “How is she holding that thing up?”

Hudson was in a black dress by Paris-based brand Monot that was more skin than fabric, an ingenious creation with artful cut-outs at the breast and torso, and a hip-high slit. That it stayed on without any mishaps seemed a feat of engineering.

It was actually a simple thing called Yoobtape.

Yoobtape was created by Yen Le, a Vietnamese-Australian based in Hong Kong who realised that women needed a way to support or conceal their breasts without uncomfortable bras or strange nipple covers. It comes as a single- or double-sided tape made from organic cotton in several different widths and colours, and can be put on and removed without the need for talcs, oils or applicators.

Le launched Yoobtape in September 2019, right before Covid-19 hit. While the going was slow at first, in recent months the product has been included in gift bags for the Oscars and the Grammys and has become the go-to resource for a number of celebrity stylists. It was also seen on the runway keeping slits in place at New York Fashion Week, and even on men in low-cut trousers lest they show just a little too much.

Le conceived the product to be worn by anyone in a low top, strapless dress, clingy T-shirt, even swim and yoga wear. 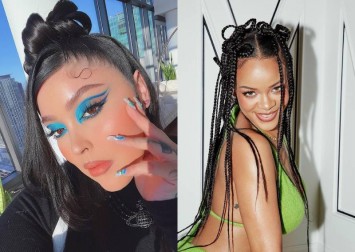 “A lot of women are anti-bra, but they also don’t like the feeling of not having a bra,” she says. “But when you wear Yoobtape, you forget it’s even there. It feels like you’re not wearing anything, but gives you the support and lift you need. If you tape it on a certain way in the morning, you can wear a spaghetti-strap top, but in the evening you can retape it for a bustier. It lasts the whole day.”

Le came up with the product based on her own needs; she has larger breasts and remembers trying to wear spaghetti-strap tops and finding there wasn’t comfortable support.

“I had to find a way to give coverage and the soft, gentle comfort and support that the bust required,” she says. “With this, you just lift your bust, place the tape on top of it, and it pulls the breasts up and makes them look perky. It gives lift instead of just cleavage.”

The designer-entrepreneur left war-torn Vietnam in 1987 with her family and ended up in Australia, where they were housed in a refugee centre in Sydney. When Le’s brother was born with Down’s syndrome, the family’s request for private housing was expedited.

She studied science at university in Sydney and went on to work in banking. In 2013 she took a job in Hong Kong, before realising that her passion “was to help women around the world feel more confident in their clothing”. She would do her corporate job for 12 to 16 hours a day, then work on Yoobtape into the early hours of the morning, running every aspect of it herself.

“When it first came out, people didn’t know what it was, and they hesitated,” she says. “But with more exposure, and celebrities using it, people are more open and willing to try it.”

READ ALSO: Hairstyles that have been blowing up on TikTok, as seen on Choi Soo-young, Billie Eilish and more